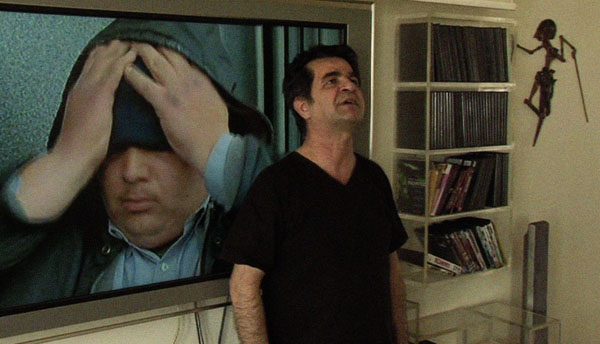 This is Not a Film

Maybe Jafar Panahi wouldn’t, and even didn’t want to, but here he’s desperate. Under house arrest and awaiting a verdict, after being arrested for his recent film efforts, he’s facing a 20-year ban from making movies and six years in prison — all for the crime of making movies that in Western countries would be tame.

this is a forced, and illegal, self-portrait.

Censorship and government crackdowns on art are world-historical norms, unfortunately. Panahi’s plight here is a stern warning, inadvertently, about that fact. Here he shows how much he wants to make a movie. He reads his screenplay to the camera, or part of it, he tries to set up his shots, and he discusses how directing works. He wants to create. He feels like he can’t, and yet he does.

This is one of the many paradoxes of a movie that says in its title that it’s not a film, but of course it is. Panahi and his mentor Kiarostami have been meditating on the difference, or non-difference, between documentary and fictional film for a long time. As Panahi says here, he’s trying to find the “truth” in a scene. Sometimes you can’t do that except through luck, through non-actors’ unexpected movements in the frame, and through trying stuff. One virtue of this film is that it undercuts somewhat the notion of director as auteur, the visionary who imagines everything and then films it. Panahi is a visionary, as we see, but he acknowledges that circumstances matter.

Is this film real? Yes and no, of course.

Now this movie’s backstory and context might be as interesting as the movie itself. Panahi’s friend shoots the movie, and even tells him that he’s the director, not Panahi. The movie was smuggled out of the country on a USB drive. It’s shot completely on an Iphone (and maybe something else?).

This movie is also a bit of a prison diary. It’s wild that there are so many gunshots and explosions in the background, wherever Panahi lives in Iran. Were those real? I assume so. He goes to the window to listen to them at least a couple of times. It sounds like a warzone, in which he’s a political prisoner, who cannot create art.

And yet art seeps out of his horrible circumstance. It always will. One of the triumphs of this movie is that no government can shut down the human desire to make stuff. Panahi defies Iran here. And no government can stop the cheap tech that allows filmmakers to make home-made movies. This is another point that Panahi is demonstrating — developing tech beats censorship, just as offense always in the long run will be defense.

Creation will beat, in the long run, the suppression of creation.