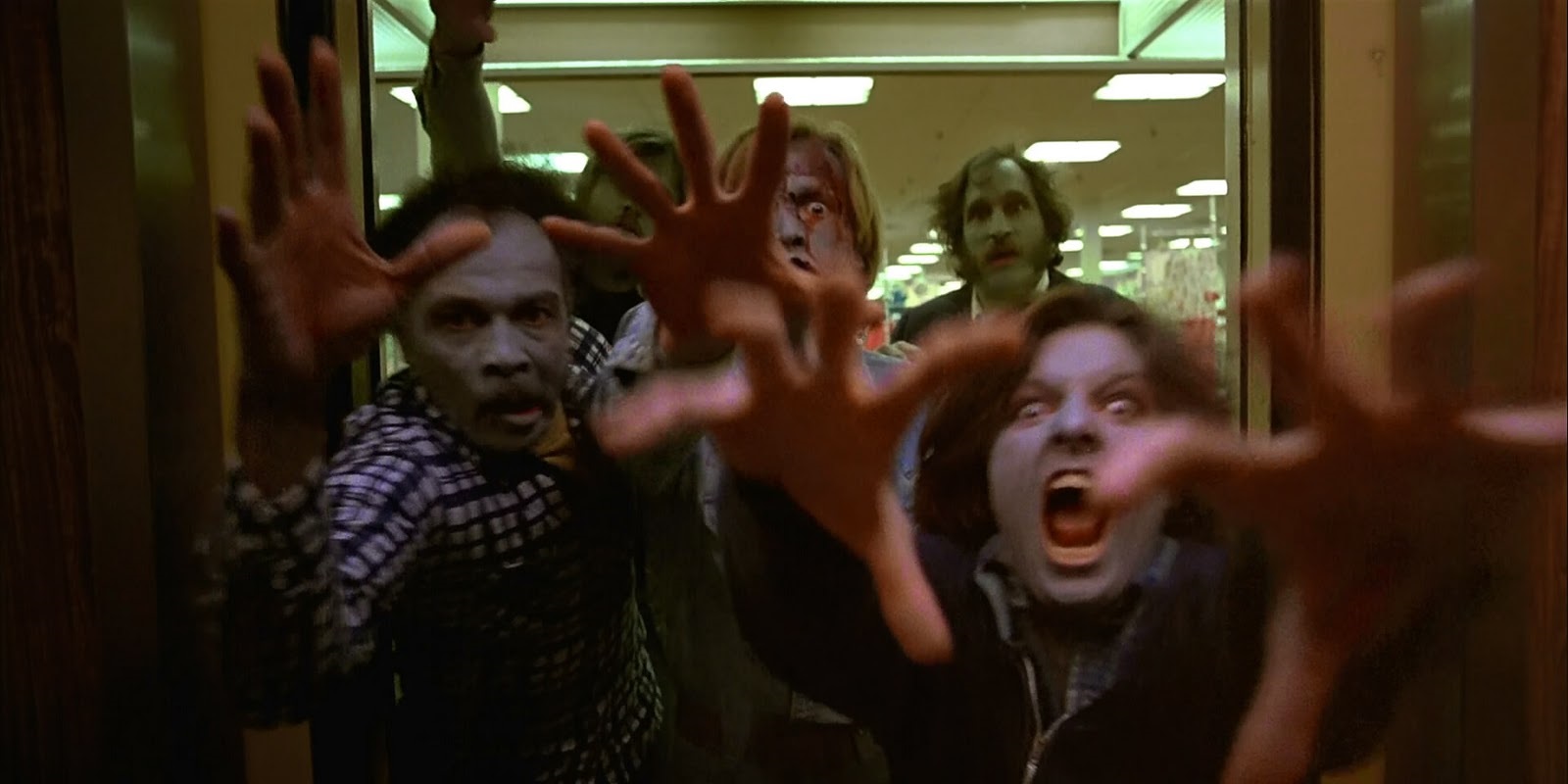 Dawn of the Dead

I knew going in that this movie was partly a critique of American consumerism, by featuring a shopping mall. I had not known, though, the the critique was not just the zombies who instinctly return to the mall, but the idiot protagonists who play around there, risking their lives needlessly just to get stuff and more stuff.

There’s a smugness to all of them, toting guns and believing they can just run around the mall they end up at, about 30 minutes into the movie. Ostensibly they are going to restock themselves there, after evacuating a city in a helicopter. Two of them are cops, two are civilians, one of them is a woman. One of them is black, and so I suppose there’s something of a cross-section of American society circa 1978 depicted by our survivors.

They even sit in a backroom of the mall, eating and camping out, drinking booze. It looks ugly, cramped, cave-like. Note that with a helicopter, they could go wherever they want. Why not to some remote mansion? They criticize the zombies for returning to the mall like idiots who want to shop one last time. But that’s what they do!

Why? Perhaps it’s also to enact the fantasy of knocking off the NPCs or nameless strangers among us. This is one of the gifts offered by FPS’s. Take out all of the people who aren’t people. In a crowd, it feels lonely, thanks to humans we don’t know. The protagonists act out some kind of weird aggression fantasy.

Why all of the quick cutting in this movie? It’s incessant. Not only is it obviously a style choice, it fragments everything, including the protagonists. They look like they bond; they form a little tribe, and enact the us vs. them fantasy now offered by most zombie fare (games included). I think the quick cutting undercuts that bond.

Now that is of course a set-up for the protagonists being separated, attacked individually, a preparation for plot developments ahead. It also means that there’s no unique social or relational bond between these people just because they’re stuck in the same apocalypse together. No firm bond is possible, and they remain, given the cuts, individualists through and through, just as the zombies are individuals walking around and inadvertently forming a horde. (There is no group coordination between the zombies.)

That is a real critique of consumerism, which could destroy the traditional and natural bonds between people, replacing them with a bond between consumer and corporation, consumer and brand, and weirdly enough in this movie, individual and gun.

Because this movie is so well done, I think much better than “Night of the Living Dead,” it’s a cultural myth so pervasive I see about a hundred movies, books, and games in this 42-year-old film.