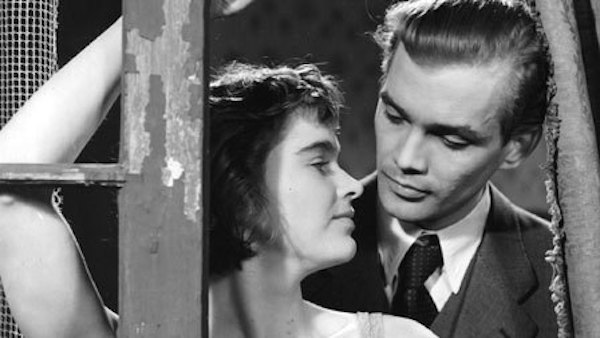 By Josh MatthewsDecember 23, 2020No Comments

Bergman’s “Thirst” could’ve been a masterwork, yet it’s a heap of a mess. Give him credit for trying to create an all-time art object worth the attention of the coming centuries. He’s trying to tackle that persistent problem in human affairs: romantic relationships.

As such, the “thirst” of the title might be a satisfying eros. He covers most ground here: adultery, bad marriages, seduction, and even lesbian relationships. The film focuses for awhile on Ruth, a ballet dancer who inadvertently has an affair with a married man, whom she doesn’t know is married. She’s pregnant, and as a result of an abortion, she’s infertile for life. The movie moves quickly to her later marriage, and she and her husband are train-bound back from Italy to Sweden.

Ruth and her husband struggle, as we all do, and the train I suppose is a metaphor for a bunch of relationship problems. They even bring up the myth of the river Arethusa, which supposedly went underground in Greece and rose back above ground in Sicily, connecting two distant lands. The metaphor is that maybe there’s a secret or hidden connection that could unite the sexes. But maybe not. As Ruth says at one point, summing up a major Bergman theme, there’s no man that hasn’t ruined a woman. The opening of the movie, which has strong Garden-of-Eden symbolism, repeats this: the Eve character (Ruth) is ruined by the crafty already-married man she’s having a fling with.

What do these characters thirst for? Proper love, I guess. The ending strives for that, too forcedly, and ends up being a fraud. Your lover can’t fulfill but that’s all you’ve got, so you might as well believe that your lover can fulfill you. At least Kubrick took on this cynically in his equally errant “Eyes Wide Shut.” All this had been worked out in ancient literature pretty well; I don’t know why moderns forgot it and pretend Augustine or Dante don’t exist. Just go read them.

Probably all of the water in the movie is part of Bergman’s Protestant imagery.” Christ on the cross said “I thirst,” and yet he claimed to be the water of life. Here, the water churns and churns, ending in Ophelia-like catastrophe for one character, giving nothing but at best solace and at worst death. So Bergman knows that romantic love, I think, is not the solution to these characters problems. At least I think he did. I am uncertain why this movie’s ending has to affirm that, except that it’s a mid-20th century movie and that’s a standard kind of ending.

This one’s worth seeing for the Bergman completist. There are great stretches in here that showcase the master’s prowess, plus he’s found some new stylistic flourishes here, so that you can tell he’s improved a lot over previous fare.