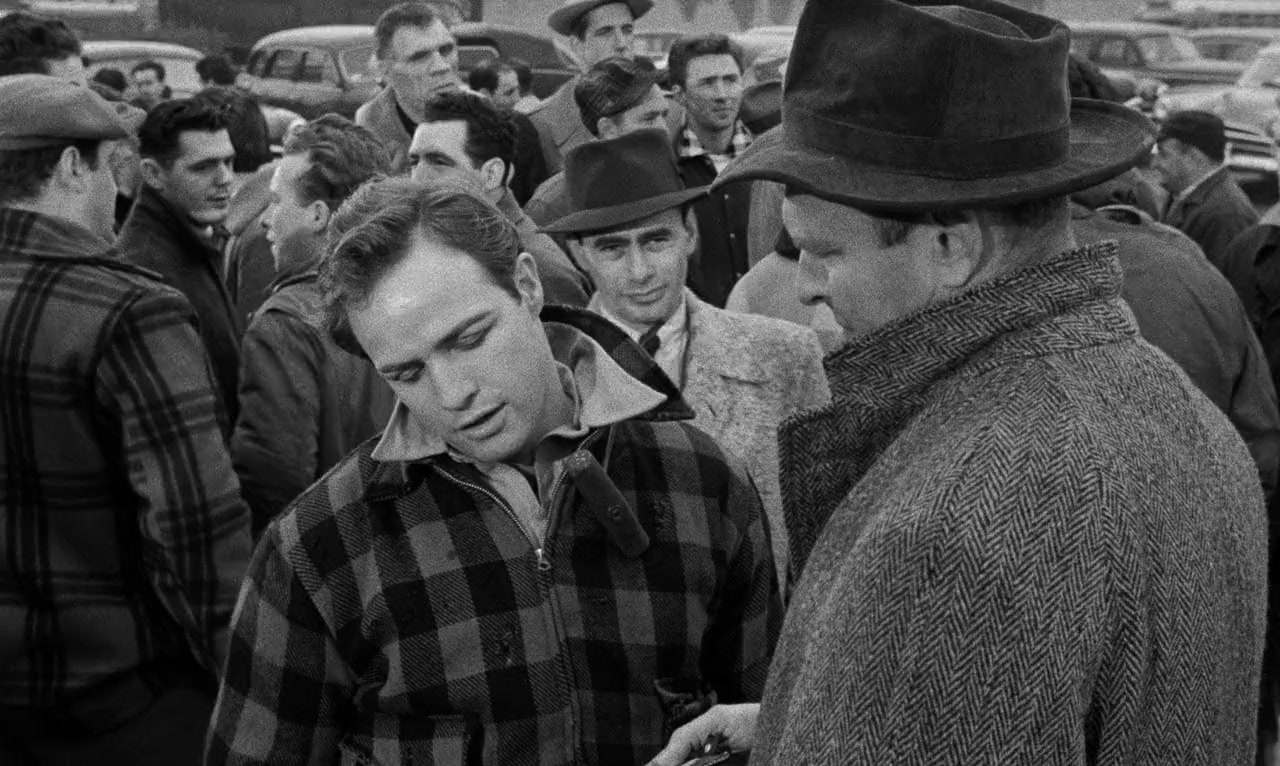 Strong anti-mob, maybe pro-Catholic movie about a dock worker, or longshoreman, who works for the American mob in NYC. The mob controls the longshoremen’s union.

The waterfront’s a spot of high corruption, therefore, yet a passionate priest (Karl Malden) declares boldly, risking his neck, that Jesus Christ rules everywhere because crucifixions can happen everywhere. He begs Terry Malloy (Marlon Brando) to tell who killed a man.

Malloy knows. He’s been a patsy for years, as a former boxer, taking cheap falls for the mob’s gambling operation. Now his brother (Rod Steiger) is second in charge, and Terry runs cover for the mob. He’s supposedly a bit dumb, maybe hit in the head too much, but he knows how pathetic and guilty he is.

Heavy Catholicism here. The whole movie begins with Terry’s fraudulent baiting of a man the mob is going to kill. The man is pushed off a roof, and we watch him fall. Did I say FALL? Yes, and the metaphors will keep coming, as Terry is not only reminded of his original sin but plunged into the mob underworld that demands his submission. Meanwhile, some of his fellow dockers resent the mob. If they fess up to who killed whom, they might be attacked. Does Terry have a conscience? He keeps saying how annoyed he is that he has one.

And oh, the man he lured to his death — well, that man’s sister is out for justice but she also falls in love with Terry, not knowing that Terry is so so guilty.

High drama throughout, in the “low” setting of the dock world of the longshoremen and the lower-class world of Terry. Leonard Bernstein announces his presence with a bombastic score. More noticeable is Brando’s famous method acting. But truly, this movie is as well acted as any Hollywood movie up until this point, including Eva Marie Saint, and of course Malden and Steiger.

Kazan was a visionary–love some of the shots here. Everybody knows the line “I couldda been a contenda!” It’s the context for that line that makes it so good. And this is really a playwright or literary novelist’s script, with symbols galore — the caged pigeons, the fences, the waterfront itself.

All that might be extra annoying, but I love the conflicts in the movie, plus the stuff that this movie is about — can the masses overcome the corruption around them or will they continue to be herded like sheep? can one or two people make any difference? how do you face off against wicked men? These and more — and these are common questions that pretty much all of us have to deal with, regularly.