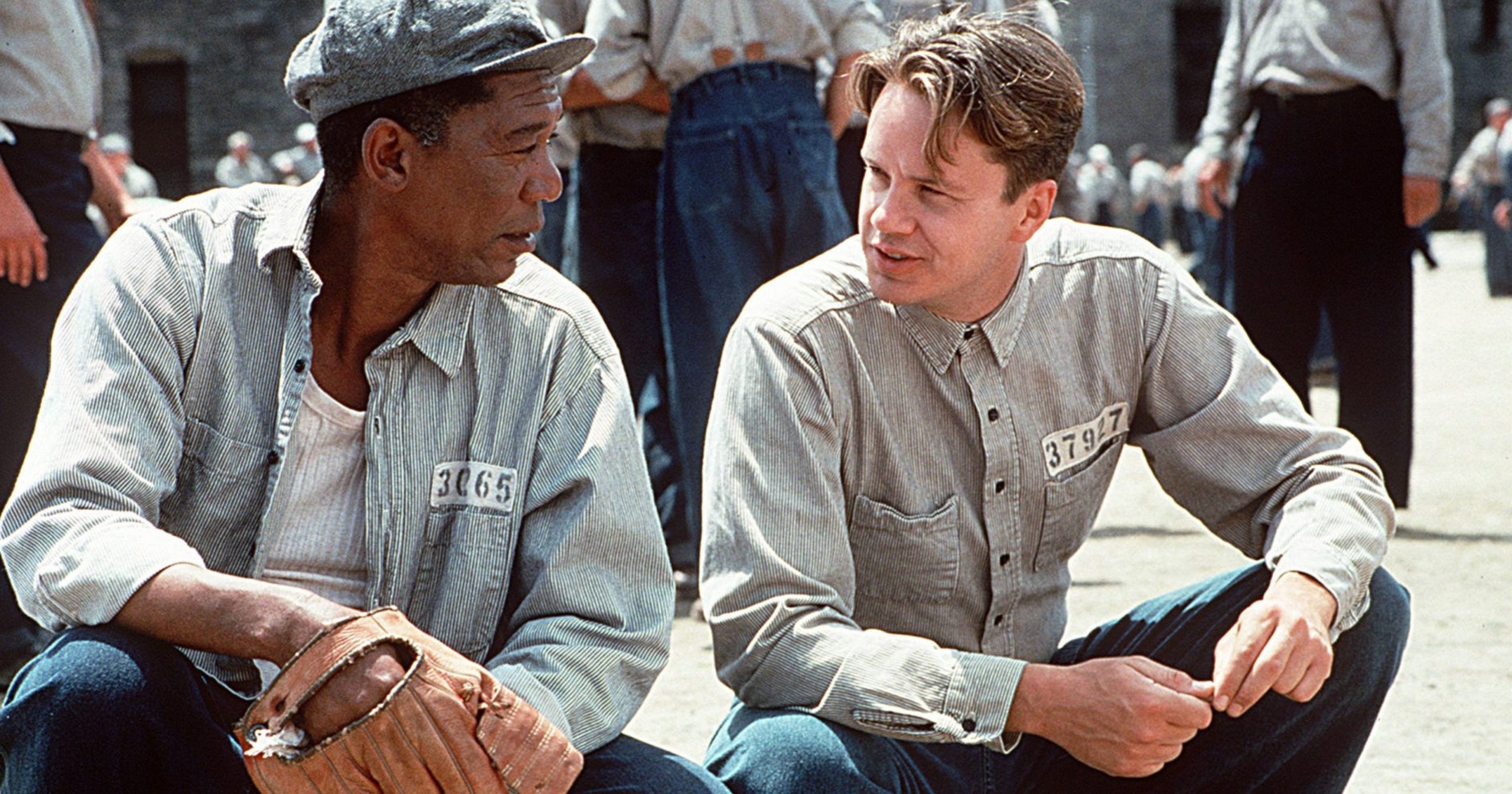 I first watched this movie on my tiny 10″ TV in my bedroom, probably at the age of 15, when the movie came out on VHS. Since then, I have seen it a couple times, but not in the last 25 years.

Since I’ve aged, plus learned a few things about movies since then, and since the movie has remained wildly popular, keeping the #1 spot on IMDB all this time, I figured that I would react against both my youth and popular opinion, as I usually do.

No, the movie affected me today. It’s well made, and despite probably a few flaws, it’s fine with me if it’s the #1 movie ever on IMDB.

About those flaws, Homer nods. I don’t need to get into them too much. Probably there is too much voiceover in places, but then that is the great strength of the movie in other spots, even its great trick. By trick, I mean that the movie could’ve focused on the individual Andy Dufresne, which is seems to do throughout most of it. But really it is setting us up for the ending, because it’s a movie about Red just as much as about Andy, and of course it’s about their friendship.

Most prison break movies — shoot, nearly all of them — focus intensely on the individual. Consider Bresson’s “Man Escaped,” or Hollywood fare such as the various Escape from Alcatraz movies. It’s a simple allegory: from the darkness to light, from the cave to the real world, from brutality to enlightenment, from slavery to freedom. Thus the mass appeal of these movies. “Shawshank” even adds in “salvation,” as if the prison break is a religious freedom, not just a freedom of choice and from the prison system.

While the movie seems to be focusing on Andy, it uses Red’s voice and occasional scene with Andy to hint at the ending, which is really that freedom is about the new friendship on the heavenly beach. This is not a Crusoe fantasy of Andy escaping to his paradisical desert island, which would be a lonely existence. Yet that is what a lot of prison-break movies aim for. I suppose Bresson’s “Man Escaped” actually does not end with just one man getting out, but a duo.

Anyway, see how far I got off-track there by starting with this movie’s flaws? That’s what happens when the flaws don’t matter.

Thomas Newman’s music is as outstanding as any soundtrack and makes the movie. Imagine John Williams here. As great as he would be, it would be overly emotional and melodramatic. Newman’s voice makes this movie sing.

Speaking of singing, I finally noticed that Andy reforms the prison from the inside-out. He’s a literary reformer — not his educational bent throughout the movie. Not only does he train prisoners to get their educations, which syncs with the prison-break theme of getting out of the Platonic cave. He also encourages art, a form of freedom and free-thinking in the movie. His prison cell, for example, is plastered with art. He sculpts. He turns on the Mozart opera record for the prison. He reforms the library, adding lots of literature. He’s even attending the movies, and slams Boggs’ head with a movie-reel, resisting punishment by assaulting others with Art. Not to be outdone, he’s a numbers guy, too — so add Math and accounting and business to his polymath reforming of the prison.

I think this is what does in the hypocritical warden and the rottenness of that entire prison. They can’t stop, in fact they enjoy using, Andy’s love of learning. He says that at one point, of course, that it’s on the inside, but that’s not true, since Andy uses whatever is in there to alter what’s out there.