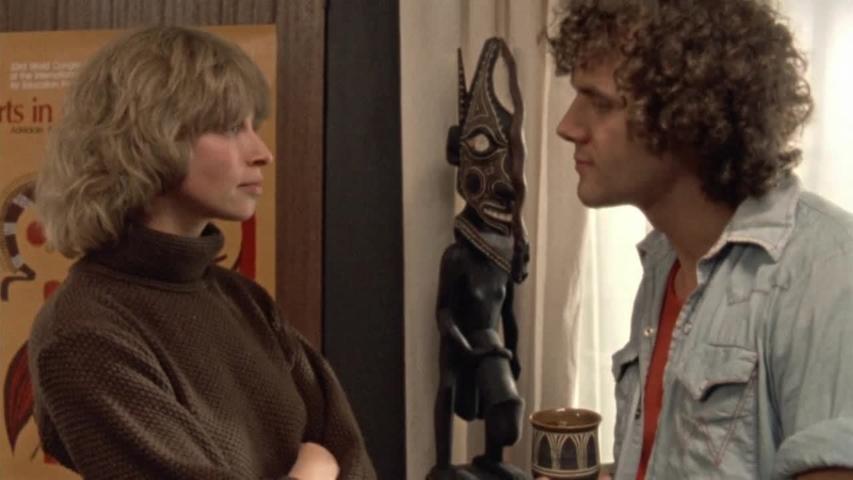 Jill and Brian Cowper live in university housing, both intellectuals who love cultural diversity and global culture. They love it so much that there’s a “cultural diversity” poster on their bathroom door, and Jill seems to enjoy listening to native chants in her free time. Brian’s a medical researcher whose work has brought him into extensive contact with New Guinea tribes.

One day a plumber shows up to their door. He claims the pipes in their bathroom are broken. Jill lets him in.

This begins a Hitchcockian storyline, in a movie with serious class issues to raise. The plumber seems to take forever with his work. He’s too chatty. Of course he’s the apartment’s hired plumber, so what can Jill and Brian do but wait him out?

The plumber annoys Jill, and that’s partly, or maybe completely, because of his social class. The plumber listens to rock music, wears a leather jacket, and has presumably little education. Jill and Brian are more at home with medical researchers from Africa and India than they are with their neighborhood Australian.

Now if you’ve ever owned a home and had a construction project, this movie will mess with you. Such projects can be nightmares in which it feels as if your living space is invaded by workers. At that basic level, this movie makes a lot of sense.

Now is the plumber “psychotic”, as descriptions of this movie claim? Maybe so, in which case the intellectual class is being tormented by the working-class. But there’s a strong case to be made that a lot of this movie is from Jill’s point of view, and that what we see of the plumber is her own distortions. Maybe he’s not as awful as she thinks — yes, he is lazy and chatty and takes far too long on his job — but maybe his annoyances are converted into monstrosities by Jill’s own imagination.

In that way, the movie watches two ways — where the plumber is the problem or Jill and Brian are. If the latter, the movie is a strong dig at upper class Australians who have no fellow feeling and no care for their fellow working class citizens. And that would make this 1979 movie far ahead of this time, as (in my estimation) we have the same kind of class divide between college-educated whites and non-educated whites in the U.S. right now.

I thought all of this was obvious from the beginning, but the ending is a bit surprising.

It’s nice to find this Peter Weir movie, initially made for television (and go ahead and spot the commercial breaks here). “The Plumber” comes between Weir’s “The Last Wave” and “Gallipoli”, two quite-good movies. It deserves a bit more notice, especially because of its ongoing relevance.