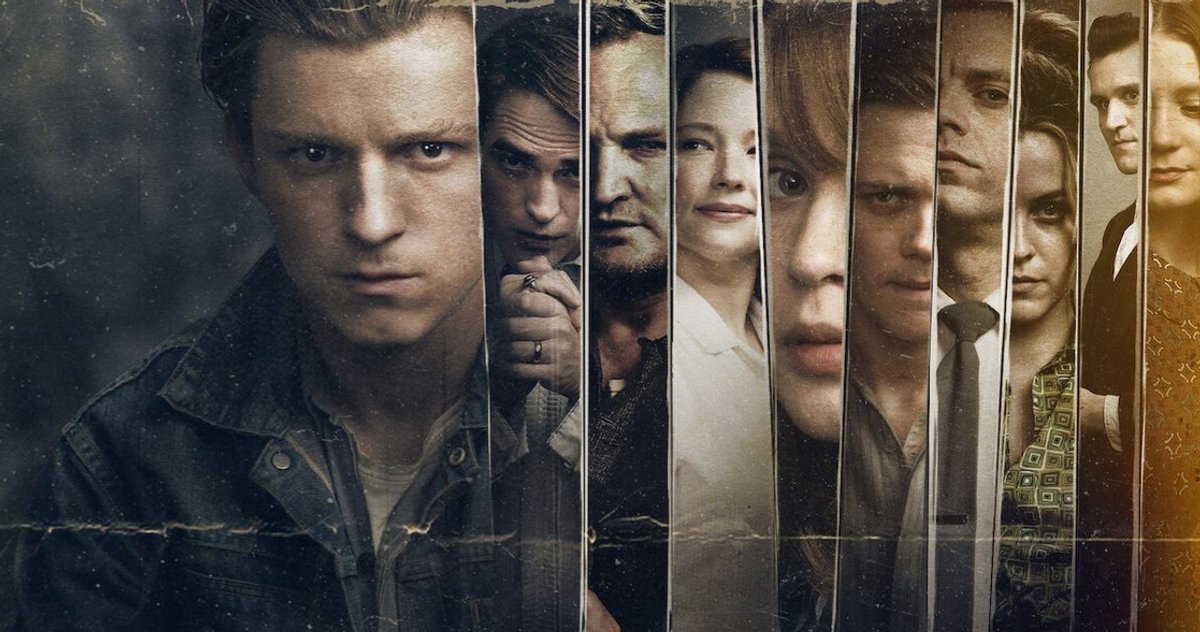 The Devil All the Time

Has the joke been made yet that this title is Netflix’s official slogan?

The movie doesn’t have anything to do with the devil, except that it’s set in Bible-Belt Appalachia from 1948 to 1965. An ex-soldier returns home but can’t avoid his PTSD or inner demons, and while he teaches his son to pray at a makeshift backwoods retreat, complete with a huge crucifix, he’s also violently seeking retribution on any nasty townsperson who says horrible things about his wife.

His son is getting beat up in school, so to teach his son a truth about reality, namely that you have to show power and fight back, he attacks two men in front of his son. They are “nasty sons of bitches” that overrun the world. The son says that this was the best day he had with his father.

The movie, after about 50 minutes, shifts focus to the 1960s, after taking place in the 1940s, and we see the son (Tom Holland) all grown up. The one constant in the movie is his grandparents, steady and weary and enduring every terrible tragedy that takes place in this bleak movie.

Nothing more can be spoiled, except to say that this movie isn’t just about the father and the son. They might be the main characters, but there are a dozen more, all of whom the movie focuses on. With time shifts, a heavy dose of voiceover narrator, focus shifts between characters, and a sprawling plot, the movie feels like a novel.

That’s not necessarily bad or wrong, but I think the screenwriters were too much in love with the novel this movie is based on. They needed to cut about 20 minutes from a movie that seriously drags in the last hour, when we know what confrontations must happen but we have to wait too long for them.

This movie argues that post-WW2 America was f—ed up, that that war messed up so many people that it caused a lot of social problems. The span from WW2 to Vietnam is apt, since the son is of age to enter the Vietnam War. Will he commit the same sins as his father? This is a major question, as both sons and daughters seem to repeat what their fathers and mothers do.

The son in this movie wants to pray, and he wants answered prayers, but looking at all those fake preachers and at his father, whose PTSD drove him to madness, is the movie saying “no” to the question of whether God answers prayers?

The compositions, sound design, and instrumentation of the score are excellent. Cinematography Lol Crawley should have a long career based on his work in this movie alone. That’s enough to cautiously recommend this movie to some people.

Yet it needs a script rewrite, one more, or a heavy editing job. I don’t demand coherence in sprawling plots with a dozen characters, but I do demand moving the plot forward always, and this movie unfortunately spins its wheels at about the 75-minute mark, when I kept looking at my clock repeatedly.