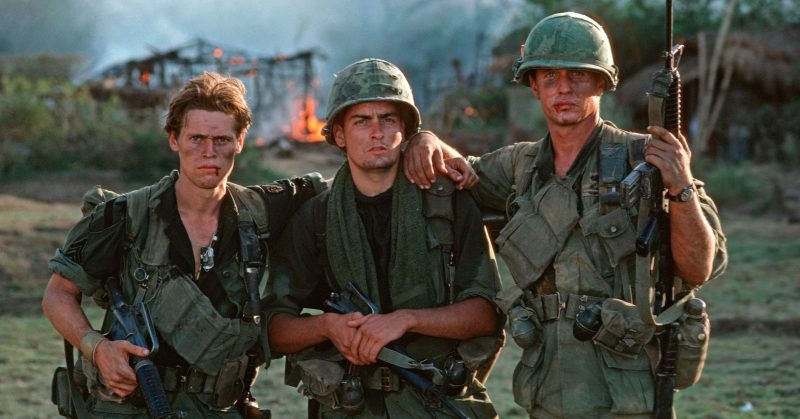 “Platoon” works best considered as a cinematic memoir about director Oliver Stone’s service time in the American Vietnam War. It’s misidentified as an anti-war movie, and, unlike most other Stone fare, it’s not especially about abstract politics or some vast sweep of history. It’s about a grunt’s experiences in the Vietnam jungle.

Stone announces that this is a Rashomon memoir throughout, but especially early on when, after the Sheen character first steps off the copter and into base camp, you see a shot of filtered sunlight through the jungle canopy, camera pointed straight up. We’re in the Rashomon forest of darkness that is ambiguity and lack of truth. This motif continues throughout with slow camera pans through dark jungles, refracting what it must have felt like for Stone and others to uncertainly patrol the Vietnamese jungle.

The movie pits two characters against each other, though not obviously until the shocking moment about 75 minutes in. These two characters, the Dafoe and Berenger ones, are representative of two movements — hippies and macho-men, or more broadly, idealism and realism. The movie overtly states that. And then in the final voiceover, the Sheen character says that he was birthed by the two of them. That’s fascinating because Stone’s idealism about American politics is a core feature of almost all of his movies, so often in tension with “what is” or what actually happened. (E.g., the movie “JFK” wishes that JFK were alive to stop the Vietnam War and wants the truth about the assassination to be known, even though that is not realistic, according to the movie as well.)

Thus “Platoon” is not just about individuals and memories but also those grand old ideas of idealism and realism, what we think ought to be and what is. You could accuse the movie of being reductive about that, but the final moment (SPOILER) where the Sheen character kills Berenger is definitely not, as Pauline Kael put it, a justified revenge fantasy. The Sheen character has become what he despised; he becomes the realist and the murderer of a fellow soldier. Yes, you could say he’s killed off the war-realists of the 1960s who advocated escalating the war, and yet he’s not praised for this at all — you can take that ending however you wish. Sorry Pauline, you miswatched it, including when you said that Dafoe-Berenger represent “good vs. evil.” It’s not that simple.

If I construe this movie as a memoir, then I can easily justify the nostalgia, romanticism, and hyper-emotionalism that usually shades Platoon’s great scenes and great shots. In most war movies, such as Saving Private Ryan, I believe those tones are unjustified and even harmful. Yet here, I think Stone is sincere in trying to honor the various visions of his fellow veterans. That’s an obvious excuse for the romanticization, but the war scenes are a key part of Stone’s memories, and thus he’s at once abhorred by them and in love with them. So many scenes depict abhorration and nostaligia at the same time. We must never focus on just one and thereby misinterpret or reduce this movie.

I’ve known many Vietnam vets who simply won’t talk about their experiences at all. Why not? “Platoon” shows us what they might feel like, perhaps. For that reason alone, it’s a great artistic record of what it’s about.