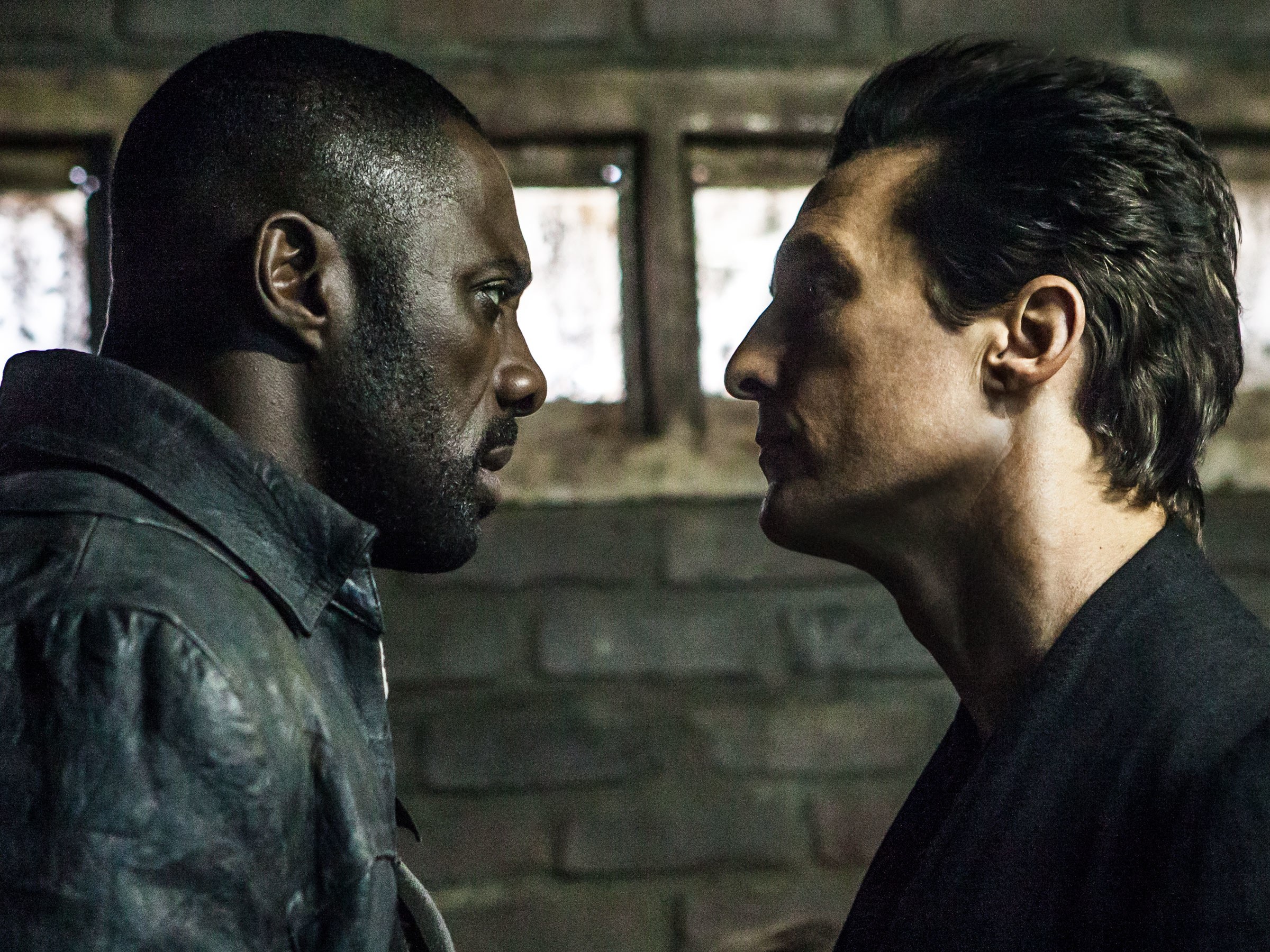 In a just world, consumers would receive refunds for The Dark Tower. The movie deserves long lines of protestors standing outside every movie theater that shows it, picketing and demonstrating against Sony Pictures’ attempt to rip off them off.

It’s also an imagination-killing work, and I mean work, as in I physically restrained myself, during almost every second of this insufferable movie, from starting the protest line at my own theater. Instead, I somehow endured The Dark Tower’s every painful cliché, its every nonsensical word, its every anemic image. If Sony can recall its own products and offer refunds for them, why can’t it offer money back for its lame movies?

Based on multiple Stephen King novels, The Dark Tower imagines that all hell will break loose into the universe unless a kid named Jake stops it. Jake (Tom Taylor) dreams of a nightmare fantasy world, then awakes and draws pictures of his dreams. Although his mother and stepfather think that he’s mentally ill, they do not understand that he is a Male Fantasy Protagonist: troubled and bullied, but also gifted, artistic, lucky, shy, psychic, and single.

It turns out that Jake, and no one else in the world, understands that the source of the Earth’s many earthquakes is the imminent threat to a dark tower in the center of the universe. That threat is the Man in Black (Matthew McConaughey), who wants to destroy the dark tower to usher in “the demons and darkness” that lurk just outside the known universe, waiting to get in and probably kill us all.

On a planet called Mid-World, the Man in Black corrals kids from Earth and harnesses their powers by torturing them. This somehow allows him to shoot bolts of energy at the dark tower. Although he cannot quite topple the tower with this method, his sorcery has no limits. As the movie progresses he’s able to do anything that the plot might need him to do. That includes portalling back and forth between Mid-World and Earth, catching bullets with his fingers, killing people with just a word, and employing vast numbers of minions, some of whom look like computer programmers in flannel shirts.

The only thing stopping him, besides Jake, is The Gunslinger (Idris Elba), whose guns were forged from the same metal as Excalibur. Jake travels from Earth to Mid-World, then tries to talk the Gunslinger, a loner who has given up fighting, into stopping the Man in Black.

Already you might be confused, as I was, about the genre of this movie. It’s best described as an apocalyptic coming-of-age teen-angst science-fiction fantasy horror Western. As an example of its genre-mixing curiosities, The Dark Tower depicts portals that require advanced computers to open them, but then it also features copious amounts of black magic and demon possession. The Man in Black can talk to anybody anywhere by using his black crystal ball, but he needs his computer programmers in flannel shirts to run his portal network. (I suppose this means that, despite the seeming menace of Men in Black, the universe is actually run by nerds.)

The movie creates new fantasy rules for itself every three minutes. As we watch, we learn that this movie has no consistent rules and that the moviemakers unfairly make things up as they go. When Jake needs to survive an attack from a demon-possessed wood floor, he manifests his special psychic gift, “the Shine.” When Jake is captured by an evil minion, for the first and only time in the movie the Gunslinger uses his super-sensitive hearing to shoot down the minion.

And, confoundingly, what else can kill the most powerful sorcerer in the universe except a .45-caliber six-shooter?

As well, we never see the promised demons lurking just outside the universe. We also almost never see the dark tower, except in a few quick shots. Who runs it? Why is it there? Even though the characters in this movie spend most of their lines explaining everything, boring us to the point of protest, they never answer key questions about the all-important thing they are supposed to be protecting.

The Dark Tower destroys, through its reductive vision, creative possibilities for good fantasy storytelling. It tempted me to cheer on the Man in Black and his nerds in their quest to destroy the universe. It tempted me to consider whether nothing is preferable to something. In the end, this movie’s only serious philosophical question is whether we are better off with no universe or a universe that contains a Dark Tower movie. That is a sad conundrum, a no-win situation, thanks to Sony.

Since protesting the movie won’t do much practical good, I request a refund. If Sony won’t give a refund, then I will derive satisfaction if this review keeps just one person from paying in any way to see this movie.

Next year the Razzies are coming, and The Dark Tower should receive a heap of nominations. It will deserve every Razzie that it gets, which will satisfy, as this movie did not, my longing for the triumph of justice and the good.