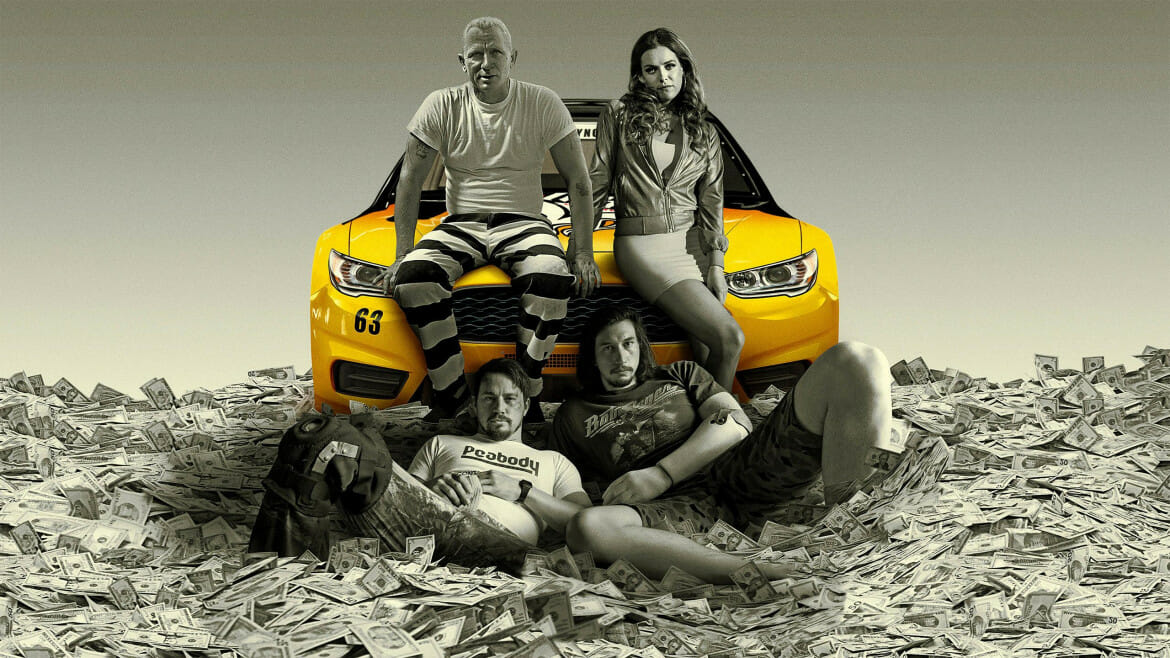 For two hours, “Logan Lucky” offers many fine ,jazz-like riffs on the familiar melodies of the heist-movie plot. Its reworkings of those melodies bring new delights to the tired notes of heist films, including “Ocean’s 11” and its two sequels.

It also reminds us, while altering those melodies, how much we like those worn-out old plots.

Here’s one of those riffs. The money to be stolen is in a vault somewhere under Charlotte Motor Speedway. A system of pipes feeds the vault its money, which comes from cashiers who deposit their customers’ cash into the pipe-system at the Speedway. To get the money, the movie’s thieves need several key elements. Two of those—familiar notes in all heist movies—are a fast car and a good-looking woman. But, three others are wild variations: 1) color-coated cockroaches, 2) a bomb made out of gummi bears and imitation salt, and 3) a fake riot at a cafeteria in a West Virginia prison.

These variations sound bizarre, and they are, but the movie’s careful pace lessens the impact of its bizarre elements. “Logan Lucky” proceeds with caution and requires patience and attention; it even points out this requirement by subtly joking about the impatience of cellphone users.

If “Logan Lucky” is like an excellent jazz album, it is one that must be concentrated on, thought about, and re-watched.

They at first seem too dumb to pull off an easy robbery, let alone a Rube-Goldberg-esque scheme. But, slowly we realize that the brothers, along with their sister Mellie (Riley Keough), are simple only in appearance and slow only in speech.

The story starts with Johnny, who loses his tunneling job underneath the Speedway because of his game leg. Divorced and unsuccessful, Johnny loves John Denver tunes and his young daughter, whose mother (Katie Holmes) has re-married a very wealthy car dealer. That’s enough reason for Johnny to partner in a heist with his brother Clyde, an Iraq-War veteran and a one-armed bartender with a bulky prosthetic arm.

Because of Johnny’s experience tunneling under the Speedway—he’s seen the pipes that people call a “cash highway,” and he’s heard about the accessible vault—Johnny and Clyde plan their heist, complete with a list on Johnny’s refrigerator that rehashes every plot element of almost every heist movie. One of those, actually repeated twice on the list, is that “shit happens.” (It does so in bizarre and delightful ways.)

Not having acted criminally since Clyde went to “juvy,” the brothers require help. Their man is Joe Bang, who is played by Daniel Craig, in a role that he has great fun with. Since Bang is serving time in prison, the brothers have to break him out. This requires, hilariously, the need for Clyde to get arrested and sentenced to prison, which means that Clyde will have to break out, too.

I mentioned “Ocean’s 11” earlier because “Logan Lucky” is written and directed by Steven Soderbergh, who directed the Ocean’s movies. Soderbergh retired from filmmaking in 2013, but he has unretired in the same way that Michael Jordan did: in other words, he’s back and perhaps better than ever. “Logan Lucky” references, in sly ways, Soderbergh’s retirement and “Ocean’s 11,” via a yoga-obsessed NASCAR driver and a TV newscast that refers to the Logan Brothers’ heist as “Ocean’s 7-11.”

But “Logan Lucky” is far more than a winking tribute to Soderbergh’s older movies and the heist genre itself. The movie demonstrates deep affection for red-state America, West Virginia, and Boone County. The movie’s sets encapsulate small-town America: the Duck Tape bar (where Clyde works), a Quick Stop gas station, a Lowe’s hardware store, a mobile medical clinic, a body shop, and a hair salon. The NASCAR race looks bright and cheerful. Shockingly for a Hollywood film, the movie does not mock hillbillies or West Virginia. It seems to love them, and it makes us root for them.

This love is scrutinized by the movie’s multi-layered statements about America: a land of admirable git-r-dun types, gaudiness, and lies galore; a place that produced good-old-boy rebels such as Daniel Boone (the namesake of Boone County) and George Washington. As one of the characters points out, to rob a NASCAR race is kind of like robbing America, because “NASCAR is America!”

While this patriotic sentiment seems appealing, “Logan Lucky” recognizes that American patriotism—in the form of God, country, and NASCAR—also involves glitzy spectacle and corporate marketing. Several of Soderbergh’s shots, including a nice one of a Nationwide decal on a racecar and another one of a hand with glittering press-on nails holding a stick shift, amplify this point.

The Logan brothers, although we do care for them, are would-be American thieves. This is a point that “Ocean’s 11,” a movie that celebrates a multi-million dollar robbery, never makes. It may be the key oversight of most heist movies. When we side with the thieves in such a movie, aren’t we thereby rooting for their theft? For all theft? “Logan Lucky,” as its last twenty minutes demonstrates, understands the troubling ethical problems of its genre.

Its ending is perhaps the movie’s greatest riff on familiar heist-movie melodies. If it’s watched closely, “Logan Lucky” offers a fun and thought-provoking aesthetic experience. It is a movie that both exists in, and is transcendent of, its genre.