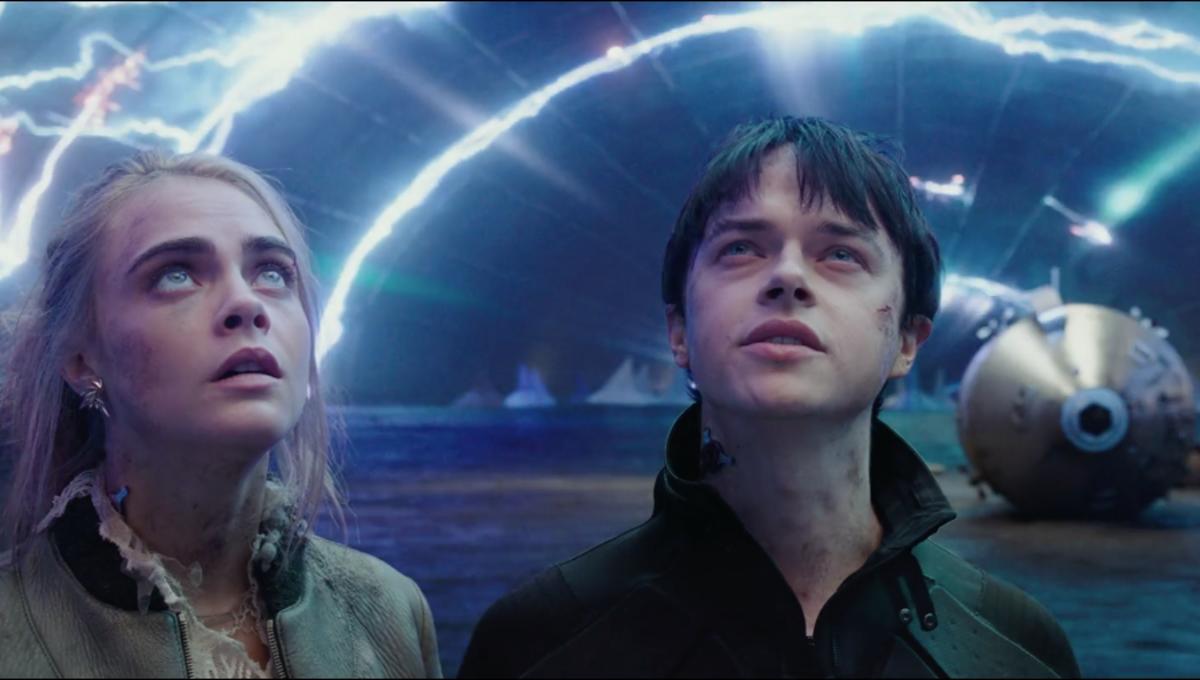 Valerian and the City of a Thousand Planets (2017)

Midway through Valerian and the City of a Thousand Planets, I thought we were witnessing one of the greatest visual experiences in movie history. The city of the title is a gigantic space station like no other conceived. There is a bustling street-market scene of science-fiction wonder that should make George Lucas, the grandfather of this movie, exceptionally proud.

Alas, the last act craps out. The movie gets sucked into the gravitational pull of the resolution of its Avatar-esque plot. It even has a countdown clock that shows up again and again, which eventually stops with—yes, you guessed it—one second left.

Too bad. Because most of Valerian represents a leap forward in representations of the far-future and the vast marvels of the universe.  It is written and directed by Luc Besson, who also did the same for The Fifth Element (1997). That movie, like Valerian, is two-thirds inventiveness and one-third cheese. Besson’s tastes and flaws are all present in Valerian: wacky costumes, a lot of weird aliens, a hundred different locales, and an obsessive focus on the MacGuffin.

The MacGuffin here is a “converter,” a cute alien pet who can take one pearl and turn it into hundreds of pearls. This converter, desired by alien mob bosses, is the last of its kind. Federal agents Valerian and Laureline (Dane DeHaan and Clara Delevingne) must find and acquire the converter for their government organization, the United Human Federation.

Valerian and Laureline find themselves, as movie federal agents so often do, in a tangled mess of intrigue. The Federation has top-secret reasons for acquiring the converter. As well, alien terrorists attack the Federation because they want the converter.  These aliens are in fact not terrorists but instead the rightful owners of the converter. They are survivors from the Planet Mul, a primitive ocean paradise that was destroyed when warships attacked by the Federation crashed into the planet.

Most of this, I confess, was beyond me. The real reason to watch Valerian is to look around at it. Early on, Valerian and Laureline enter a multi-dimensional tourist city, half of which takes place in an open desert and the other half in a virtual-reality city market. As it switches back and forth between desert and market, this long scene one-ups all of its predecessors, which include the Star Wars movies, the Star Trek movies, the Hellboy movies, and Avatar. It may be the standard for all virtual-reality scenes in the future.

The delights keep rolling for a while. Valerian and Laureline proceed to Alpha, the free-floating space station that houses people from a thousand planets. Alpha is the most original spaceship since Dark City, but calling it just a spaceship is an artistic injustice. It is so vast and diverse that it could be the setting for a thousand unique movies.

Valerian spends limited time at Alpha. Valerian and Laureline go everywhere possible. An underwater submarine adventure, in which Laureline must steal an alien jellyfish from a massive dinosaur creature, segues into Laureline putting the jellyfish on her head to acquire its memories. Later, Valerian strolls down Paradise Alley, a street with some of most bizarrely-clothed prostitutes in movie history. Paradise Alley ends with a wild appearance from Ethan Hawke, who is the pimp of blue shape-shifting aliens. Valerian, thanks to Hawke and an alien named Bubble, witnesses one of the most creative exotic dances you will ever see.

All of this occurs while Valerian and Laureline try to negotiate their love life. He proposes to her early in the movie, she rebuffs him, but together they can save the Federation and finally realize that the universe is all about the two of them in love, and not about movie MacGuffins.

In the popular imagination, Valerian’s current claim to fame is that it is the most expensive independent movie ever made. At least that is what news outlets have been reporting.  The truth here is that “independent” means that it was not made by one of the major six Hollywood studios. Instead, much of the funding for Valerian was provided by the Europa Corporation, which has helped release numerous movies over the last fifteen years. These include Taken and the Transporter series, this year’s thoughtful The Circle, and Tommy Lee Jones’ masterpiece The Three Burials of Melquiades Estrada. If Europa Corp. can keep providing new, alternative visions to standard Hollywood fare, our cinematic experiences will be enhanced.

My fair warning is that I saw Valerian on a Cinemark XD screen, which is as crisp as a huge digital screen can get. You should not try to watch Valerian on anything but a larger screen. Do not be tempted to see it on a tablet or a back-of-the-seat airplane screen; otherwise, the ho-hum plot will dominate. Valerian’s colors must be richly displayed. Its side and corners have to be large enough to be studied. This is one of the best-looking movies of the decade.