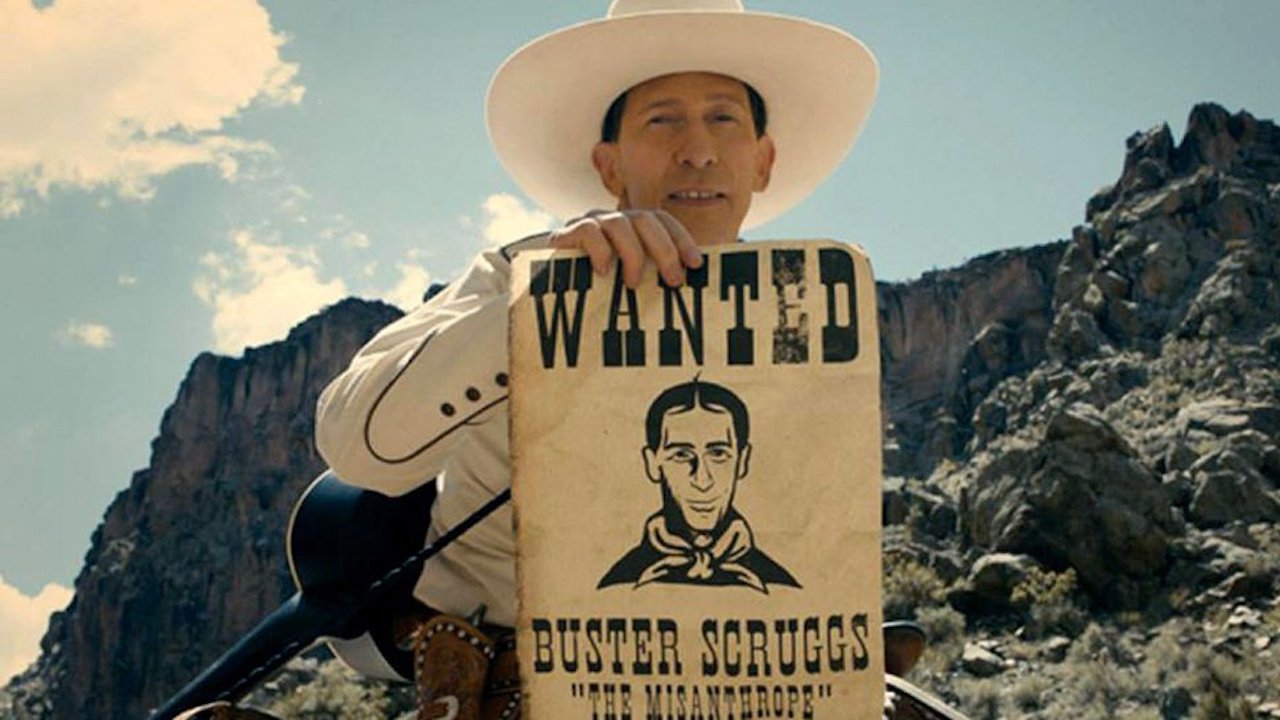 I have been waiting long, so long, for someone to do it well. The Coen Brothers have nailed it. They have created one of the best anthology films ever made.

For at least a moment, they have resurrected an underused film structure with amazing potential. And here, they have used it to create a work of emotionally wide-ranging wonder.

The Ballad of Buster Scruggs, streaming on Netflix, is a Western anthology film composed of six stories or short films. Released in 2018, it is one of the best films of 2018.

This is a film with many layers. The short films are held together by a visual conceit: the viewer is, in a sense, reading a faux-book of short stories said to be published in the 1870s. On-screen, as each short film begins and ends, the Coens feature the book. As each of the short films ends, the text of the book dissolves on to it.

Already, as you can see, this is a complex work with more creative fodder than any critic can handle at once, with six stories that interconnect in dozens of ways.

Yet Buster Scruggs should be a breeze to watch for any mature viewer.

All of the six stories have their relative strengths. They complement each other beautifully. And they are all Westerns of a kind, riffing on old ideas, combining to create something new.

The opening eponymous story, “The Ballad of Buster Scruggs” offers singalongs and showdowns, as a white-clad cowboy, Buster Scruggs himself (Tim Blake Nelson), proves how tough and smiley a movie cowboy can be. Meanwhile, the second story that follows, “Near Algodones” (starring James Franco and Stephen Root), features hangings, Indians, cattle-thieves, and a robbery of a bank that is in the middle of nowhere.

Oh but there are more Western movie tropes, many more, as the Coens go through as many of them as possible. You will see Oregon Trail drives, stagecoaches, prospecting, mining towns, Indian raids, traveling entertainers, deserts and big skies, and plenty of guns and corpses.

As for which of these stories is the best, take your pick. On lighter days, I suggest the prospector’s story featuring Tom Waits, “All Gold Canyon,” part Disney-movie-parody and part triumph-of-the-individual-will. On black-cloud days, the brutal “Meal Ticket” (Liam Neeson) will seem the most cynical parable ever told about the entertainment industry.

Ultimately I settle on “The Gal Who Got Rattled” and “Mortal Remains,” the last two stories in the movie. The acting in “Gal” (Zoe Kazan and Bill Heck) is so spot-on that its ending is as poignant as any 2018 movie. The chatty, macabre “Mortal” invites listening to the banter of five very different travelers on a stagecoach. Brendan Gleeson’s character’s rendition of “The Streets of Laredo,” based on the Irish tune “The Unfortunate Lad,” sums up, and is worth the price of, the entire movie.

The six stories feature recurring ideas, among them, the young or new generation replacing the old. In most of the stories, there is a prominently featured bullet-hole in a head, usually right after someone has been shot. And then, on full display, are myriad ways to interpret and approach death itself, often figured by the Coen Brothers’ favored image of a black silhouetted figure against a horizon, which appears in various ways over a dozen times.

The stories might be arguing with each other, or they might be presented in a kind of order. The light-hearted “Ballad of Buster Scruggs” begins the movie by combining Gene Autry and Quentin Tarantino into a very goofy, flippant take on violence and death. Yet “The Gal Who Got Rattled” is so affecting that death in it seems harsh, pointless, too much to take. Is one story criticizing the other’s view of death?

I prefer to see this movie as offering an order; in other words, the sequence of the six stories matters. The stories seem to move, one to the next, from juvenility to wisdom. A youngster might view art and death in the flippant way that the first story, “The Ballad of Buster Scruggs,” offers. But an older person might see death as the final story does, “The Mortal Remains”: close yet unknowable, gloomy, uncertain, scary. All told, it is an order that spans the tonal qualities that the Coens’ entire oeuvre offers: from violent, nihilistic, and ridiculous; to somber, poignant, and existentially powerful.

If The Ballad of Buster Scruggs offers that kind of order, then the Coens showcase a strong fear of death. This might lead some viewers to despair, but in a culture that largely ignores the inevitable, the Coens are telling us to overlook petty ideologies and ephemeral concerns to focus on the unavoidable truth of life—that you, and everyone else you know, will die.

With this movie, the Coens stare at all of us and say: “You will die. Have you ever really considered that? What could be more crucial to think hard about than the fact that you are going to die? Now, at the end of this movie, what does that mean to you?”

But the grim fact of our deaths need not be the sole focus. The Coens have resurrected something: the anthology film. And they developed it beyond what it has been previously capable of. The Ballad of Buster Scruggs creation and release offer us great hope in that what has died, artistically or otherwise, will live again—stronger and more wondrous than ever.