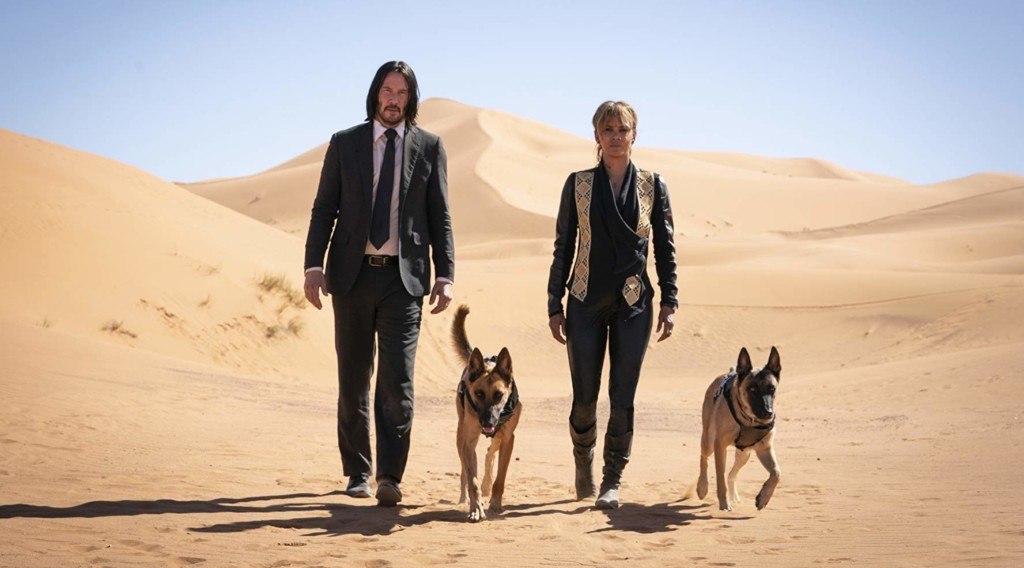 John Wick 3 is barbarian ballet. Only a nation at war for nearly twenty years, such as the United States has been, could produce something like it—an exquisitely choreographed film that tries to wrest beauty out of the infinite variety of ways that combatants, at point-blank range, can be shot in the head.

This John Wick movie, the third “chapter” in a series that could go on indefinitely, is no different texture-wise than its predecessors. Whatever you thought of John Wick 1 or John Wick 2, you will probably think the same of this movie.

Relating its plot to you is close to pointless, since the entire series is mostly about its atmosphere and action scenes. To briefly summarize, this movie picks up from the ending of John Wick 2, where John Wick (Keanu Reeves) finds himself declared “excommunicado” in New York City. This means he has a price of $14 million dollars on his head. Because he has violated “The Rules” of a never-seen ruling counsel known as “The Table,” he finds himself hunted by every assassin in New York.

If you didn’t already know, that would be nearly everybody. In the John Wick movie series, there is no functioning society. Its fictional world is populated entirely by assassins, and people who work for them. They all pay each other exclusively in gold coins. They also use, at times, old technology such as rotary phones and typewriters—even at classy high-tech hotels like the one preferred by Wick himself, The Continental.

Early on, Wick is running while being hunted by a cast of hundreds. He tries to seek refuge with old friends, including a Belarusian theater director (Angelica Huston) and a former assassin-friend who has left the business (Halle Berry). Eventually, Wick must seek solace from The Elder of the High Table, who acts something like Prince Feisal in Lawrence of Arabia, only more assassin-like.

The John Wick movies appeal to something so basic in certain people—I speak only for myself and a few others I have met—that they can’t help but be successes: the hypnotic appeal of combat with an unbreakable honor code. Wick himself is, foremost, a great fighter, and his world is one of rules, other rules, and still more rules. Break those rules, and you have violated a near-sacred oath, which requires justice to be served—seen when John Wick is legally hunted for his transgressions.

The Wick movies center around allegiances that recall ancient and medieval ideas about duty. Characters strive hard to swear “fealty”—a word used a lot in John Wick 3—to other characters. They bear insignias and wear brands that give them “safe passage.” They seek “parley” when a combat stalemate occurs. Topping all of this is the character of the “Adjudicator” (Asia Kate Dillon), perfectly cast as the enforcer of a system of rules that all of the characters not only know by heart, but hold as sacred and inviolable.

For example, at one point Wick, chased by an assassin, crashes onto the steps of the Continental Hotel. He puts his hand on the bottom step of the hotel’s outdoor staircase. The assassin who approaches Wick to kill him instead backs off. That’s because the hotel is, according to the rules of this assassin-world, off-limits for “business transactions.” If the assassin were to kill Wick, he would violate the rules. With his hand on the step of the hotel, as if he’s playing a playground game, Wick is safe.

John Wick 3, as its predecessors are, is also a self-conscious exercise in honoring several cinematic traditions that go way, way back. One of the first shots of this movie shows a videoscreen in Times Square with an image of Buster Keaton, one of the greatest of all silent-movie stuntmen. Later, John Wick travels to the city with probably the most provocative filmic association of all: Casablanca.  Lawrence of Arabia is invoked, as is the name of Andrei Tarkovsky, the great Russian director.

Not only that, but there is literal ballet in the movie, recalling great ballet movies such as Michael Powell’s The Red Shoes. Between that and the image of Buster Keaton, John Wick 3 is trying, I think, to tell you how to watch it. Look, it says, at the styles, the rhythmic and rugged movements, the amazing stunt coordination, the camera moving with the fighters up and down and through barriers. This is a movie of many astonishing physical performances and cinematic shots.

If you watch the movie only for its aesthetic, you will be left wondering how they did it. How did they get those attack dogs to perfectly perform those stunts? How did they coordinate fighting while riding motorcycles? How did Keanu Reeves pull off over an hour’s worth of fight sequences that look completely exhausting?

John Wick 3’s reliance on hyper-violence is why I called this movie “barbarian.” I don’t know what highly civilized society could find the hundreds of simulated deaths in this movie artistically appealing. Certainly, this movie celebrates guns and their uses to great extremes that few movies have gone to before.

As proof, an audience member in my theater showing became ecstatic when John Wick armed himself for a major battle against hundreds of armored soldiers. As Wick picked out ammunition described in the movie as “12-gauge armor-piercing shells”—a kind of ammo that does not yet exist—that audience member shouted at the screen, “&#!$ yeah!”

As a response to everything celebrated by this movie, and the time and place in which it is released, his less-than-civilized reaction is just about the best summary of all of the John Wick films combined.