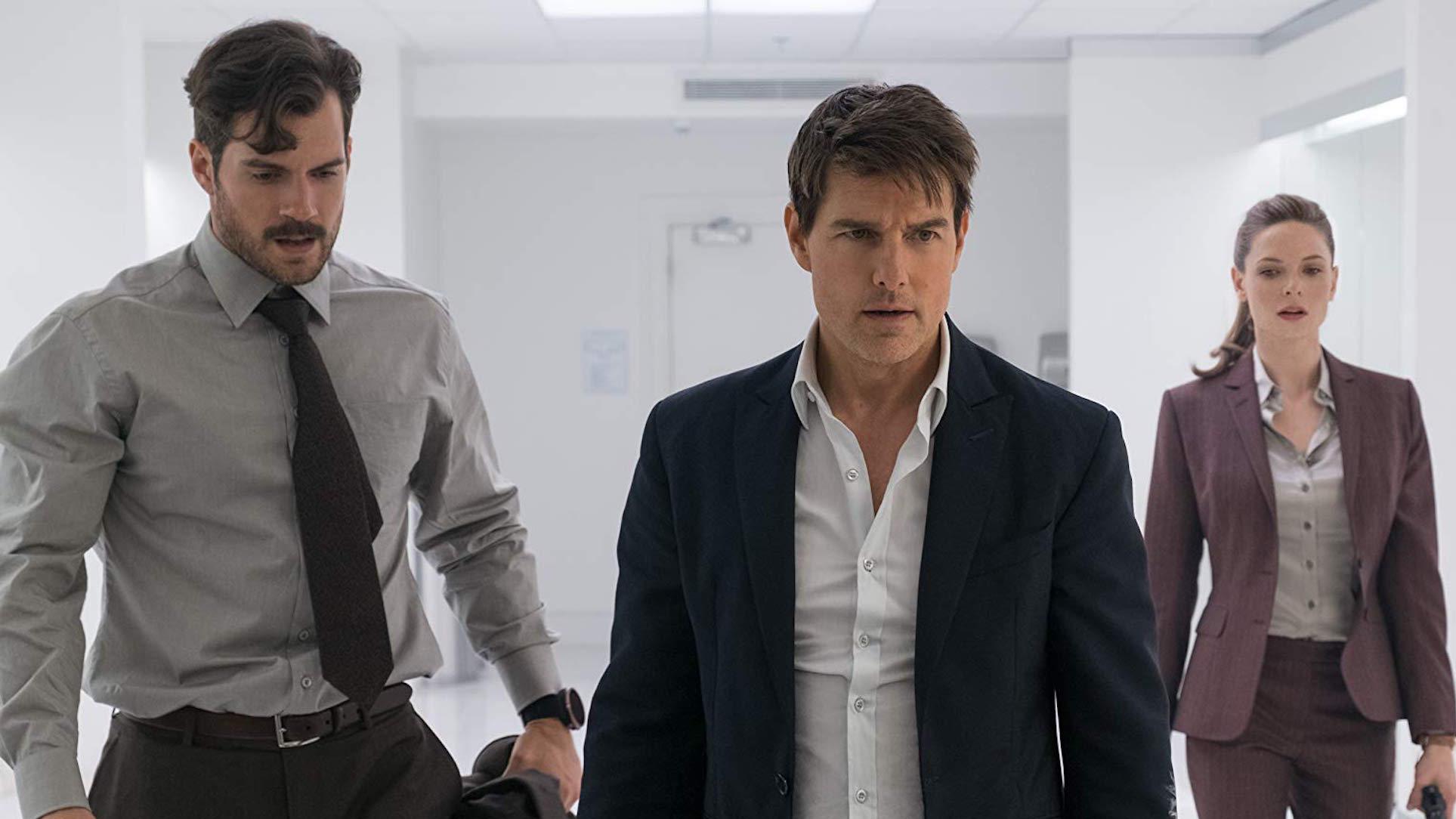 Mission Impossible: Fallout is a remarkable empty-calorie entertainment, memorable for its dazzling action sequences.  It pretends to have a bit of seriousness only to get on with its only main task, which is to thrill.  I had thought I had seen it all at the movies, including every crazy stunt sequence imaginable, only to be proved wrong by this movie.

MI:Fallout is the sixth film in the twenty-two year-old Mission Impossible franchise, and probably its best.  Certainly, it is the one I will rewatch, just to marvel at how it was made.  There would be no other reason to rewatch it.

Having seen all of the Mission Impossible movies, I believe I represent the average moviegoer when I say I remember nearly nothing important about them.  What little I do remember is that these movies feature Ethan Hunt, played by Tom Cruise, as a James Bond-esque agent who performs spy-intrigue work all over the world.  The key differences between Hunt and Bond are that Hunt is American, sexless, doesn’t drink, works with a team, and—every time, without fail—he gets hung up on doing the right thing versus walking away from a botched mission.

MI:Fallout over-emphasizes details about Hunt that I’ve forgotten and will never care about.  These include a long backstory about his wife, his ongoing flirtations with a female British MI6 agent, and his personal feud with a British terrorist named Solomon Lane.  It pretends to be too serious about these character details when it knows that it is just selling a product to moviegoers.  (Look, for example, at the opening and closing credits, which feature clips from the movie.  In its opening and closing, the movie advertises its own awesome frivolity.)

Other inane material could have doomed MI:Fallout.  It plays serious with script ideas that the Austin Powers series made fun of twenty years ago.  These include a bomb-diffusion sequence that makes all other diffusion sequences in movie history seem brief and tranquil.  (The bombs in MI:Fallout—two, synced nuclear bombs that could somehow kill one-third of the people on Earth—have countdown timers that are not one, not two, not five, but 15 minutes long!  Of course, it takes 30 minutes of movie time for the bombs to count down 15 minutes.)

As well, in order to offend no one and to appeal to a worldwide audience, there are nearly no politics in the movie.  Hunt works for a global do-good organization called the IMF, which isn’t real.  In MI:Fallout, he infiltrates a criminal network of independent terrorists.  At one point, they are called (no kidding) The Apostles. This group is described, in a near tongue-twister, as an anarchist rogue covert ops syndicate with extremist splinter cells. Just to be sure that you know they are anarchist, rogue, and extremist, the movie adds that they are funded by a terrorist named John Lark who is—who would’ve guessed?—anonymous and rogue.

Hunt’s mission here, aided by his team (Henry Cavill, Simon Pegg, Ving Rhames, and at times Rebecca Ferguson and Alec Baldwin), is to find stolen plutonium cases and stop Lark from creating backpack nuclear bombs with them.  In the tradition of Mission: Impossible plots, Hunt is eventually accused of being John Lark himself.

He’s not, obviously, and so the movie performs a kind of viewer-IQ test as to who Lark is.  If you are able to guess who it is from the cast list at the top of the last paragraph, you probably should graduate to more complex mysteries, such as Encyclopedia Brown and Harriet the Spy.

All of the plot details, if any of them can be sorted out, seem goofy if you don’t think about them and insane if you do.  The chief reason to watch this movie is thus to see its action sequences, all of which feature Tom Cruise’s apparent athleticism.

Cruise’s excellence depends much on the movie’s director, Christopher McQuarrie (Jack Reacher, Mission Impossible: Rogue Nation), who is not only a proven pro at making Cruise look great, but he may now be among the best living directors of action sequences.

Typically, in an ordinary movie, action is not usually very interesting.  Fight scenes in mediocre superhero movies, for example, clog the screen with movement that distracts from everything—from ideas, tone, and development.  People hitting or shooting at other people is fairly dull, in and of itself.  It’s only when something is at stake for the characters, or for the movie’s ideas, when fighting on-screen becomes interesting.  Movies achieve these stakes more rarely than they ought to.

But there are exceptions, and, thanks to McQuarrie, MI: Fallout is one of them.  It features Cruise in hand-to-hand combat with all kinds of enemies, sprinting away from bad guys, sprinting towards them, jumping out of planes through thunderstorms, and racing through Paris in several different kinds of vehicles.  Those vehicle chases, including the first motorcycle chase, are particularly exhilarating because they are well-crafted.

The greatest of them all, though, is the finale, which should not be mentioned in detail here except to say that multiple helicopters are involved.  It is worth the price of the movie.

This final helicopter sequence made me rethink Cruise a bit.  In my own casual moviegoer’s mind, he’s a vain, suave movie star who loves to look good; he’s somewhere between a pretty-boy type and debonnaire actor (ala Cary Grant).

But in MI:Fallout, he’s a hybrid of Buster Keaton and Jean-Claude Van Damme.  Given his body of work, he must be in any conversation about the greatest action-sequence actors.

It might be true that if you’ve seen one Mission: Impossible movie, you’ve seen them all.  They offer little but two hours of escape, and Fallout might be the best escape of them all.

This is a criticism, but it is also praise. MI:Fallout is best watched in simple awe at the deceptive craft of moviemaking, in order to wonder at the craft of moviemaking.  It is a supremely excellent illustration of how movies can fill all five senses and feel three-dimensional, when they are merely sound and sight in two dimensions.  Just like the deceptions performed by Hunt’s team in MI:Fallout, the deceptions of this movie offer delights that gratify for a little while.