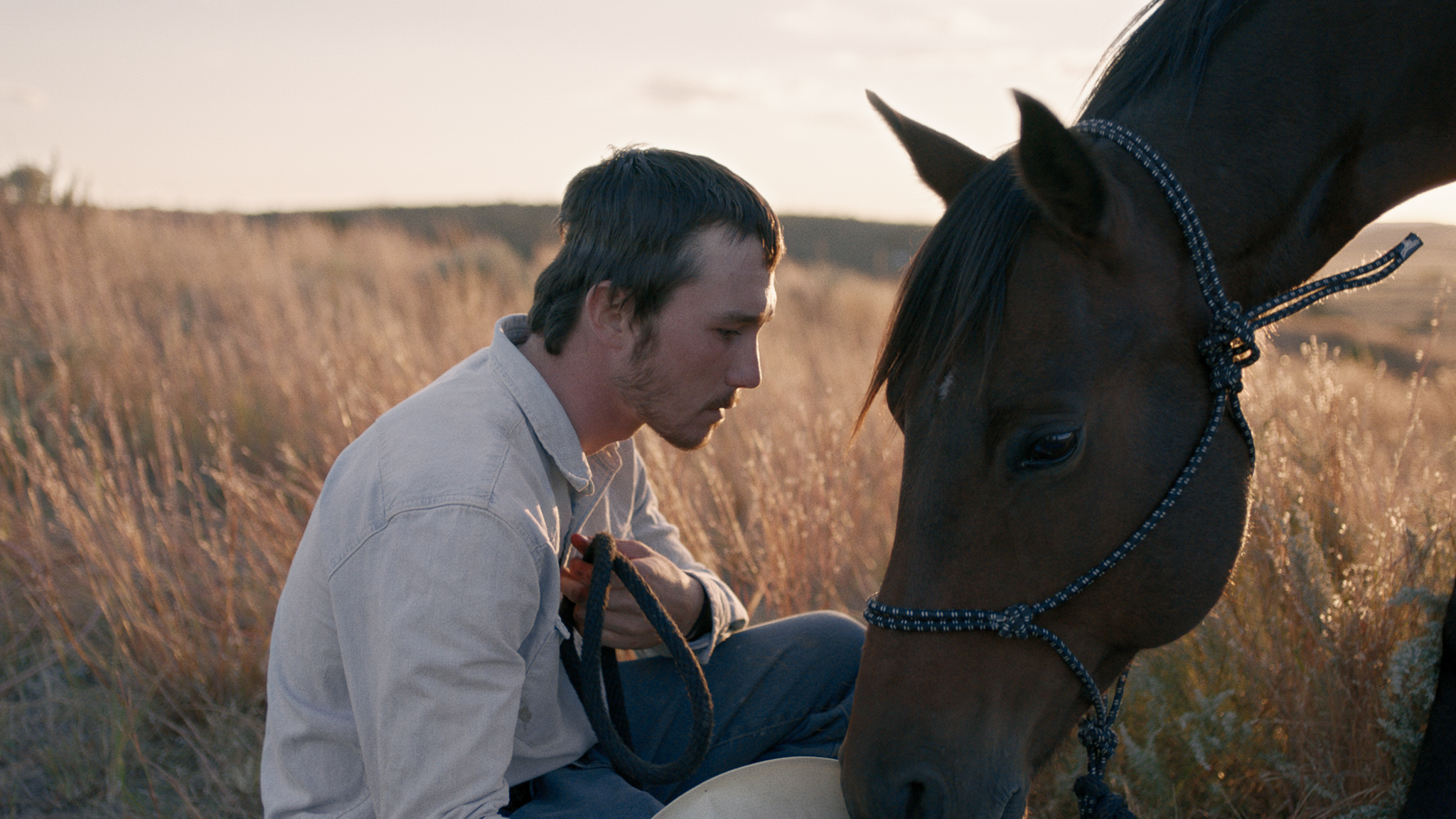 The Rider ends with the sentence, “Don’t give up on your dreams.” Had you told me that before I saw it, I would have dismissed the entire movie as fluff. But, having seen it, I think that this movie offers perhaps the one and only time, in the history of the world, where that cliché does not seem corny, cheesy, or pathetic.

Just as the movie ends with a line about dreams, it opens with a dream of a horse. The dreamer is Brady Blackbird, a young gifted horse-trainer and rodeo rider. When Brady wakes up, he proceeds to pull staples out of the surgical scar on the back of his head. We learn soon after that Brady was seriously injured in a rodeo, stepped on by a bronco. He has been laid up in the hospital, and, given his head injury, he has been told to never ride horses again.

Brady is played by Brady Jandreau, who is not a professional actor but does better here than most actors would. He brings a sense of hard reality to his character. Jandreau seems to really know how to ride, train, and handle horses, in ways that no actor could ever learn, in order to play this part.

The Rider uses—so it appears to me—all untrained actors for all of its parts, as untrained as some of the movie’s horses. It seems like a documentary, and parts of it look like a camera crew showed up to film what was already happening in real life. Yet there is a clear artificiality to it in the style of director Chloe Zhao, who tinges all of the characters and the scenes, including the Dakota Badlands, with a stark dreaminess that is alluring and desperate all at once.

This dreaminess is connected to rodeo-riding, which involves cowboys who may be truer to life than those in the Hollywood Westerns of old. Brady’s love of riding horses, which are wild beasts at heart, is inherently deadly. We know this not only because of Brady’s injury, but also because of that of his friend, Lane Scott. Scott plays himself, a paralyzed 19-year-old rodeo veteran who can only speak through signing letters with his left hand. Although in real life Scott was injured in a car accident, if you didn’t know that, you would guess that in the world created by this movie, he was injured somehow in the rodeo ring.

The plot of The Rider is fairly ordinary. Brady feels conflicted about his injury. He wants to ride horses, and that’s all he loves to do. He also doesn’t want to be like his ambitionless father, who drinks and gambles and lives in poverty on a remote South Dakota ranch. But if Brady rides again, he may die. His right hand fails him at times, freezing when his fist is clenched because of recurring seizures. So Brady must choose between risking his life for what he loves or existing as an ordinary, bored young man, who can only work a dull job in a grocery store.

What makes The Rider alluringly dreamy is the way that it proceeds through this typical plot. Brady’s clear calling in life is as a rider and horse-trainer, and this calling is captured in hypnotic scenes in which he tames and trains semi-wild horses. He lives in an awful, beautiful place of poverty and majesty, surrounded by several friends who pray, sing, smoke weed, and love the rodeo. All of them aspire to ride. Their essential talents are their abilities to be brave and control wild animals. Brady taps into a primal human ability to domesticate animals that can kill him. He knows this, and he knows that he cannot give it up, despite its threat to his life.

Brady’s clear sense of calling, and the movie’s observations about his abilities, are part of The Rider’s validation of the Cowboy as an archetype that is actually alive and well in the 21st century. In fact, what “cowboy” typically means is too narrow for this movie. Yes, Brady handles guns and rides horses in the open West. He also braves wild broncos with aplomb and fear and great patience. He honors Lane Scott by visiting him frequently and making him feel happy. He loves his mentally handicapped sister. He works at a grocery store because he has to, without complaint.

If Brady is a true Cowboy, the movie plays with his identity. Casual viewers might assume that Brady is white. But it is clear only through several oblique clues that Brady, and maybe everybody else in the movie, is a Lakota Indian on the Pine Ridge Reservation, the poorest place in the United States.  He is also a South Dakotan (making him a Midwestern, or a Westerner?) and perhaps a Christian.  What then is Brady? For most of the movie, he is alone, and as a cowboy he may be all of these things—Christian, Indian, western American—or none of them.

The Rider is not a movie for consumptive entertainment. Hard thinking alone opens it up to discoveries. Brady has a head injury, but careful viewers will note that he risked injury knowing that rodeo-riding could cripple or kill him like his friend Lane. He also risked it knowing that, if either result would happen to him, he would leave his father and sister hard up; and after the recent death of Brady’s mother, they could not suffer the loss of another family member.

What I hadn’t ever thought about before is that horse-training is a gifted calling, a primal urge for some people, an urge with unknowable origins that extend far back into time and connects horse-trainers to the wild lands that they desire to roam. Brady’s gift is beautiful, awesome, and inherently human. Brady’s identity goes beyond race and class and into something more essential—the human need to be among and to understand wild beasts, which is in a way an exploration of one’s self.

The Rider provides needed vision for those of us who know little about Pine Ridge, the rodeo, paralyzed teenagers, and the inescapable desires to do what we love in spite of its severe risks. In short, it offers real vision for the world of Brady’s dreams.