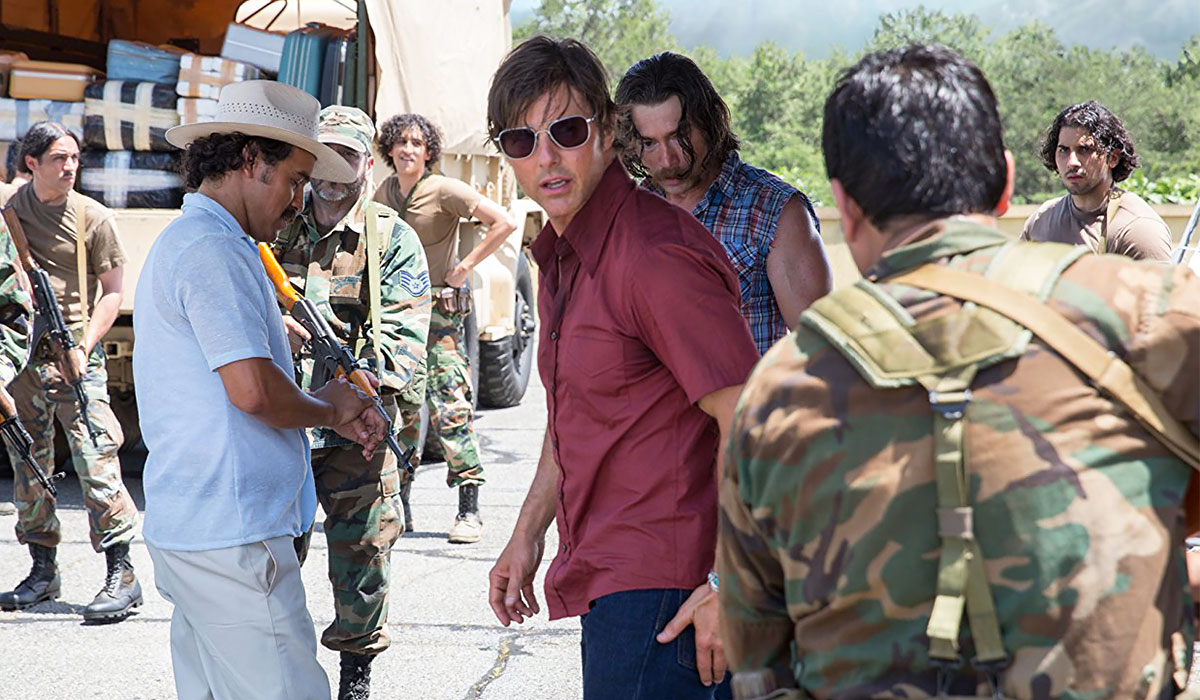 As a child of the 1980s, I was repeatedly told to say “no” to drugs. Our school had the D.A.R.E program, and we watched a variety of anti-drug after-school specials. There was a rather cute D.A.R.E. dog which any one of us could hold, if we were good and sat still long enough. A police officer visited the school each week and taught us what drugs were, why they were bad, and what kind of people we should say “no” to.

I wonder what I would have thought back then if I had known about Barry Seal.

Seal is the subject of the new quasi-biopic “American Made,” a man whose story by itself ought to destroy all sanctity and high-mindedness about America’s War on Drugs. Somehow, all at once, Seal was a gunrunner for the CIA, a transporter of rebel Nicaraguan soldiers to middle America, and a drug smuggler for the most powerful illegal-drug cartel in the world. Somehow, the CIA knew about the drug-smuggling. Somehow, this was considered legal and just.

At the beginning of “American Made,” Seal (Tom Cruise) is a TWA pilot who participates in mild smuggling on commercial flights, mainly of Cuban cigars and marijuana. This makes him CIA-material, and, in 1978, Seal is recruited by a CIA agent codenamed ‘Schafer’ (Domnhall Gleeson) to take reconnaissance photos of Soviet-funded communists in Central America. ‘Schafer’ tells Seal that he can help “build nations,” which is, Schafer exclaims, “America at its finest!”

Because Seal is attracted to the fast, shiny airplane that the CIA gives him, he can’t say no. He can’t say “no” to much, and especially not to lots of cash. The CIA doesn’t pay him well enough, so when Seal is offered a chance to smuggle drugs for Colombian drug lords, the infamous Medellín cartel, he gladly risks his life and his family. Paid $2000 per kilo of cocaine smuggled, he’ll do anything. Eventually, he’s gleefully flying his cocaine-filled plane back and forth between the U.S. and South America.

Set in the late 1970s and early 1980s, the movie uses TV news montages and educational montages to explain some of its more particular and forgotten historical details. Like other recent movies, including “Moneyball” and “The Big Short,” “American Made” contains faux-educational montages that tell us what the Central American countries are and who the major players in them are.

It also uses simulated found-footage shots, including videotapes from 1985-1986 of Seal—played rather charismatically by Cruise—that explain who he worked for and what he did in the early 1980s. These tapes allow Seal to narrate the movie, in the guise of a confessional.

“American Made” argues that the CIA knew that Seal was a drug-smuggler, and that it protected him from the legal repercussions of these actions so that he could transport tens of thousands of AK-47s to the contras in Nicaragua. Seal eventually figures out a better trade deal. The contras don’t want the guns; they want Colombian cocaine. It’s the Colombian druglords who want the guns. So Seal flies the CIA’s guns to Colombia, brings the cocaine to Nicaragua, and the contras transport the cocaine to south Florida and sell it there. For awhile, everybody seems to win.

Especially Seal. Forced to move to Mena, Arkansas, he’s given a 2,000-acre estate there by the CIA, including an airport, where he builds a cargo-transport fleet. Soon enough, he’s swimming in cash, almost literally. One of Seal’s major problems is that he has too much cash and too few places to hide it. He stuffs closets full of it, buries suitcases full of it in his yard, and puts as much cash as he can in the barn’s hayloft. Eventually, the small bank in Mena gives him its main vault to use. As the great philanthropist of Mena, Seal is loved by his bankers.

The movie also argues, sometimes convincingly and sometimes not, that Seal is a representative American—an entrepreneur made and enabled by the American state, a pragmatic problem-solver, a charmer, a family-man. Seal’s wife Lucy (Sarah Wright) completely enjoy Seal’s success, no matter how he achieves it. Tom Cruise plays Seal in a Cruise-like way, with charisma and subtlety. Cruise’s character is cocky and self-assured, qualities that Cruise has brought to many of his representative American characters, including Maverick in “Top Gun” and Lieutenant Kaffee in “A Few Good Men.” Yet Cruise here is also simultaneously snake-like and sympathetic, wickedly crafty and yet vulnerable.

“American Made” is perhaps too sentimental about Seal. Its last 45 minutes feature Seal’s downfall, and they have less energy than the more exciting first-half of the movie, which boisterously depicts Seal’s rise. Nevertheless, Seal is an ordinary man caught up in imperial games. He’s a product of CIA-meddling in the affairs of other nations, a creation of a state that encourages covert immorality and hypocrisy. “American Made” features five Presidents, from Jimmy Carter to George W. Bush, implicating them all—especially Ronald Reagan—in Seal’s glamorous life of smuggling.

Whether the movie is historically accurate is another matter. I asked myself whether much of the movie were true; after all, it has the qualifier “based on a true story” at its beginning, a phrase which can mean that nearly everything we see is an invention. My suspicion is that Seal’s story, and the story of American involvement in 1980s Central America, is far more complex than what this movie offers us. As well, I felt far less for Seal than the movie, I think, wanted me to.

Yet, even if most of the movie is partisan or warps history, one general point of “American Made” rings true nonetheless: that imperialistic nation-building has done little good and much harm for American citizens. Blowback and unintended consequences are features, not rarities, of interfering in the wars and political entanglements of other countries and other political alliances. If Seal is a representative of anything, he is a representative of that.

It has struck me often that many Americans on the right side of the political spectrum, which is my own preferred side, don’t trust government in terms of taxes, welfare, guns, and social engineering, but they do trust it when it comes to foreign policy and war. “American Made,” even with a perhaps needless anti-Reagan slant, ought to provide lessons in who and what we should trust. As I should have learned in D.A.R.E. class in elementary school, it is not always those powerful government entities who claim, prima facie, to help and protect you.