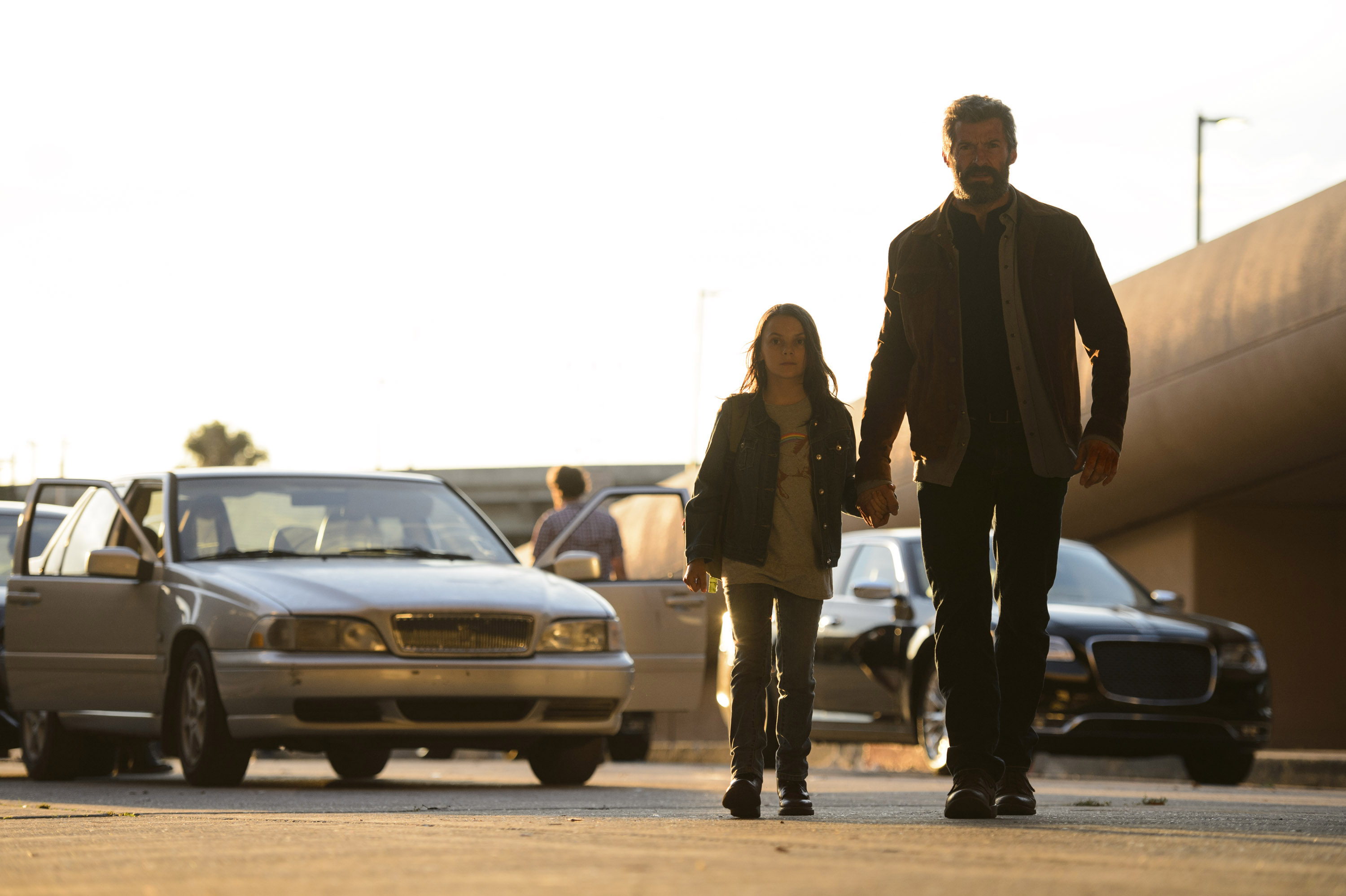 Midway through Logan, the latest Wolverine movie about that most popular of the X-Men characters, an old man and a young girl watch the classic Western movie Shane on TV. As we watch it with them, she asks when the movie was made. He says that it’s about a hundred years old, long past its prime.

This statement later becomes a challenge for Wolverine himself. Are all the old mutant superheroes washed-up? Are they all like the cowboys of old, on the verge of going away forever?

Logan says no, not just yet.

Contrariwise, the old superhero, the last of a dying breed, has one more round in him. The movie declares that an age-50-something Wolverine—a modern-day Shane, apparently—has a little something left for all the comic book-loving kids out there.

If you know anything about Shane (1953), you’ll know a few necessary things about Logan. About a few other things, should you be looking for a Shane imitation, you’ll be surprised.

Logan honors Shane by tearing parts of it to shreds and then quoting from them.

Although I don’t mean to pun about blades and claws too much here, you’ll see a lot of them, too. If Logan is Wolverine’s last stand, he’s not going down without slashing his way to and through record numbers of bad guys.

So Logan is one of those modern Westerns, like No Country for Old Men or the recent Hell or High Water, that just can’t quit its genre. We start out on the Texas-Mexico border, then cross it, then cross again, only to do more border-crossings. Eventually, Wolverine heads to a mutant sanctuary called Eden, which is somewhere in northern North Dakota.

But let’s backtrack. Logan opens with a washed-up Logan/Wolverine (Hugh Jackman) chauffeuring for a living somewhere in Texas. He takes care of a senile Charles Xavier (Patrick Stewart), affectionately known as Professor X, Logan’s old teacher whose telekinetic powers are so uncontrollable that they must be contained in a makeshift asylum. Logan’s is a life of quiet desperation. He limps, he gets beat up by gangs, he’s a loner, and he’s generally just ticked off at everything. This leads to Professor X declaring, in one of his more lucid moments, that Logan is an unhealthy man with no family.o

Enter the potential family members for the lonely Logan. One who shows up is Laura (Dafne Keen), a mutant orphan girl on the run who has been communicating telepathically with Professor X. She seems puny, but she looks mean and tough and she growls a lot like…well, a certain other family member to be revealed later in the movie.

There are many corporate thugs after Laura, really bad but slashable dudes, and so we get an early chase scene that answers the question of what it would look like for Freddy Krueger to be in a Mad Max movie.

Thereafter, reluctantly, Logan gets his family. On an extended trip through the American plains, he takes care of the senile Xavier and little Laura, a surrogate father and daughter for him.

Cornfields and small towns abound on this trip, as does Wolverine’s need for his claws. Heads will and do roll. (Have I mentioned yet that there’s a lot of slashing?  Oh yes, there is.)

I admit that, for me as a mid-30s guy, there is an attractive primal scent about this movie. Logan is dirty and world-weary, and he wears a masculine black suit, tieless and dapper. He drives a limo that resembles a tank. He refuses treatment from doctors because, if somebody’s going to take care of him, he’ll do it himself, thank you very much.

Like the older Batman in The Dark Knight Returns, Logan/Wolverine is beyond a midlife crisis and living in the lonely land of existential anti-heroes—scarred, gimpy, amoral, and suicidal. That his redemption occurs in the American heartland is odd but inspiring, given our obsessive focus on American coastal centers of power these days. (For once, praise be, a superhero movie that doesn’t involve a metropolis!)

It could well be that Logan is the best superhero movie of 2017, or even the best of the last five years. But let us admire it in a different way. Logan is an engaging science-fictional western that earns its right to invoke its predecessor, Shane. When I was a kid, I watched X-Men cartoons. When I was a grown-up, I watched Logan, and again I remembered being a kid who watched those cartoons, in part to root for Beast and Cyclops and Wolverine, and in part to deal with a dark and dreary world.

And now, as all adult fanboys ought, I shall give him a classic Western send-off.

So long, Wolverine. So long.