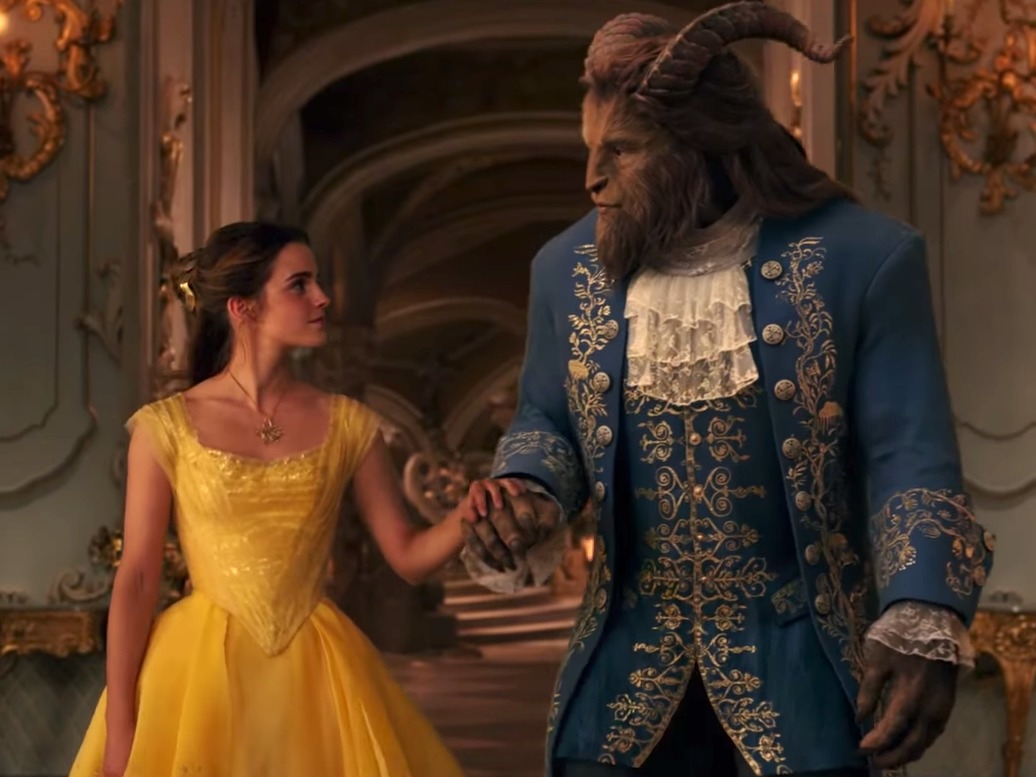 The new Disney musical “Beauty and the Beast” raises the question of whether cloning is ethical. According to my ever-dimming recollection, this 2017 live-action version of “Beauty and the Beast” repeats the beloved 1991 animated version nearly step for step. Candles and feather-dusters will sing “Be Our Guest.” The beast will huff and puff, and then sigh and brood about love. Belle will pose again and again and again as a princess. Several shots, including repeated long-shots of the Beast’s castle, will blatantly suggest, “Come to Disneyland, where spending has no limits!”

On the question of cloning, most people, after watching this one, will probably answer “meh.” This 2017 “Beauty and the Beast” is good enough for the kids, and curiosity-inducing enough for those who want to see Belle in the flesh. Remakes are fine, if they are watchable.

The story is all sanitized Disney fairy-tale. The young Belle (Emma Watson) lives in a provincial French town—she can’t tell us enough how provincial it is—where she’s pursued by the narcissistic braggart Gaston. While traveling away from town one day, Belle’s father Maurice (Kevin Kline) gets lost in the forest, only to stumble upon a remote castle. That castle is enchanted and ruled by a massive, talking Beast. Maurice is captured by the Beast for stealing a rose, so Belle must try to rescue her father.

The Beast, of course, is a cursed aristocrat, who can only turn back into his aristocratic human self when a woman truly loves him in his beastly form. Also cursed are his servants, transformed into all of the following: a candle, clock, wardrobe, teapot, tea cup, feather-duster, hat rack, and harpsichord. If you have a phobia for talking anthropomorphic objects, this movie will trigger you terribly.

As is necessary in these things, Belle must be captured by the Beast, who must not get along with her until he falls for her. Perhaps then she will overturn his curse? Well, before that, there must be a contest to see which male is the true Alpha Male and will get the girl: the noble Beast, who just needs some companionship and feminine refinement to become a true gentleman, or Gaston, who is too nasty to reproduce with. (I kid not; the movie makes overt reference to Belle having children with Gaston multiple times.)

Belle, meanwhile, realizes that she couldn’t care less if she lives in a big city or not. As a serious reader of all books, she’ll trade her dreams of adventures in Paris for the Beast’s enormous library. Although the Beast lives far from the fancy restaurants of Paris, the “Be Our Guest” number shows Belle that, not only is she living in an amazing castle, she also has the best restaurant, butler, maid, and music service in the world. What more could a bookworm want? Stay at home, Princess Belle! Read all day long!

My amusement with the plot’s contents isn’t sarcasm; it really springs from delight with the movie’s charm. The musical numbers rouse, as they are intended to do, and the kids in the theater that I attended seemed pretty happy.

Yet there are two movies here, neither of which get along well with the other. There’s the Disney musical with the melodramatic love story. And then there’s everything in and about the Beast’s castle. Oddly, the clock and candle and the other household objects all have a steampunk aura. They look like they just walked off the set of a Guillermo del Toro movie and into the wrong picture. Their eyes and faces, like that of the beloved teapot Mrs. Potts, are really difficult to see. Our difficulty finding faces on them makes them appear a bit cold and strange. The harpsichord and the hat-rack are spidery, and the wardrobe is the stuff of nightmares for kids who believe that monsters haunt bedroom closets.

Not that these faces are a wrong choice entirely. But the castle scenes possess a haunting fascination, a touch of the Gothic and grotesque, which does not complement the Disney-princess vibe of the storyline. The beast’s servants are more alien than human; they are fantasy creatures all of their own, not humans trapped in household objects. Thus the “Be Our Guest” number is creepier than it ought to be. But when the objects battle the village mob in the end, the harpsichord does look like it belongs in the mob scene as it chucks parts of itself at the eyeballs of the villagers. No doubt, it enjoyed itself.

The look of the Beast is stuck in between these two tonal aspects of the movie. On the one hand, he’s a rich alpha male training to become the protagonist heroine’s husband (and father of her children, who will be beautiful beastlings). But he also looks like a cross between Fabio, a bull elk, the faun from Pan’s Labyrinth, and Chewbacca. His CGI mask never quite coordinates with Watson’s loving glances. She’s too human for him. He’s too elk-ish for her.

But oh, that castle. Despite the clash between the look of the picture and its melodrama, the castle is a wonder to sweep in and through. Even when its dark and dusty, the castle has corners that you’ll want to explore, knowing that they will open up into new wings with new fantastical discoveries. Plus, when the wardrobe gets going, the costumes that it spits out will dazzle and thrill (modestly, mind you). This movie is the surest bet of the year to receive an Academy Award nomination for Best Costume Design.

Although Bill Condon as the film’s director gives us a few nice shots to look at, I’d like to see this story given to a visionary director who embraces the weird and the grotesque. Let that director not clone the 1991 movie, but instead totally transform it. The choice of Tim Burton might produce too sentimental of a “Beauty and the Beast” love story, although he’d wouldn’t have to change the look of the castle at all. Del Toro or Terry Gilliam might have been the best choices. With one of them, or someone of similar sensibilities, “Beauty and the Beast” might have become much more disturbing, as it probably ought to be.

I know, I know, Disney would never allow that, but come on. A girl who falls in love with a hairy, elk-like guy with horns is nothing but weird.

Rated PG by the MPAA, who gave Disney a favor here. “Beauty and the Beast” might be too scary for very little kids. It is dark and haunting some of the time, and there’s a scene in which a wolfpack fights the Beast that is not usually featured in PG fare. The rating of this movie adds to the extensive proof that the MPAA is doing no one much good.