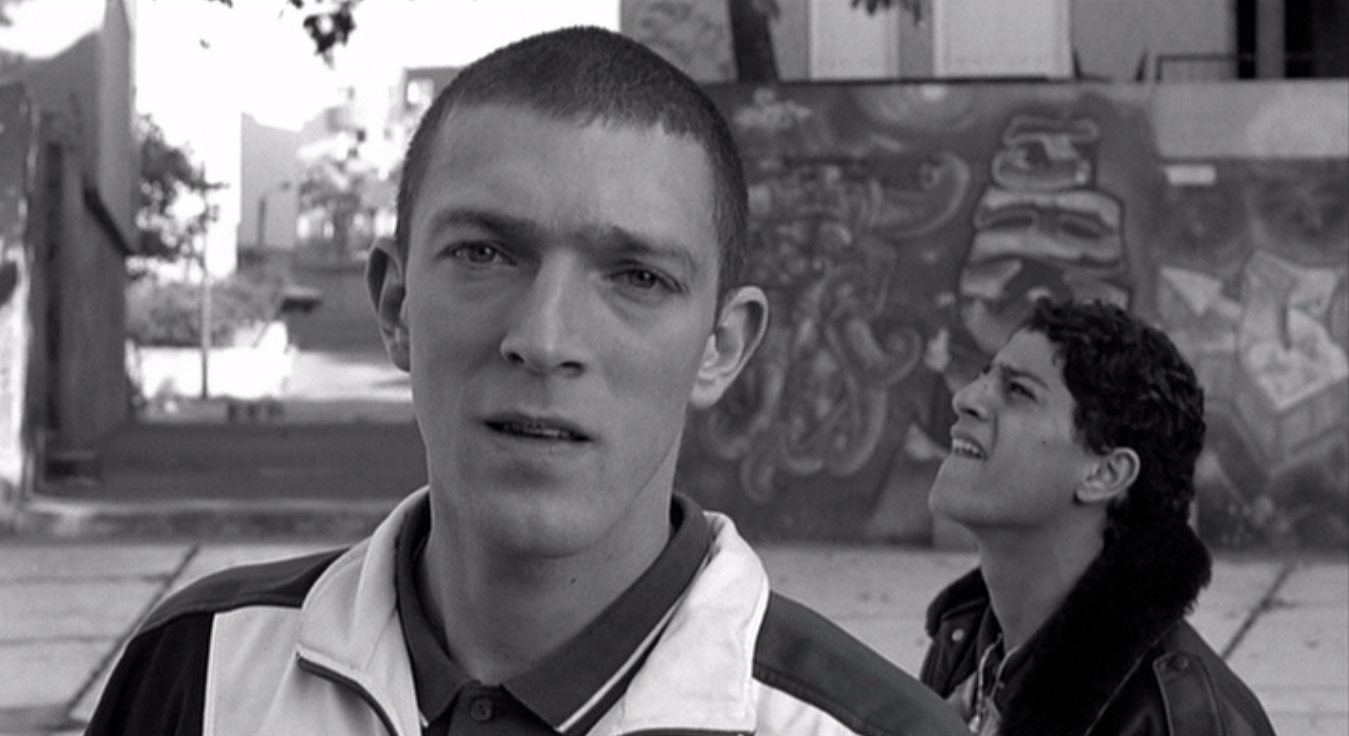 Two points of view for this movie. One POV is the cinematography, watching just for that. An astounding work, so many great shots, plus editing. Probably because this is black-and-white, which makes everything better, generally, it’s higher rated than a colorized version would have been.

The Second POV: the movie seems to be some kind of argument on behalf of the three young men who represent, as a unit, Multiculturalism in France, the three of them being an African-Frenchman, a Jewish man, and a Muslim-Frenchman (called a fake Arab in the movie).

The three men were involved in a riot on the day before this movie takes place, or so we are led to believe. The movie follows them around, comparing the media’s televised coverage of the riots with their own experiences of being poor young males alienated from whatever French society is.

Yet … the movie accomplishes the opposite of its seemingly intended message of Tolerance for the Multicultural-Other Group. I watch this as an observer who cares little to nothing about my own biases, or I try to, and instead I inhabit as best I can the mindset of all kinds of reactionaries who would by default be anti-riot (or anti-protest — pick your term). I am talking about grandmothers, relatives of street cops, city council members, public school teachers, pastors, waiters trying to make a buck, and so on.

Watching this movie, the reaction probably would be: these guys are young punks who need to reform. They wield guns, they use drugs, they repeatedly say “fuck the police.” Just stop there. The empathy for their POV is gone with most of the possible audience in France or elsewhere.

Don’t get mad at me for this take: assume I don’t care. You know it’s true — so many people seeing these guys stare at the camera and wield a gun, they’ll get as much love as Travis Bickle ought to. Most are going to see these guys as deranged, and I’m missing the “social critique” that supposedly says, as Ebert does, that society is to blame for who these three guys are.

Also, personally, I find it hard to watch characters who are so flippant with firearms, having zero sense of any notion of firearm safety. Maybe it has artistic purpose here, but it’s pretty damn uncomfortable and unsettling whenever I see it. This just signals repeatedly that these guys are idiots, which makes it that much harder to empathize with their plight.

Now yes, at some point, the men split into different points-of-view. These have been discussed ad nauseum elsewhere — to be violent against the cops/system that oppresses you, to reform it, or to be non-violent and strategic in confronting the almighty System. In that way, the movie seems highly influenced by Spike Lee. With Kar-Wai-esque aesthetics, that makes the movie inherently interesting, to me at least.

So many great shots and sequences in this movie. For that alone, the movie is worth watching for those who greatly appreciate just that aspect alone. Superb moviemaking, but not necessarily storytelling.