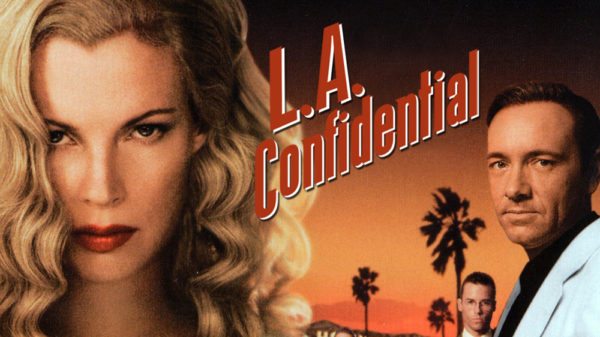 What an odd endorsement of cops.

For me, LA Confidential falls among the 1990s set of paranoia-conspiracy films; it’s just set in the 1950s, 40 years distant from part of what it is criticizing. That, partly, is the LA police, who six years before this movie was released came under national heat for Rodney King and later OJ Simpson. The entire film, as you probably know, features the most corrupt police department in the world

And yet are LA cops corrupt? This movie wants to have it both ways, and while it’s an anti-police-system movie, just about the particular department it depicts, it’s a pro-cop movie. There’s some great guys with good hearts in the department who will seek Truth and Justice.

We’re supposed to root for the three main characters, who represent three types of cops. I forget their character names, but you’ve got Guy Pearce, the “politician” cop who believes in justice so much that he wears glasses, which is too much a librarian look, according to the other cops. Then there’s Russell Crowe, the hothead cop who has such psychological damage from his past that he will do anything to stop abusers of females, except when he’s abusing females. Both Pearce and Crowe have troubled pasts that make them want to save the world from the bad guys in them. They must find a way to unite, of course.

Then there’s Kevin Spacey. It’s weird to watch this movie knowing what Spacey was probably up to in real life, especially his scene with the paid male prostitute of sorts. Anyway, he works with the celeb gossip mag “Hush-Hush” to frame all kinds of people. However, he, like Pearce and Crowe, also have good hearts.

This trio is a group of heroes, despite their sick flaws. And we follow them and end up rooting for them. It’s strange to have a 1997 movie not know what an “anti-hero” is. In any other era, you’d at least get the Crowe and Spacey characters as anti-heroes that both you know and the movie knows you shouldn’t root for. Am I supposed to appreciate the fact that the Crowe character beats up the Basinger character, and yet she’s all in with him? This movie says “yes!” For a moment, I can see why the Woke would call out this movie.

The movie has too many flaws to count. It wants to be “Goodfellas” for awhile, until it turns into a detail-filled police procedural, with a huge amount of exposition. That could be okay, but it uses a voiceover narrator with no good reason, only to abandon him later. Lots of scenes where the characters talk to each other about info when they don’t have to.

There’s not irony or a whiff that these guys, by the end, were anti-heroes or suspect cops. They pursued Justice and they win. I am confused about the movie’s tone, and yet notice that it was a huge hit with critics at the time it came out, Oscar-nominated and all.

The Basinger character plays prostitute-with-a-heart, beloved by the Crowe character, a weird relationship for sure. Does her character need to be in the movie, plot-wise? I missed how she even really fits in at all. Thus Basinger becomes a Veronica-Lake lookalike turned into a Marilyn Monroe-lookalike. The simulacrum effect appears throughout the movie, in shots of characters in mirrors or reflections in glass. The Pearce character is two men, sort of, and even literally: with glasses and without.

I should like this movie and on better days I would. What partly ruins it is reading enough LA crime novels to know that better can be done. Plus, I must say, I like “LA Noire,” the Rockstar game, as a better evocation of this world. More fun to spend time in that game.

I hate to count this as a movie I once loved but now didn’t find that great. That probably affects my rating, too. Take it or leave it.