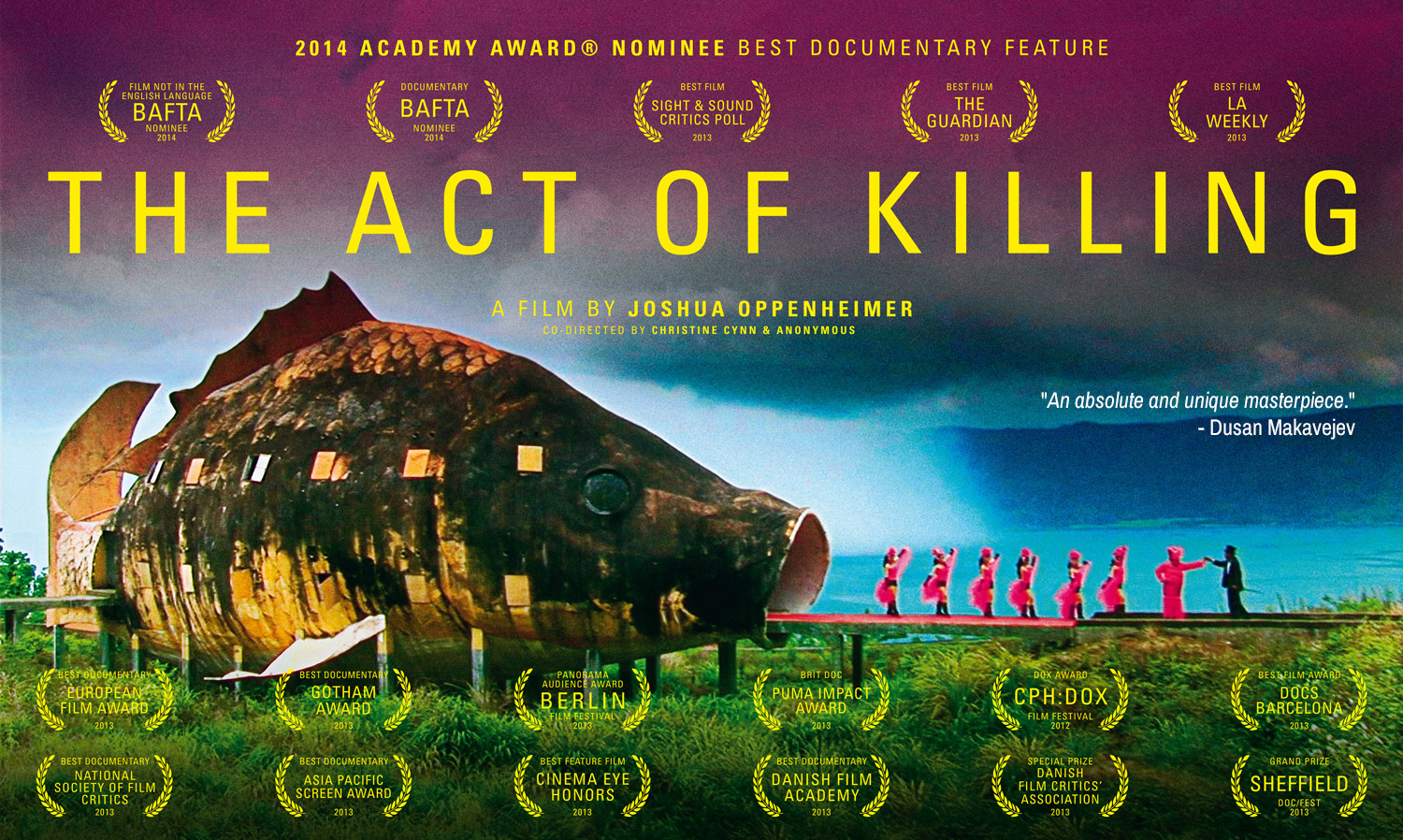 The Act of Killing

“The Act of Killing,” while entirely unpleasant as we sit with gross murderers who gloat over their wanton killings of the past, yet has something refreshing for us Westerners. The killers, political and of the State, are seemingly honest and straightforward about their killings.

They are of the paramilitary group Panclasia, in Indonesia. Some of them call themselves “gangsters,” which they believe, mistakenly, has an English origin associated with “free men.” Back in the 1960s, they were responsible for killing communists, or those who appeared to be associated with communist revolutionaries in Indonesia, most of whom, the film suggest, probably weren’t.

The killers are, in parts of the movie, proud of themselves. They’re asked to describe how and why the killings happen, as so to satisfy the documentary makers’ request, they decide to make a film about it.

That experience of filming their actions partly comes from their love of Hollywood. Anwar Congo, the film’s star in a way, thinks he looks like Sidney Poitier. He admires John Wayne. His co-belligerent — whose name I forget but who as a gangster makes a run for local political office and is, in my view, entirely grotesque — enjoys dressing up in drag for the film.

They’re making no better than a B-movie, and really it’s much worse. Congo mostly acts as one of his own victims. The film is weird and bloody. While they film it, they consider their image. Should they appear to be so brutal? On the one hand, appearing so has its virtues: they will continue to be feared. On the other hand, well, nobody — not even Stalin — wants to look like a mass murderer.

There’s a double-bind in this movie, which plays like a reality-TV drama to me, as the movie production continues and the men each open up more and more. Be seen as a killer, which seems great to them, or distance themselves from the killings, which would be a good PR move globally.

In several moments, they are honest. One of them says that he’s a winner, and that history rewards winners. It does. They are respected, or feared, but alive and cackling about the past.

In another honest moment, this winner of a former killer states frankly that all morality is a convention. The Geneva Convention is just a moral system in play today, but may not be tomorrow. He had the right to kill so many people, those communists. The men enact some of the killings, in the very spot where they happened. At several points, they use a technique involving a thin wire wrapped around a victim’s neck.

They are right, in a sense: by what moral standard does any system of power operate? They don’t seem to have one, and they sense that since no higher power can stop them, or did stop them, morality may be nothing but a fiction. We know that many of our supposed leaders — or most of them — believe this. It’s a functional political doctrine. But they won’t say it, like these men do.

Nevertheless, you can tell they aren’t psychopaths, at least not all of them. Congo is haunted by nightmares, regularly, about all of the killings he did. He seems to regret them occasionally. At one point, they consider what would have been had they been sons of communists murdered by men like them. They understand the rage of their foes. Still, they hate communists.

One question here is whether film enables killers like these men. Did they, in real life, imitate the movies they loved? And when they act out their killings on film, aren’t they celebrating violence? The answer could be yes, and then again, by acting their bloody pasts out, maybe there’s an opportunity for remorse. It could be that their artifice of murder on film creates empathy for their former victims. You’ll need to watch the movie to find out.

One naked fact about humanity is that what these men did and say about what they did is normal for history. As one of them says, it all goes back to Cain killing his brother Abel, the founding murder of civilization, which is built on murder. (The shots of the men in shopping malls and on city streets, filled with consumerist markers such as Pizza Hut, seem to echo this point.) Siege warfare, rape of victims, the slaughter of the powerless — nowhere in the world can any people say that they have stood above all of this. One of them talks about the Americans vs. the Indians, which he might’ve gleaned from history or the movies or both. Throughout the film, Congo sits by an Indian head statue. It would seem to be a marker of the bloody past of even the great civilization they admire, which is America.