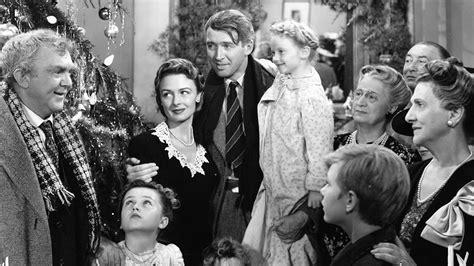 Probably there has no movie that argues for small-town American bourgeoisie lifestyle more than “It’s a Wonderful Life.” Too bad it is paired with hokey theology.

The entire movie, a riff on “A Christmas Carol,” depends on the Ebenezer-Scrooge-like Potter, a handicapped man no less, stealing $8000 from the Bailey Building and Loan. The movie contrasts Potter’s values with George Bailey’s. This is made as explicit as can be in the “what could have been scenes” where Bailey looks at what life in Bedford Falls is like without him. What does Potter stand for? Monopolistic domination of everything, which is anti-bourgeois, in that he allows casinos and strip-teases in Pottersville.

Without George Bailey, Bedford Falls and probably America itself will end up as some kind of Las-Vegas-style hellhole.

The movie argues as well that after World War 2, depression and suicide are serious options for the bourgeoisie, who find themselves screwed over by the Potter-run banks that would lie to them, steal from them, and use the legal system to destroy them. George Bailey is the desperate man after WW2, in so many movies, with an inability to adjust to the harsher post-WW2 world of Potter-esque temptations, including the desire to do whatever one wants and pursue pure self-interest. Bailey is repeatedly offered such a life and wants it. He probably is a devout Kantian in that he wills what he ought to, in terms of American bourgeois duties, for the good of the social class he represents. This all comes back to him, of course, in the famous final scene of the movie where the entire social class gives back to him.

I am not entirely sure about this, but the movie seems to be based on Kantian ethics since it pits George’s self-interested wants versus selfless duties. Those duties include sticking with the family business, aiding the citizens of Bedford Falls, and doing one’s patriotic duty during wartime. As well, he sticks to bourgeois values of getting married, having several children, and being a good small-town citizen and business owner. Note how many times the movie repeats that George does NOT want to do these things but does them anyway. Probably it helped that Mary was so frisky–biological needs before financial ones!

Add that to the movie’s hokey theology, as I said. The generic idiot angel Clarence aids Bailey, as a Dickensian ghost of Christmas present, plus as a lucky star to wish on. The townspeople pray to “God,” a generic one who is too busy to help directly but who sends Hallmark-like angels to show George Bailey that his duties ought to be performed and his bourgeois values were right. The movie signals in so many ways that despite the general presence of nominal Christianity in small-town America, actual orthodox Christian theology is dead, replaced by feel-good sentimentalism, plus the aforementioned, unexamined duties and values of the dominant social class.

It’s funny that George Bailey is running a bankrupt business, which is affirmed as good and true by the movie. His Building and Loan, because it does not have the reserves to cover all of the deposits, leading to the bank-run disaster, is inherently bankrupt. Bailey is no different than Potter here; both run fractional-reserve banks susceptible, as people knew in 1946, to bank runs. The only thing that keeps Bailey’s bankrupt B&L in tact is his speech and charisma, plus his willingness to forego his honeymoon, which is yet another example of him choosing duty (the family business) above all else.

At the heart of the movie are economic collapses, suicidal depressive moods, and a domineering violence that peeps through several times. Only the hokey “angel-needs-his-wings” belief can save George Bailey from that mess, and those of us in the real world know that that belief is nonsense, although it has done good business for Hallmark.

I still like this movie because Capra’s direction is awesome, Jimmy Stewart is dynamic, the plot handles its extreme complexity with such ease that even children can comprehend it despite its intense focus on obtuse economic problems, and — to put some cards on the table — I quite like most of the bourgeois elements of the movie. Those include marriage, children via marriage, good friends as neighbors, walkable prosperous towns, and decency between fellow citizens. Yes, I would rather have that than Potter’s offer. George was right to tell him to shove it.

I want to know if Potter was arrested for stealing that $8k from the Baileys. He moves from being just Scrooge at the beginning of the movie, to being likened to Judas and Satan. This movie really hates his kind of businessman.