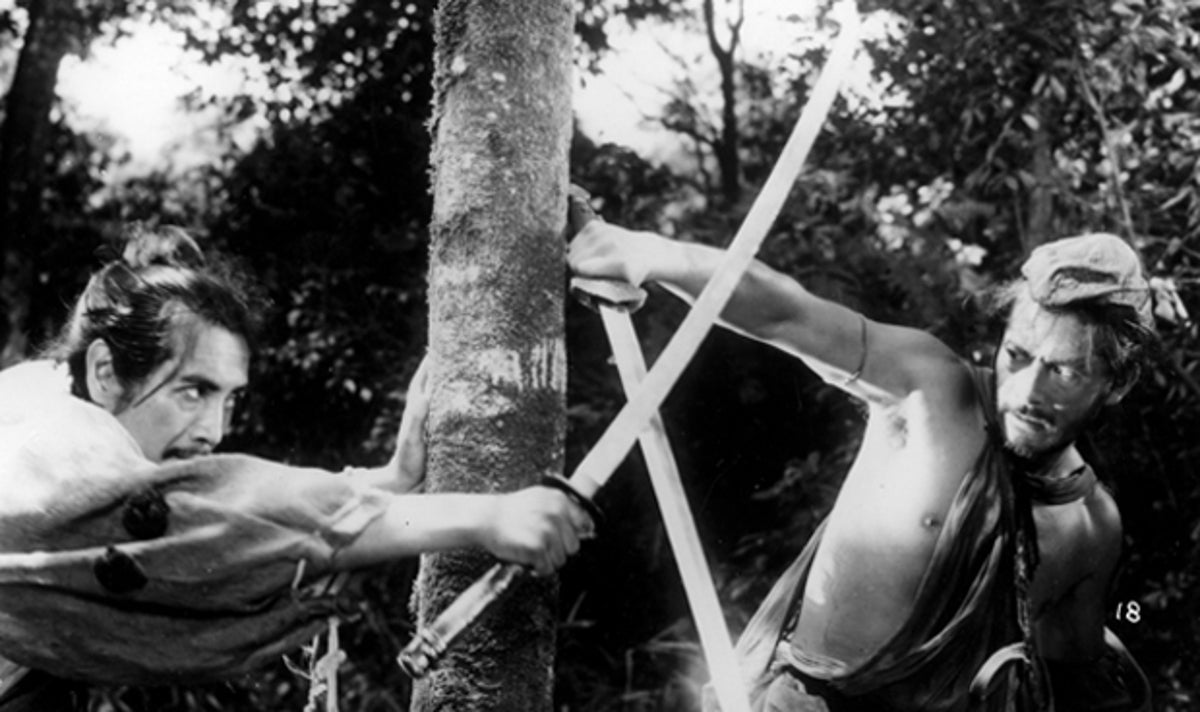 Try this: Type “Rashomon” into Google News and see what you come up with. I’ve been doing just that over a period of years, since I began teaching Akira Kurosawa’s great 1950 movie in my introductory film class, and the results are always stunning. You should get hundreds, perhaps thousands, of recent hits. “Rashomon,” a black-and-white Japanese movie set in medieval Japan, is as relevant as ever; the title is still applied to everything, from political scandals to military propaganda to pro sports rumors, in media all over the world.

That’s because the film “Rashomon” is famous for depicting four different versions of the same event—a potential rape and a murder in a secluded forest, involving a bandit, a nobleman, and his wife. None of these versions is even close to the same. And so we’re shown four storytellers who all narrate different versions of the same event. They might all be lying, delusional, or unintentionally mis-remembering what happened. We end up learning that none of the stories is completely accurate. After we watch all four versions, all of them seem to be false in some way.

So what is real and what is true? The movie says that it may be impossible to ever really know. The “Rashomon effect” occurs when the truth or essential facts cannot be known because too many conflicting stories exist. With the movie, Kurosawa asks relevant questions, with no obvious answers. How are we to know the truth about any one event if everything seems like a fog of illusions and lies? Do facts really exist in an era of multiple perspectives, mass-marketing campaigns, and master persuaders who easily spin narratives and manipulate us for their own gain?

When the difference between real and fake news cannot be discerned, when politics is a web of lies and spin, and when we have to assume that all videos and photos are doctored until proven otherwise, we live in a “Rashomon” world.

Released in 1950, “Rashomon” also deals directly with the aftermath of World War II. Kurosawa’s film, although set in a fairytale-like forest, indirectly comments on the ruins of the war and the cultural rot of years of war propaganda, mass death, and civilizational ruin. With his depiction of multiple conflicting stories, Kurosawa represents both Japan as a nation and about the war in general. He asks who was responsible for Japan’s loss in the war and how Japan can possibly recover from it, including from the fire-bombing of its major cities and the two devastating nuclear bombs detonated in Hiroshima and Nagasaki.

First-time viewers of “Rashomon” will focus on the four conflicting stories. As fascinating as their discrepancies are, I’d like you to pay close attention to the story’s framing scene, which takes place at a ruined castle gate. When the movie opens, it’s raining, with two men—a woodcutter and a priest—sitting together and lamenting the recent sorrows of their lives. Both have been present at the murder trial, and the woodcutter will be the last to offer his version of the terrible event in the forest. They will recount the other three stories as well, but those are in the past; the story’s present moment takes place at the ruined gate.

These two lowly men need someone to move the action forward; otherwise, they would just sit in sorrow at the gate, perhaps forever. What happens is remarkable: a beggar runs into the picture from off-screen, from where we the audience sit, and he gets the woodcutter and the priest to say why they are so dejected. His entrance jumpstarts the plot. As the four stories are told, the beggar laughs. He’s a mocker and cynic who, reasonably enough, thinks that everybody is a would-be thief and murderer at heart. The priest is offended by the beggar’s cynicism—he’s an optimist who hopes for the best in people—and yet he might be somewhat delusional because he witnessed first-hand the despair-inducing murder trial.

Near the movie’s end, the plot of the movie threatens to stall again. After the stories are told, the three men sit and lament the state of the world, which is full of lies, theft, fraud, rape, and murder. They seem no better off than when the movie began. Is history doomed to repeat itself, and is life nothing but a vale of tears?

But then someone else restarts the plot. When the rain stops and the sun comes out, an abandoned baby, hidden in a dark corner of the gate, begins to cry. What should the men do with it?

Kurosawa provokes us with the baby’s late entrance into the film, which always mystifies my students, who are all first-time viewers of the movie. You might think that “Rashomon” is about the four conflicting stories, and it is in part, but Kurosawa asks us what we can do with the fact that sometimes we really can’t know what the truth is. In other words, when we know that we are being manipulated, when we know that everyone is spinning facts to suit their interests and ideologies, when we know that deception and fraud are a key aspect of all political campaigns and marketing strategies, it can be impossible to act. Everyone seems to be a fraud; nothing seems fair or just. Why bother caring about anything?

What then should we do?

There are some obvious choices. Despair is one. Cynicism and selfishness, the beggar’s choice, is another. Parroting an ideology’s talking points, while giving up the search for richer truths, is yet a third choice. A fourth is becoming a politician or a marketer yourself, actively contributing to the cultural chaos of lies and deceit.

None of these is a good choice, according to Kurosawa. So he gives us a hungry, crying, orphaned baby.

The ending of “Rashomon” is a real wonder. It is encouraging and life-affirming. I won’t spoil it here, but watch Kurosawa’s camerawork shot-by-shot in the movie’s last five minutes. Deference, honor, and love are at the heart of his moral philosophy. He tells us that acting and speaking justly are as important as ever in a Rashomon world. He tells us there is nothing as important as the immediate social and moral problems right in front of us. Ignore them, or worse, exploit them, and you are choosing to be part of the lies and fraud that you yourself lament.

I can’t recall seeing a movie that actively involves us, the movie audience, in its drama as much as “Rashomon” does. The beggar walks into the picture from where we sit. The witnesses talk to us at the trial. And the woodcutter will walk out of the picture, back to where we sit. His is the last movement of the movie. He becomes one of us, a participating liar in a world of illusions, but also a man of humility, charity, virtue.

We are, Kurosawa tells us, in “Rashomon.” Its dilemma is our lives. What then should we do?

Pay attention to problems close by. They are there, waiting to be noticed and cared for.