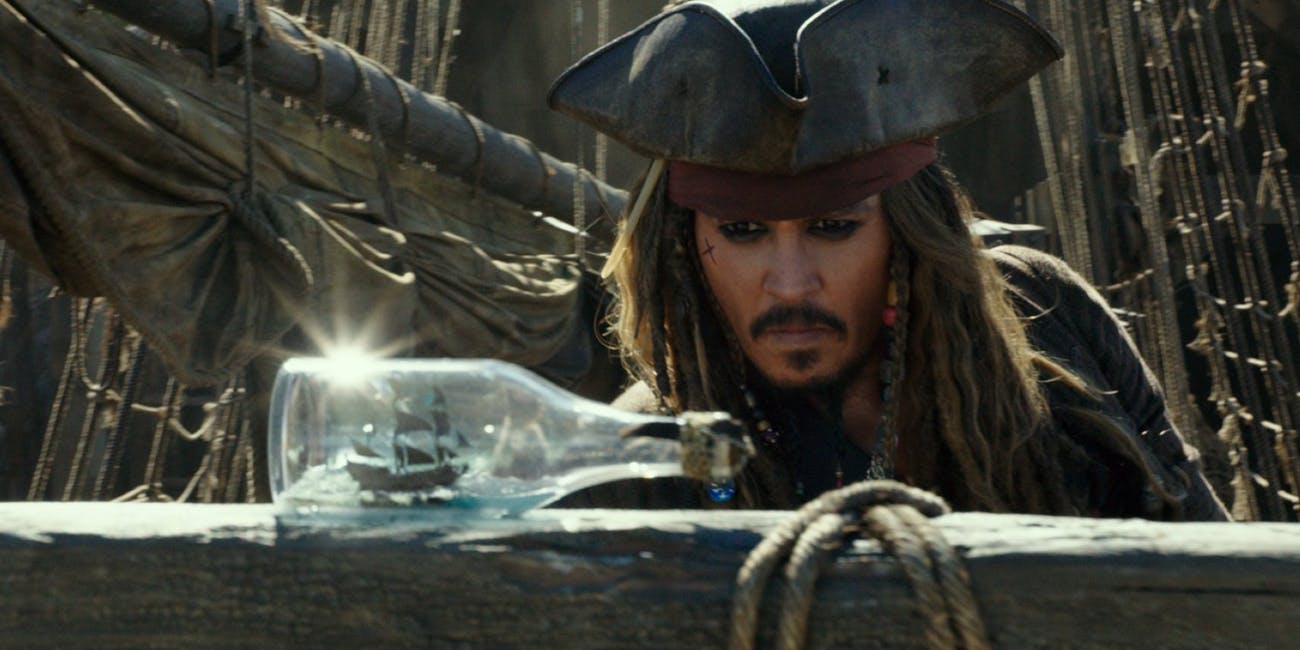 Pirates of the Caribbean: Dead Men Tell No Tales (2017)

I prefer my Pirates movies ridiculous.  This means that I’m in the tiny minority who prefer the second Pirates of the Caribbean movie to the first.  Keep this in mind as we go on, because we must discuss the fifth movie in this franchise, Pirates of the Caribbean: Dead Men Tell No Tales.  This title, which goes on several words too long, proves deceptive because this is at least the third Pirates movie featuring dead pirates who tell way too many tales.

Once again, Captain Jack Sparrow (Johnny Depp) faces a mortal enemy.  This time it’s Captain Salazar (Javier Bardem), a Spanish captain and pirate-hunter extraordinaire.  Long ago, Salazar was on the verge of eliminating all pirates from the world (Disney forbid!), but he was thwarted by a wily, young Jack Sparrow.  Somehow Salazar and his crew turn into the undead.  In the early part of this movie, they are released from their ocean prison to hunt and kill Jack Sparrow.

Sparrow, meanwhile, remains piratical by trying to rob banks.  When we meet him here, he’s drunk in a bank safe, which ends in his attempt to steal an entire bank building from the city of St. Martin.  When this plan fails, as stealing buildings usually does, Jack’s crew leaves him behind.  Captured by the British for his crime, Sparrow is about to die when he is rescued by Henry Turner, who is the son of the Orlando Bloom/Keira Knightly pair from earlier Pirate movies.  Turner needs Jack to find the Trident of Poseidon.  The Trident destroys all oceanic curses, you see, because that’s what Tridents of Poseidon always do.  Turner’s main motive is to overturn the curse on his father Will and his ship, the Flying Dutchman.

Along with Salazar and Turner, a third party pursues Sparrow.  That’s Captain Barbossa (Geoffrey Rush), whose fleet is being decimated by Captain Salazar’s ghost pirates.  Barbossa makes a deal with Salazar to hunt Sparrow together.  With one person hunting another, who’s hunting somebody else, eventually all characters are on their way to the Trident, whether they know it or not.

There’s your scorecard for this movie, but it remains incomplete without telling you that a female astronomer (Kaya Scodelario) who is unknowingly related to a key character is also hunting the Trident, and the British Navy is hunting everybody named above.  Through most of the movie, at least three storylines are converging during chases in which somebody wants somebody else in order to break a curse, find lost treasure, exact revenge, or rescue a loved one.

As I reread it, I think that that last sentence actually describes every moment of all five Pirates movies.

Anyway, as I said, this Pirates movie is just ridiculous enough for me to be watchable.  You ask what ridiculous enough means. In no particular order: ghost pirates, ghost sharks, witch chases, buildings dragged through streets, Galileo Galilei’s diary, and Galileo’s ruby, which is a key to unlocking the Trident.  Poseidon himself does not make an appearance, but Sir Paul McCartney does, proving that the Beatles are still greater than the Greek gods.

Depp and Rush are still kind of fun to watch as pirates, even though they could be members of AARP. Rush in particular hams it up, while Depp maintains his goofy effeteness while evading a rotating guillotine during a botched execution.  There are ample puns on words that don’t deserve them, such as as-tronomer.  You can imagine what Depp and his pirate friends say when a female tells him that she’s a horologist, with emphasis on the syllable “hor.”  Although some of the jokes fall flat, the audience in my theater cackled a lot at Depp’s antics, even though the horologist, as expected, slowly loses her clothing as the movie goes along.

Disney is going to make lots of money worldwide off of this fifth Pirates movie.  Its ending provides no sign that the franchise is over.  Given Johnny Depp’s financial woes and Disney’s lust for profits, I would bet on a sixth Pirates movie in the next three years.

Yet choosing this movie is like shopping in the junk-food aisle of your nearest grocery store.  This is fast-food film-making, with cheap doses of movie love, family reunions, and chase after chase after chase.  An occasional bag of Cheetos, or an occasional Pirates movie, is okay, I guess.  If your imagination is dining a lot on this kind of movie, it’s become Disney-fied, which is a serious medical condition that requires immediate treatment.

But if you need ridiculousness, look no further.