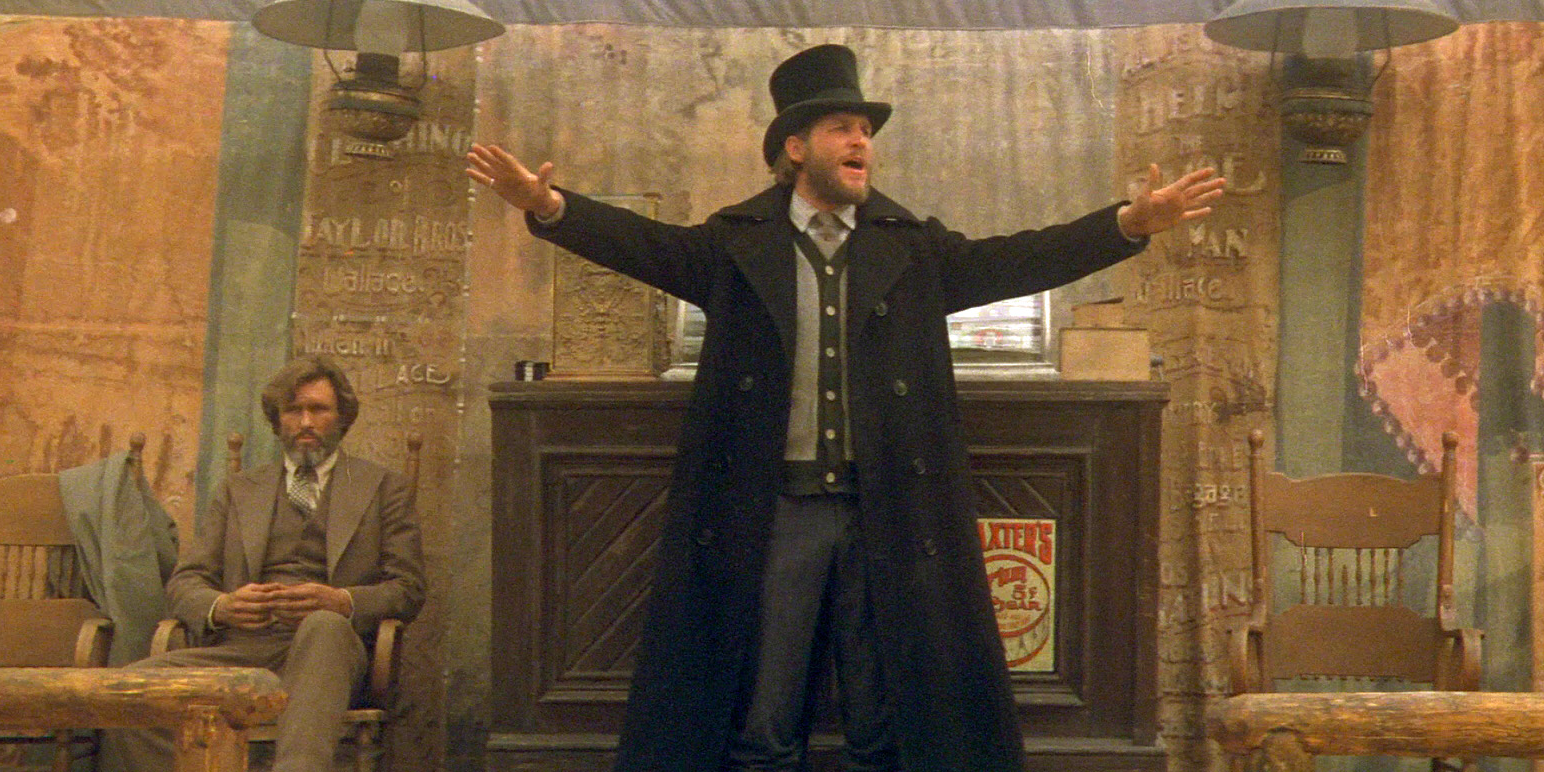 The goal for all viewers of a film, I think, is to find the right ways to watch it. Of course, not all movies are linear, obvious, beautiful, or clear. Probably the promise of Heaven’s Gate, that it would be a Hollywood master-epic, ruined its 1980 release. Viewer expectations have killed so many movie experiences; it’s better to be open to possibilities for new ways to watch a movie than to bring a narrow expectation that demands that a movie be what the viewer expects. Reading original Heaven’s Gate reviews, I think that viewers in 1980 brought the wrong spectacles and watched a different movie than I did.

This movie is neither flop nor masterpiece. To me, it’s a movie about the way it looks and sounds, yet mistakenly veering into character construction and linear plot trappings. That’s when it gets boring.

At first I thought this would be a movie about AMERICA. It begins at Harvard, with a college graduation. It then segues twenty years later to Wyoming, the settling of counties there mostly be immigrants, but also including a couple of the Harvard graduates. It contains noble prostitutes and evil cattle ranchers, classic Western types. The general plot is that county authorities are going to rustle up hundreds of immigrants and kill them. The Harvard guys, from what I can tell, see to be on the side of right.

If that were the movie, it would be so entirely stupid that calling it a flop would be too nice. Putting Harvard grads on the side of the underclass is quite a leap. Two men vying for the love of a “whore” is another dumb plotline, so underdone that a good edit of this would probably cut it out completely.

It’s sort of about America — the sentimentalism, beauty of the West, bread and circuses, Adam-and-Eve tropes, pleasant folk music, partying, wholesale murders papered over, steam engines, cockfighting. Anybody who says this is a “true” picture of the West, though, needs to read some history, as if county authorities could just wantonly kill huge numbers of immigrants without any federal or social redress.

The movie, I think, wants to be a visual and aural party. Most of the first half breaks out into a party, ignoring plot. Somebody else I read called these “disruptions.” I think they are accidents that give the movie some energy. The visual excitement at the Harvard dance and skating rink scenes, combined with the camera wandering around Casper, diving into the cockfight, then cutting to the wilderness and pleasant log-cabin living of the Kristofferson character.

Maybe the movie is about the world of its making, a visual cinematic tour of somebody’s idea of the American West. It’s a proto-open-world-video-game. Indeed, I enjoyed Red Dead Redemption 1 and 2 just to wander around those landscapes. I enjoyed this movie in the same way, for its dingy-lit interiors and sun-filled exteriors, its grime and glory. Nothing else really mattered, since the characters didn’t exist and the plot is lame.

The movie might best be described as what if Cimino did Terrence Malick except he was trying to satisfy Hollywood movie plots yet tinge everything with the grandiosity of an Italian cinematic epic. This kind of movie I’d recommend to almost no one. It’s not for anybody who is trying to watch a movie. It’s for somebody who wants an experience of moviemaking about the American West, which is how I approached it, and it was satisfactory enough. I still have no idea what, philosophically and ideologically, this movie is about. It’s not about that at all, maybe.

Be sure to read about the making of the movie, which sent me into a one-hour rabbit-hole of delight, and one could get lost for hours in that world, too.

Is the Soderbergh edit of this movie still available online? I bet that’s the one to really watch.