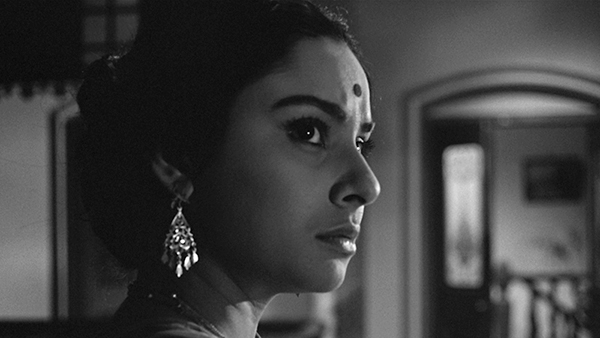 This affair-of-the-heart movie, by master Satyajit Ray, is a cut above similar movies. Ray’s compositions feature the usual complexity, but by the early 1960s he was mixing in subtle camera movements everywhere, those worthy of Bergman.

The story possesses simplicities you’ll find in most similar Hollywood fare. A well-to-do Indian wife, the Chara of the title, sits bored at her lovely home all day, while her politically involved husband runs his start-up newspaper. In an early conversation, he says that he doesn’t like the English term “idle rich,” and that he’ll show them, only he doesn’t notice that that’s the problem with his wife, who is so restless she a rear-window observer of the streets.

Along comes a 23-year-old bachelor, Chara’s cousin-in-law. He’s into singing and poetry. When he arrives, a storm literally blows through the house. Ah, the winds of passion!

Chara, as we expect, desires her cousin more as this movie proceeds. The movie splits up society into the husband — who is legal, political, and all too literal — with the cousin, who is romantic, artistic, carefree.

Westerners must remember that Chara is housebound by social norms, and she is also part of an arranged marriage that she cares little for. Her cousin is offered an arranged marriage as well, but he wants no part of that. The movie could be construed as attacking the social norms that keep women housebound, that force people to marry those whom they don’t love, and especially to prevent dreamers from indulging in aesthetic wonders. The movie’s stylistic flourishes promote Chara’s daydreaming (there’s a lovely montage at about 1:13:00) and the cousin’s art, via his singing and essay-writing.

Chara seems artistically gifted but also stifled. Where’s her outlet? Ray argues for that outlet for all, but especially for women.

This could’ve been a propaganda movie with those basic messages, perhaps novel to Bengali movies in the 1960s, but all-pervasive ideas as of 2020. But Ray is great — the scene on the swingset, the daydream montage, all of those camera moves, the great set, and on and on. Those overcome what for me is an ordinary enough story.

I’ll note that the husband wishes Bengali culture to be free from the English rule of the country, the movie taking place in the 1890s. And yet Chara dreams of being an autonomous woman. Perhaps she’s the real one who wants freedom, or perhaps she is imitating the individualistic norms of Western culture? It’s probably not either/or but instead both/and!

Or maybe this movie has another priority: stop making everything about politics, which swamps and denigrates and kills the arts. I suspect that Ray was a bit tired of the overly-political minded in his own time, and he identifies a tiny bit with the two artistic characters here.