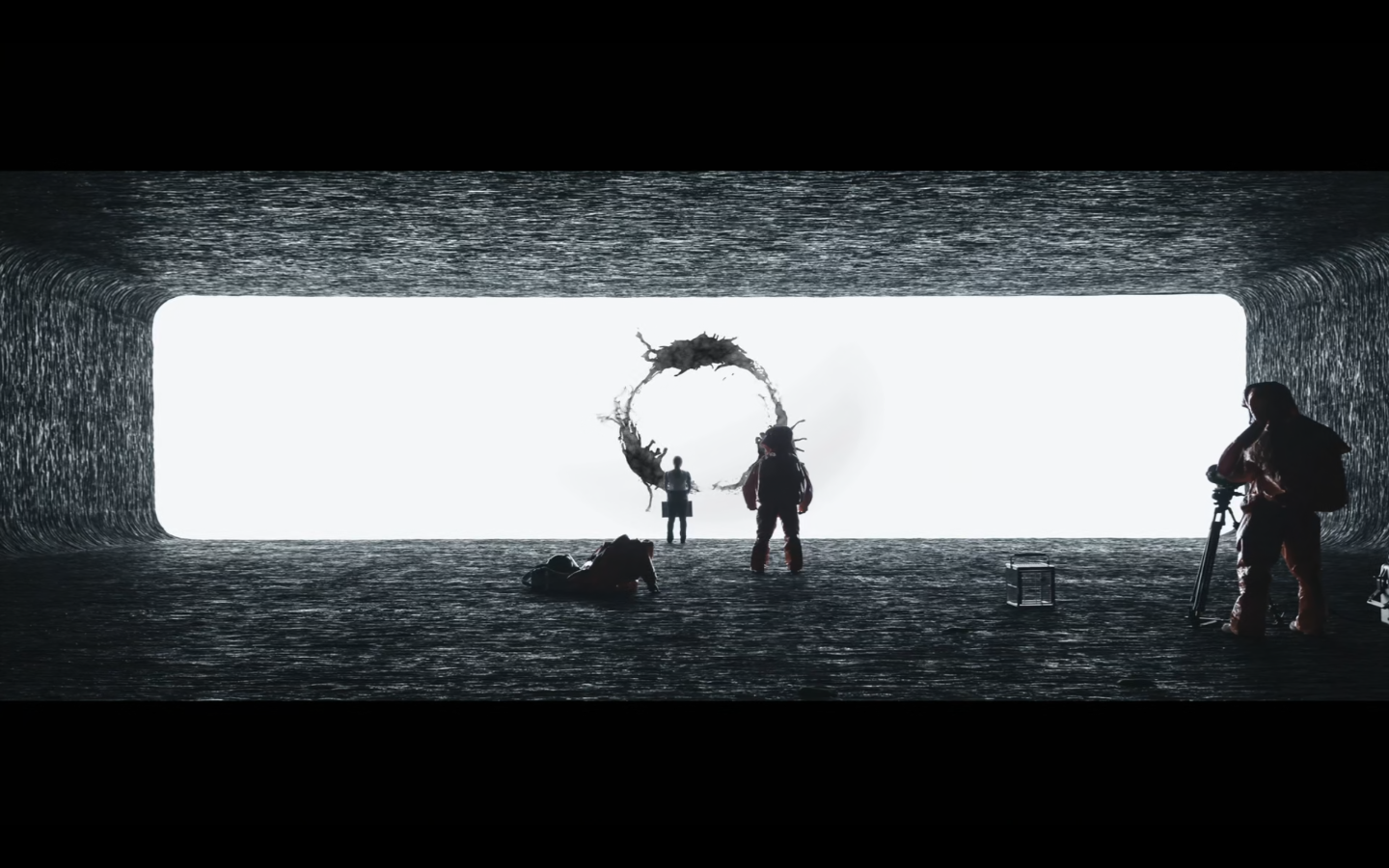 from The Four Quartets

Arrival is another multi-million dollar spectacle aimed at mass audiences worldwide, it tries to infuse its first-contact scenario with cognitive and mystical problems that challenge moviegoers who might want only to be entertained. Those problems rest, unavoidably, on theological and philosophical assumptions about human life itself. Arrival’s assumptions aren’t satisfying upon inspection, although you might at least find the movie more thought-provoking than standard Hollywood fare.

The first obvious, heady statement that Arrival makes is that first-contact—our initial meeting with intelligent alien life—will be a slow-going affair. We won’t be able to talk or write to aliens, whose language and culture will look nearly impenetrable to us when we meet them. That’s why, in Arrival, the US military employs an ingenious linguistics professor, Dr. Louise Banks, to decipher the alien language.

Banks is teamed with Ian Donnelly, a theoretical physicist. Although he would like to learn the advanced mathematics of space travel from the newly arrived aliens, Donnelly is rebuked by Banks early on, who tells him that, before anything else, we just need to learn to communicate with them. Arrival’s first act proceeds much more slowly than other first-contact stories you’ve seen—it’s more Close Encounters of the Third Kind than The Day Earth Stood Still—in part because it does not assume that communication with aliens is very easy. Learning the alien language and interpreting it is the second-greatest challenge for humans.

The greatest challenge may just be getting along and sharing information with each other. When the aliens land on Earth in Arrival, they land in twelve different spots with twelve different ships. This means that several countries—including the US, Russia, China, and Australia—each have their own contact moments. The countries coordinate with each other at first, but then paranoia and threats of violence hinder and nearly shut down diplomacy and the sharing of scientific knowledge. Arrival would like to say that we are more alien to each other, at times, than to aliens themselves—a point made by countless SF stories about alien-human relations. Thankfully, Banks’ preference for the nuances of language and open-ended interpretation combat militaristic paranoia. This is perhaps the movie’s greatest hope.

Arrival quotes liberally from the most influential of all SF movies, 2001: A Space Odyssey (1968). But the surprise is that it also quotes, and even seems to prefer, a more recent rebuke to 2001: Terrence Malick’s The Tree of Life (2011). At first, the alien ships resemble a much more massive, egg-shaped version of the mysterious black monolith of 2001. When the scientists first approach the aliens, we see an endless black tunnel and hear nothing but their breaths in their oxygenated suits. The scene of initial contact is nearly ripped from the second act of 2001, in which human scientists find the monolith on the moon. Initially, Arrival seems to agree with Kubrick’s bleaker, anti-human vision of the cosmos, before we realize that it is veering in another direction.

That direction is completely informed by Malick’s work. In The Tree of Life, a story about the beginning and ending of the cosmos and its meaning for a particular Texas family in the 1950s, Malick’s ever-moving camera shows us fragmented glimpses of domestic bliss and heartache. Malick foregrounds the very particular, the local family in a brief moment in time, as something very significant even within a massive cosmos in terms of time and space.

Arrival uses the film grammar of Malick—moving-camera close-up shots of Banks playing with her daughter, of that daughter running in fields and playing by water—to show the particular worth of a personal story, even within the one of the most significant moments in human history (i.e., first contact with aliens). Although Banks is at first like all of us—an insignificant individual who is just a bystander to a grand event—her particular story is key to the entire first-contact scenario. The story of Banks and her daughter matter, unlike the de-humanized characters in 2001, who are engulfed by the cosmos and by eons of time. Banks’ example means that, if other seemingly insignificant people understand the alien language in Arrival, their little stories will matter mightily, too.

Still, Arrival is plagued by a couple of major problems. It asks us to believe that worldwide unity, maybe even global peace, is threatened by crazy Christian Pentecostals and Chinese aggression fueled by isolationism. As well, there is a rather silly moment in which a US soldier, directly influenced by conservative radio host, becomes imprudently violent. While trying to unifying the world, Arrival divides.

But Arrival’s greater problem is philosophical short-sightedness. It doesn’t pay much attention to the long, rich tradition of first-contact stories, particular those of the great Polish writer Stanislaw Lem.1 Although Arrival’s preference for the problems of linguistic interpretation and the act of communication itself are also Lem’s, Arrival makes the quick assumption in its second act that whipsmart US scientists can decode alien language rather quickly. That means that aliens are just anthropocentric, as aliens in most SF normally are, even though these aliens are seven-legged, squid-like giants.

Yet in Lem’s best work, written over fifty years before Arrival’s release, he wonders if humans can ever understand the truly alien—if we are, in fact, incapable of grasping anything beyond a human perspective unless the alien itself can become human-like. Lem’s great novel Solaris, for example, is about a sentient planet that communicates with humans by recreating their memories. But the humans in that book ultimately never learn why the planet is doing this, or what it is saying by doing it. Perhaps the planet is defending itself, or giving them a gift, or playing with them like a child, or just doing what non-intelligent animals do instinctually. The point is that we humans can never know because we cannot inhabit the alien planet’s perspective.

Lem’s masterpiece, His Master’s Voice, is about the same kind of problem: humans receive an intelligent message from the stars, but decoding it is impossible because of the complexity and uncertainty of interpreting a wholly other, non-human language. For Lem, science breaks down when it tries to go beyond a human perspective, because it is developed within a human perspective that is built on unavoidable philosophical and theological assumptions about human nature and cognition.

But Arrival says that we can figure out an intelligent alien language and that, assuming the truth of the Sapir-Worff hypothesis, the alien language itself can re-wire our brains. By doing so, the aliens give us a gift, which is mistakenly interpreted as a “weapon” in the movie. Their gift is a new revelation, one that allows us to embrace the tragic vision of suffering with a stoic resignation. The alien language helps us accept our fate, even if that fate means knowing that we will suffer in the future.

The theological problem with Arrival, then, is a seeming lack of the Christian virtue of hope. We might gain much from learning the alien language, even the secrets of time and our destinies, but the lone assurance we have is that the future exists for us until it does not. Arrival’s quotations from Malick’s The Tree of Life are misinterpretations, then, because The Tree of Life affirms the eternal in the temporal and the cosmic in the local. The Tree of Life’s vision is comic, that all will be well and all manner of thing shall be well beyond death—beyond divorce and even tragic death, two things that Arrival never gets past.

In that way, The Tree of Life is more Augustinian—think Augustine’s Confessions—whereas Arrival reminds me a bit of the great Roman stoics, including Cicero and Seneca, albeit feminized nicely by the character of Louise Banks. As profound as they are, they help us deal with our fate, and no more. I still prefer Malick’s vision, which seeped a bit into Arrival’s narrative rival, Christopher Nolan’s Interstellar (2014). That movie has its problems, too, but the personal story in it is wrapped up in a love and hope that persists beyond the ending.

Arrival, meanwhile, ends where it begins. That return to a beginning seems like a sign of the Ouroboros rather an acknowledgement of the Alpha and Omega. Perhaps the aliens will return and tell me differently, assuming that I can understand them?