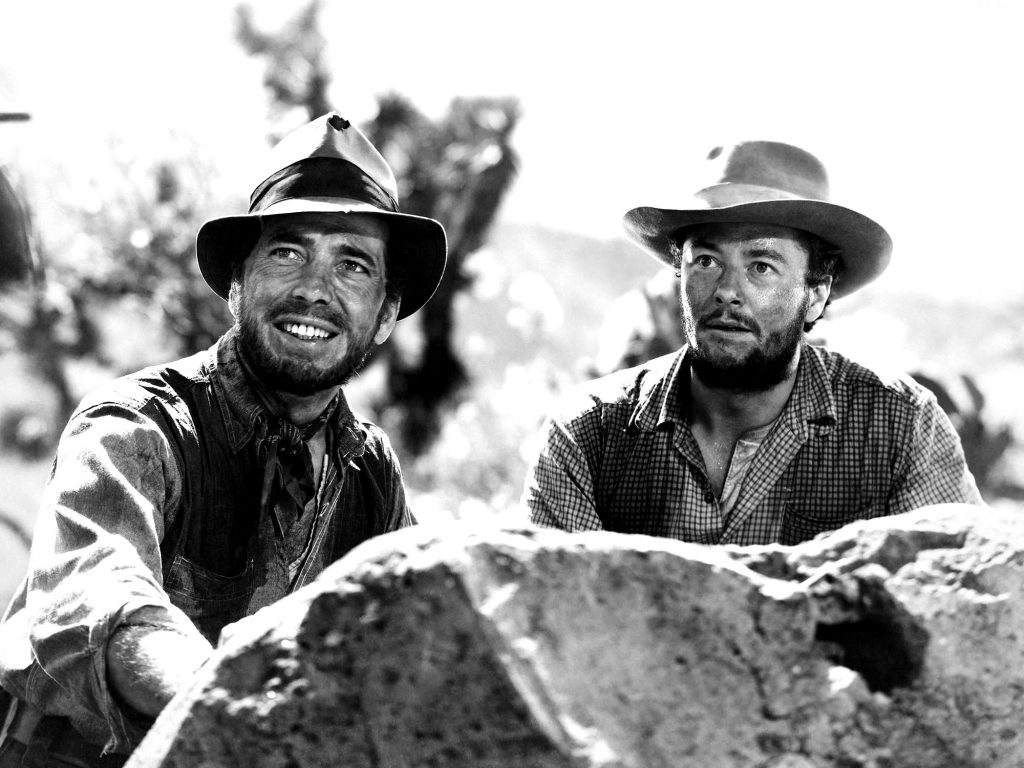 Treasure of the Sierra Madre

Watched at age 22, now watched again at 40, and it makes more sense now.

I had remembered this as a simple fable about the dangers of money. Greed changes a man for the worse, so says this movie. That sentiment is everywhere in these period Westerns, western noirs, crime films, right on down to the 2019 Oscar winner “Parasite.”

Okay, but now I see it’s more complex than that, much more. The ending (no spoilers) laughs in the face of the giant forces that give or take away wealth, the old “wheel of fortune” idea from Boethius and beyond. Not every character is corrupted by wealth, or the gold found on the mother mountain in Mexico. Money only corrupts some, and those whom it corrupts probably were primed somehow for that. That complicates our moral fable.

It’s a three-gringoes-in-Mexico film that has a LOT of untranslated Spanish, including plenty of full shots of Mexicans, including one late of a young boy. Those who respect the local place and culture in the movie succeed to an extent. There’s a quiet moment in the middle, when after the men find their gold, the crazy old prospector says they must take a week to clean up. He’s into ecology long before it’s a formal thing. Again, the Dobbs character is clueless about this, failing to respect the landscape at all. (Consider his foolishness about the heat and misuse of water and his recklessness in nearly getting bitten by a gila monster.)

The movie sort of argues against a low-trust society with a medium dose of paranoia, which Dobbs falls into as the movie progresses. Yet, okay, low trust is the proper order of nature — the bandits, the gila, the cave-in, the heat, the kid who nearly drowns, the duststorms. What has to happen, I suppose, is that the Robinson Crusoe fantasy of one-man-takes-all has to be ditched for some cooperation, to combat the elements and the monsters. That’s what the three men, mining the mountain, have to figure out. They nearly do, and the Lockean theory of property is upheld (in my view). That’s over and against the Marxist theory of labor-value, which the prospector espouses. The movie I think ends more ala Ecclesiastes than Marx: all is a chasing after the wind, vanity of vanities, saith the preacher. Yet, they nearly do get the gold that nature gives. It was worth the effort.

Only Dobbs is the ultra-individualist who can’t ditch his extremism, which leads to paranoia beyond measure. Maybe he’s got some kind of disorder; after all, near the beginning, he’s robbed and then assaulted by the psychopathic oil-derrick builder.

He’s not a picture of Humanity, though. You’ve got the wiser prospector, the younger partner who learns over time and acts virtuously, the villagers who understand the reciprocity principle, and the wider world of Mexico (sans bandits) that’s civilized. So I don’t see this movie as a negative ending — I think Ebert argues that somewhere — but an argument for the necessity of the social and ecological aspects of life not to be ignored but to be, as the title puts it, treasured above wealth.