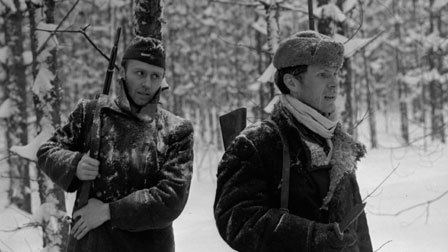 By Josh MatthewsDecember 19, 2020No Comments

Larisa Shepitko’s “The Ascent,” intentionally or not, is an anti-Hollywood movie, much as say Tarkovsky’s “Solaris” is just that. Both feature the Russian actor Anatoliy Solonitsyn, who has a great face, and who played Andrei Rublev in the film of the same name, a Russian artist who is the anti-Renaissance figure.

I use “anti” several times there. Probably there are more ways to see this movie. “The Ascent” is an anti-ascent as well, unless you count the ascent as a sick ironic joke, a bit of Russian humor, where your whole life leads up to the final ascent, which is the gallows.

The two Russian soldiers in this movie, sent on a mission to retrieve food for a small group of people running from the Nazis during the winter of probably 1943 or so, these two are in an anti-buddy road trip story. They run into all of the great forces that Doom Mankind: first other men, second is circumstance, third is nature, and the fourth is other men. The snow scenes are golden, in a technical sense, when Shepitko uses handheld camera and close shots galore, of the men, supposedly ascending, crawling around in the snow to avoid the Nazis who hunt them.

Much later — and spoilers come — they are captured. The second half of the movie features their captivity, including torture and harsh imprisonment. The centerpiece of the movie, in the dead middle, is a conversation between each of the men and the head interrogator, played by Solonitsyn. If anybody is looking for secret anti-Soviet messages, this might be your scene, as the movie seemingly has allusions to gulag-type stories popularized not long before this by Solzenitsyn.

Betrayal comes, between the two men. Here the ascent once again is an anti-ascent. I don’t know if Shepitko had Dante in mind, but betrayal, featured in “Inferno,” is at the very bottom of hell in a frozen wasteland. Well, that’s the scenery of this movie. Perhaps the betrayer is ascending to the bottom of the pit of his own consciousness, which is one of the ideas in the final scenes.

I watch this during the winter in the mid-northern hemisphere. This is a bad atmosphere for such a movie, when it’s cold and dark out for months. Fortunately, snow is not on the ground here for months, as it often is in the winter. Bleakness, in these moments, is not preferred. “The Ascent” is as bleak as it gets — a movie about soldiers wallowing, struggling, being tortured, betraying each other, and failing in everything. As I said, that’s the opposite of the Hollywood WW2 movie narrative, mostly.