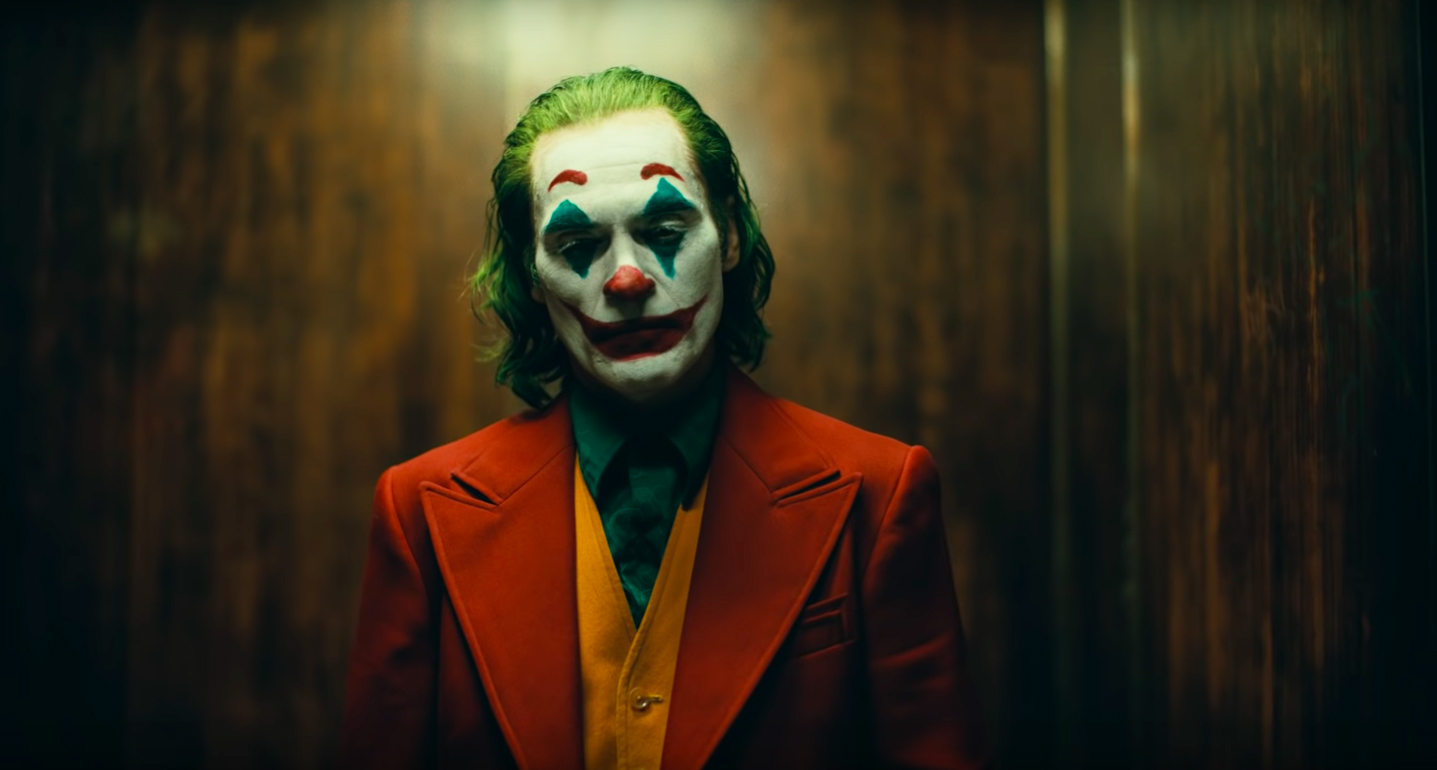 By Josh MatthewsOctober 4, 2019No Comments

Todd Phillip’s Joker opens this weekend with plenty of national anxiety, thanks to media hype.  At my theater, a police officer—to put it in the words of the theater owner I spoke to—“made his presence known” by looking in on our screening.  This is the first time ever that a cop has been needed at a movie in our town, a small Midwestern blip-on-the-map where it’s possible that no murders have ever been committed.

We’re putting cops in theaters this weekend because we’re worried that somebody’s going to shoot up a theater in America, maybe because the last time somebody did it, it was at a Batman movie. That was seven years ago (i.e., the 2012 Aurora, Colorado shooting at The Dark Knight Rises), but bad memories don’t die.

Or maybe they do, because just two months ago, when two mass-shootings happened in one day—at Dayton, Ohio and El Paso, Texas—it felt like nearly every legislative body would be banning automatic assault weapons immediately.

But they didn’t, and we’re back to normal, which means that the people who love guns the most in America—namely the left-leaning Hollywood movie studios—get to promote their next movie featuring an imitatible, gun-toting lunatic.

But how’s Joker? It’s a flawed, sometimes entertaining movie that’s not concerned about real life so much as it is about syncing up with the fictional Batman universe.

Although one major critic has called Joker “pernicious garbage” because of its supposed social commentary on the real world, it doesn’t have too much of that, except the typical, generic boilerplate of comic-book-movie fare.

The movie is more interested in telling you the origin story of Arthur Fleck, not by making you so crazy that you’ll be hypnotized to do deranged things, but by referencing older movies and songs, such as Charlie Chaplin’s Modern Times, Billy Wilder’s Ace in the Hole,Frank Sinatra’s Send in the Clowns, and anything by Martin Scorsese.

During Joker, Fleck (Joaquin Phoenix) becomes the psychotic villain known as the Joker, one of several arch-nemeses of Batman, who is a leading contender for the title of Greatest American Superhero.

Since the Joker is always trying to destroy Gotham City, which is usually representative of order and civilization, the story in the movie is about how Gotham begins to face the haunting menace of the Joker and his army of clown-faced henchmen, prior to Bruce Wayne becoming Batman.

Importantly, the movie is only tangential to our reality. Joker takes place in an alternative 1970s universe, where the walls are wood-paneled and the TV screens are small.  In this world, Arthur Fleck works for a rent-a-clown business.  He gets harassed by two different gangs in the movie, one a typical thuggish gang and another one consisting of three white men in suits, who each look like a young Tim Kavanaugh.

Because Arthur is bullied, because the city’s welfare programs are being cut, and because he’s mocked on national TV by a famous comedian named Murray Franklin (Robert DeNiro), Fleck starts to go crazy.

Well, no, maybe he was already crazy. In what I’ve just described, the movie seems left-wing, given its emphases on social conditions as causes for the Joker’s crimes.  And when Fleck says something late in the movie about his mental-health program getting cut, it would seem that this is the movie’s political perspective.

But this is the Batman universe, which is really right-wing.  And so Joker is, in trying to line up with this universe, a right-wing-ish sort of movie. (E.g., it believes that crime is inescapable and sometimes un-reformable, that force must be used to thwart wicked people, and that order is preferable the kinds of eccentricities that lead to chaos.)

There are lots of possible main causes for Fleck’s insanity, but the number-one cause for the Joker’s emergence, according to this movie, is that Fleck was abused by his mother who adopted him.  She was deranged, beating him so badly that he got brain-damage.  That apparently causes Fleck to laugh uncontrollably, a syndrome that he even has a medical card for, to show to strangers who think that his laughing is just rude.  (The Internet tells me that this spontaneous laughing syndrome is real. It’s called “Pseudobulbar Affect,” and it is caused by brain damage.)

Fleck isn’t aware of his mother’s abusive past, and so he’s in search for his absent father throughout the movie.  The point here is really strong and unavoidable: the Joker is a psycho because of a horrific family life and an absentee father. Yes, this movie actually emphasizes that one of the major social problems that causes people to do unspeakable things is . . . the lack of family values!

Then there’s the clown-faced army that forms in the movie. They have an economic movement that’s called, not very subtly, “Kill the Rich.”  This mob of people wears clown masks, they scream in protest at Gotham’s city hall and, eventually, they kill police officers who are seeking justice for Fleck’s murders.  While Fleck says he’s entirely apolitical, he’s the perfect nihilistic hero for these destructive revolutionaries.  And, I gotta say, the guys wearing clown faces look and act a lot like the American masked bandits now calling themselves “Antifa.”

Anybody who’s watched Christopher Nolan’s Batman trilogy, or who has read any of the comic books, including Frank Miller’s graphic novel The Dark Knight Returns, will be surprised by nothing in this movie.  Joker’s violence is expected. Its depiction of a crazy man who becomes a psychotic killer has been typical in Batman fare for eighty years.

The question, then, is whether anybody will imitate Joaquin Phoenix’s performance as Joker and do something loony in real life.  But, to cover itself, the movie presents us with a kitchen-sink of possible problems that could cause such an event: rude friends, social isolation, poor economic conditions, a rundown city filled with trash and rats, elite rich people who don’t care about the poor, absentee fathers, abusive mothers, and psychiatric drugs.

Basically, the movie says, if you imitate the Joker’s actions in this movie, you yourself are a crazy criminal deserving the scorn of good citizens and punishment from a legit justice system.

I recommend this movie to nobody because, for one thing it doesn’t come close to the excellence of Nolan’s trilogy.  At times it strives to imitate Nolan, but because it has only one storyline, it’s too slow and ponderous to properly copy its better predecessors in the Batman film-universe.

As well, there’s plenty of stupid moments in the movie. One of them is crucial to the plot: Fleck receives his first handgun from a fellow employee, who gives it to him as a gift.  Not only is Fleck a weirdo that nobody would ever give a gun to, but when, in the history of the world, has one near-minimum-wage co-worker gifted a fellow co-worker with a handgun?  The odds are that this number is closer to zero than it is to, say, three.

As for the media circus surrounding this movie, Joker doesn’t live up to those expectations at all.

Thus we didn’t need a police officer at our theater. Everybody went home, people seemed civil afterwards, and nothing came of the screening.  If nothing happens, I doubt that anybody will remember this movie in a month.