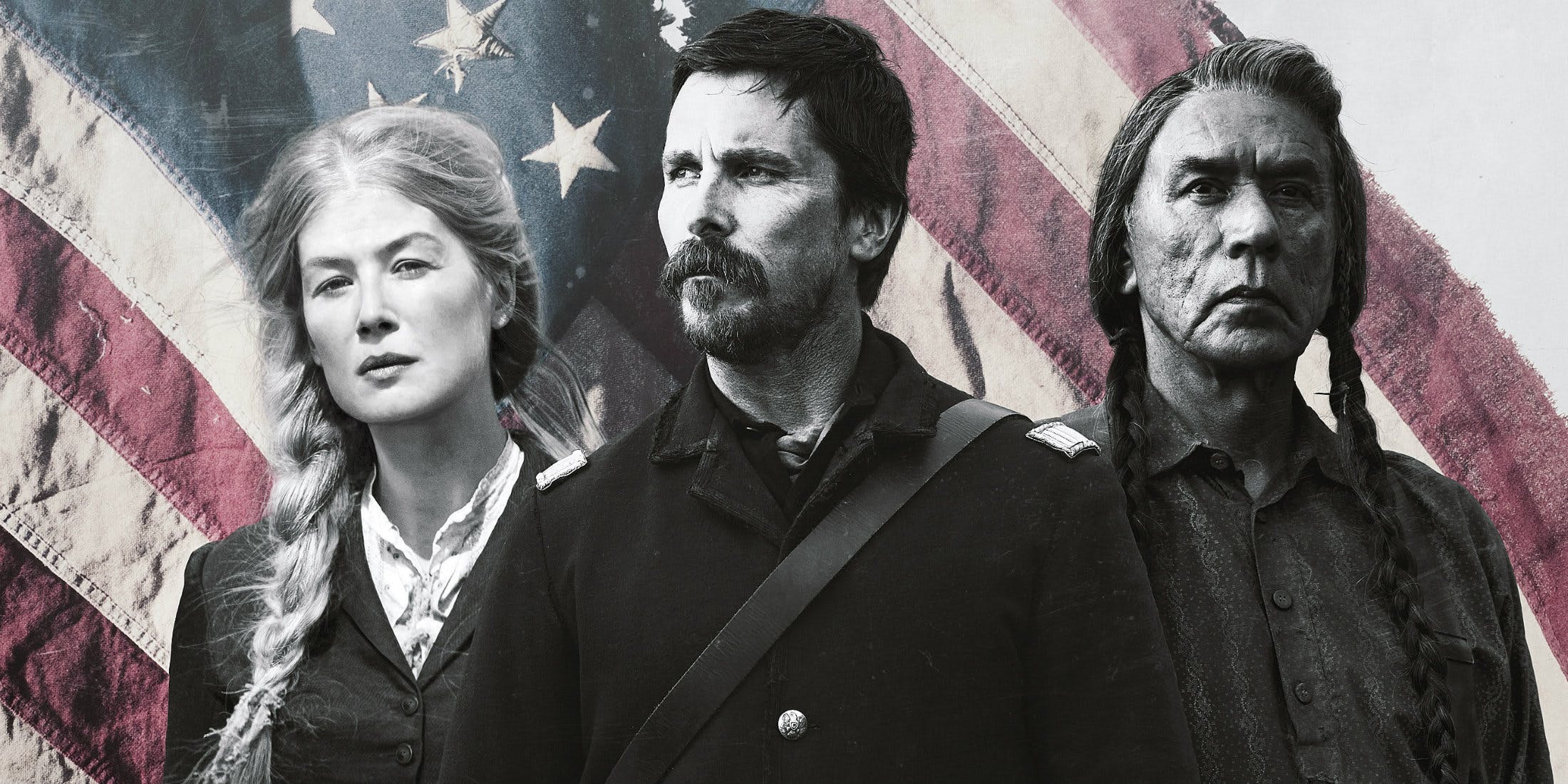 After one viewing of “Hostiles,” anyone might append those qualities to Lawrence’s famous quote, which is the epigraph of the movie.

“Hostiles” is a classical Western in search of the essential American soul, in a time where that “soul” seems fragmented and irreconcilably divided. By “American,” this movie certainly means rugged and western.

The movie unloads the unbearable weight of the late-nineteenth-century Indian wars onto viewers. It is at once a heavy, traumatic, and just plain difficult experience. You must be well prepared for its somber notes; many viewers may not be able to abide them.

I don’t mean that this movie is cruel or excessively violent. It just deals thoroughly with people who have done little except suffer and cause suffering.

Its central character, Captain Joseph Blocker (Christian Bale), is a veteran of the Indian Wars, in which he has lost good friends to the worst kinds of murder, but has also murdered in those same ways.

Blocker must lead a small group of soldiers and Indians from New Mexico to Montana, circa 1892. The Indians have been prisoners for seven years, and they are Blocker’s mortal enemies. The journey must be undertaken because one of the Indians, Chief Yellowhawk (Wes Studi), is a cause célèbre in Washington D.C. Politicians have ordered Yellowhawk’s transport back to his native land in Montana, the Valley of the Bears, because the chief is dying of cancer. For this act, the politicians will get good publicity and flattering praise.

Meanwhile, Blocker will only get trouble. He and Yellowhawk have fought against each other in various skirmishes, raids, and massacres. Blocker and his soldiers are Indian-killers, while Yellowhawk is a killer of whites. At first, Blocker refuses to take the mission. He accepts only when his commanding officer threatens to take away his pension.

Lots of clichés could have been possible at this early point in the movie. Over the course of the journey, we expect Blocker to learn to love Indians, and vice versa. “Hostiles” is also a sort of “one last mission” movie for Blocker and his men.

However, without offering serious plot twists or complications, “Hostiles” walks delicately around these clichés. It is a beautifully shot, almost mesmerizing movie (thanks to director Scott Cooper and cinematographer Masanobu Takayanagi).

Part of its excellence, including its lack of trite offerings of familiar stereotypes, is its near complete lack of sentimentality. All of the characters are serious sufferers of multiple atrocities, and we feel that the movie earns the emotional weight it gives to them.

Bale’s performance, and really the rest of the cast’s, keeps the plot from feeling overly simplistic. Bale masterfully portrays Blocker as a war veteran, a hater, a tough man, stoic yet compassionate, a reader of Julius Caesar and the Bible, a doubter but maybe a Christian, and a man who wants to be meeker. This is one of the best performances of his career.

He is accompanied by Rosamund Pike’s remarkable turn as Rosalie Quaid, a frontier woman whose entire family is murdered by Comanche horse-thieves.

Early in the movie, Blocker’s party finds Quaid holding her dead baby in her burned-down house. She is so traumatized that Blocker must call upon his vast war experience to play therapist and comforter. Somehow he has to take her, a woman whose family was killed by Indians, along with the Indians he’s transporting. This requires ample patience and tact.

And then there are the Cheyenne, led by Studi’s character. They find empathy for Quaid, somehow, perhaps because they too have suffered as horribly as she has. The plot necessarily requires that the whites and the Indians reconcile somewhat. They do, but for reasons that make sense. We realize that the movie’s commentary on “the essential American soul” has as much to do with Indians as it does the whites.

“Hostiles” echoes some of Sam Peckinpah, some of Sergio Leone, and almost all of John Ford, especially key parts of “The Searchers.” It begins by replicating the homestead raid with which “The Searchers” begins. The plot of “Hostiles” simulates what it might have been like for Ethan Edwards, the main character in “The Searchers,” to escort the Comanche chief Scar on a thousand-mile journey, with orders not to harm or kill him.

This scenario creates massive tension, allowing the movie to offer an engaging psychological exploration of Blocker. He has to escort his enemies, while caring for a victim of his enemies, and while facing repeated encounters with hordes of thieves and murderers.

The title of “Hostiles” alludes not only to Blocker versus Yellowhawk, but also to the waves of hostile encounters that Blocker and Yellowhawk face together—including Comanche raiders, mountain men, and gun-slinging ranchers.

Blocker faces these hardships with increasing maturity. He develops his own understanding of Aeneas’ lachrimae rerum, which comes through indirectly from his repeated reading of Julius Caesar’s Gallic War.

Yet, I note a tinge of hopefulness in spots, especially when Quaid tells Blocker that the Lord’s presence can be felt and discerned, even through the tragedies they’ve endured. Although it is ambiguous, Blocker might also believe that.

“Hostiles” is part of a wave of suffering-middle-aged-man movies in the decade of the 2010s. It reminds me a bit of those kinds of movies from 2017—“Logan,” “Manchester by the Sea,” “Blade Runner 2049,” “Silence,” and the modern western “Wind River.”

What is going on nowadays that might be causing the creation and release of all these movies that have been made recently, with world-weary white-male protagonists who endure extreme hardship?

I believe that “Hostiles” is a great movie, although I can imagine that no one else but middle-aged men like me would think so. It tries to dig into an aging soul that is becoming hard, isolate, and stoic, and yet wants to remain empathetic and humane.

The movie seems to me, fundamentally, not about being American. Instead, it is a more universal psychological problem that “Hostiles” confronts. This is a world of very serious suffering, which we ourselves have contributed to in great amounts. So, how will we confront that fact?