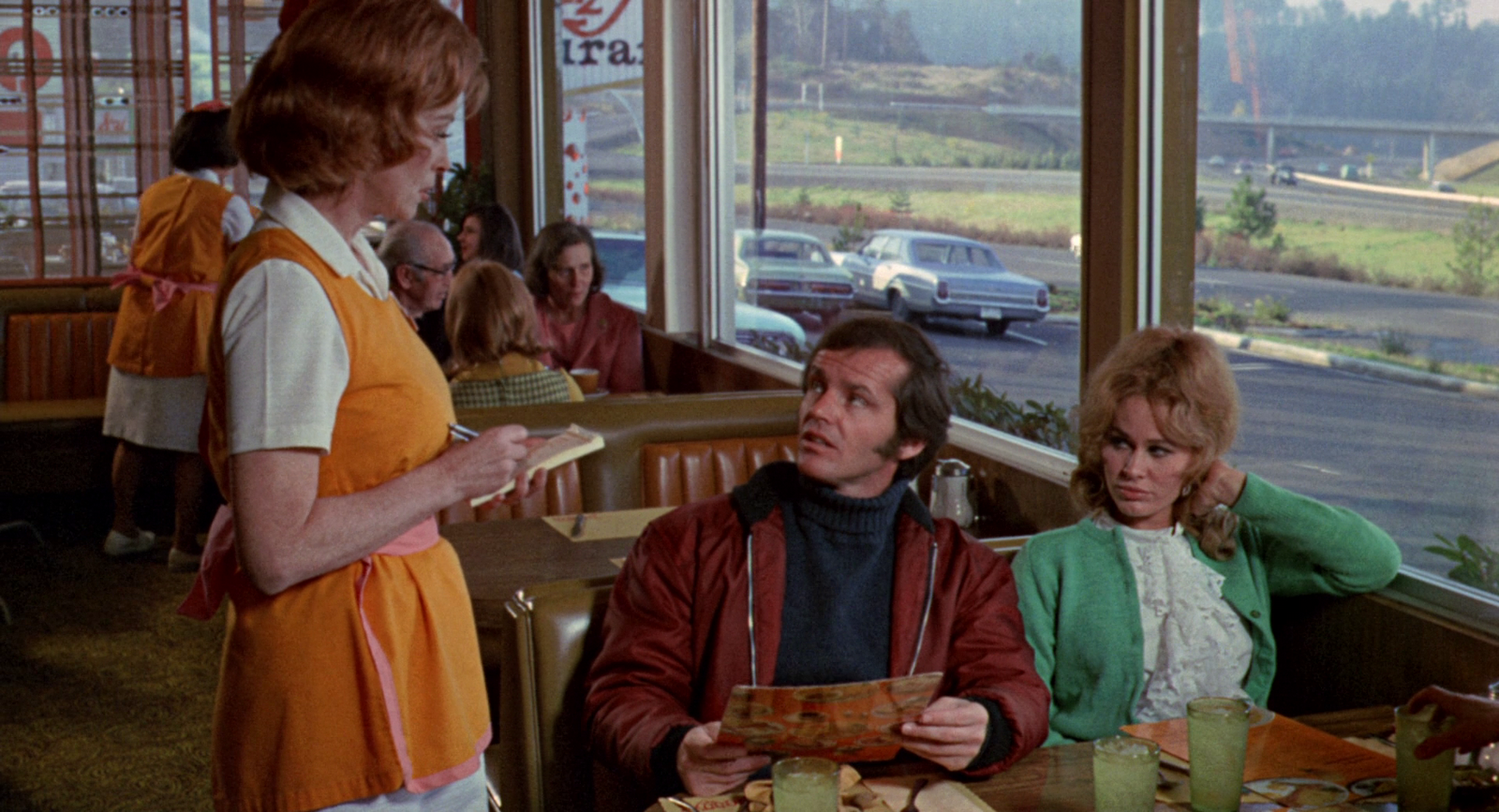 By Josh MatthewsDecember 21, 2020No Comments

American drifter movies, by 1970, were a dime a dozen, as they had been in literature forever. Somehow “Five Easy Pieces” stands out, probably because it is an epic as much as lyric. The textures are almost all lyrical, a personal search for emotion via a character who claims, as he plays classical piano, that he feels no emotion.

The “epic” nature of this is a man drifting towards adventure, returning home, and drifting back out towards adventure. It’s anti-epic, though, in that the main character has responsibility to no one, or shirks it. His father, the figure to whom he quests, is catatonic and thus unresponsive.

The main character drifts between two Americas that demonstrate a class divide that has severely widened. The rural-ish South, where he works in the oilfields and which he at one point labels “cracker ass,” versus the higher-class West coastal clan which he hails from. They’ve taught him the finer things of civilization, including a great training in classical piano, which he forsakes for the oilfields and Rayette, his lower-class waitress babe whom he cheats on and treats harshly, repeatedly, despite her gorgeous singing voice which he surely appreciates but shows little emotion towards.

Where does he fit? Nowhere. And he’s “nobody,” the alter-ego name for the epic hero. Like Huck Finn, he can’t stand domesticity, of either class, and so he lights out for the territory. It’s more Jack London-ish, though, as he goes to the northern land where it’s frozen (the movie’s last lines). Note that the movie mentions the Alaskan journey in the middle, with the hitch-hikers.

Why is he this way? There lies the mystery. I love how the movie approaches the characters as we approach humans in real life — they are distant, masked, and mysterious. They can be for years or decades. We slowly, over time, discover pieces of them. Sometimes, if we get enough pieces, we might put a few together. Usually, though, the puzzles of their lives are left so incomplete that it’s hard to see the picture at all. This is a Citizen-Kane borrowed metaphor that the movie employs, but the catch is not with actual puzzle pieces, but “pieces” of music, hence the title. And getting glimpses of the main character and his past life through those pieces is fascinating, leaving us to guess why and how things are the way they are.

That image of the main character playing piano in a traffic jam, then drifting off with the truck. There are so many of these in this movie, it’s pure visual poetry throughout.

I see some commenter here say that she can’t understand movies about white-male ennui. Um, okay. How about anybody’s ennui, discontentment, uncertainty about anything? The movie articulates it without championing it. When the main character comes home, we hear Tammy Wynette sing “sometimes it’s hard to be a woman.” Who is this movie about? It’s Rayette’s movie almost as much as it is Bob Eroica’s.

As well, the movie is describing an American feeling and American type, and as such it’s a warning — you get enough males like this, your society is adrift. Better to have a bunch of George Baileys than Bob Eroicas, but by 1970, you got a lot of Bobs running around. Get ready for the Me Decade, and more of that after that.