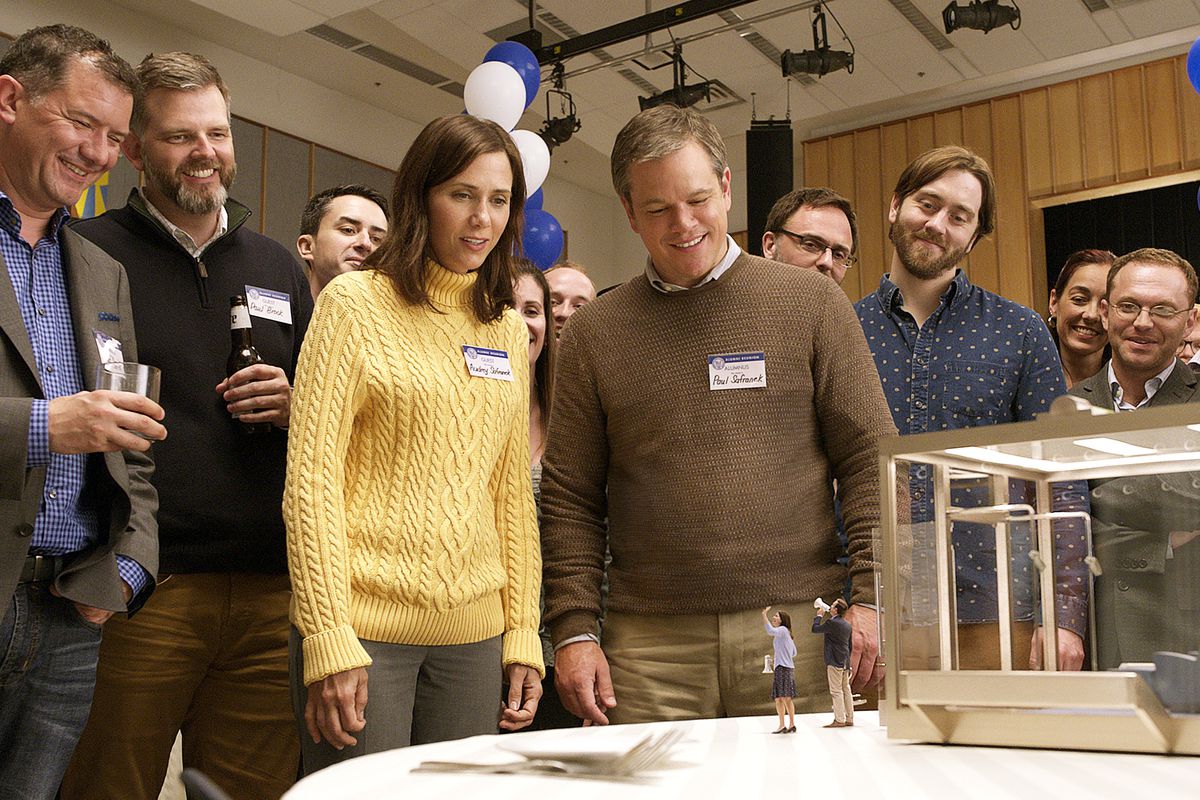 I suspect that if I were very big, as Book One of Gulliver’s Travels allows me to imagine, I would want to be small again. Yet my children long for the opposite. They dream of being big, in part because their size limits them. Little do they know—and so I tell them—about the pains and sufferings of the big bad adult world, in which many adults, seeking to avoid their lives in that world, act like children.

“Downsizing,” the new movie by acclaimed writer-director Alexander Payne, imagines adults who have experienced that big adult world and therefore wish to be small again. To be precise, they wish to be shrunk to 1/2744th of their current size. Through a new scientific breakthrough, human beings can be miniaturized. This allows them a comfortable life of ease in a “microcommunity”—a miniature colony for downsized humans. They experience the world of tininess the way that Gulliver does, but without fear of death by cat or mosquito.

There are great advantages to miniaturizing. Its invention, as the Norwegian scientists who discover it realize, is an environmentalist’s dream. If most humans are shrunk, global ecological catastrophes might be averted, simply because tiny humans will use far fewer resources and will be far less environmentally destructive. Downsizing is thus encouraged as a way to “save the planet.”

But, as often happens to ideologically-based causes, downsizing becomes a mostly personal issue driven by microeconomic motives. As one character says to another, downsizing is not about saving the world. It’s about “saving yourself.”

This advice is given to the movie’s main character, Paul Safranek (Matt Damon), a nice guy from Omaha who is too deep in debt to afford the suburban house of which he’s always dreamed. He wants a better life, but what can he do? If he undergoes the miniaturization procedure, his net worth of $152,000 would essentially turn into $12.5 million. He can retire and live grandly, buying big houses, diamond jewelry, and one-dollar Cuban cigars.

Paul and his wife Audrey (Kristen Wiig) decide to get small. Their only problem is that downsizing is a major life transformation; all miniature humans must leave their old lives behind. So, while Paul goes through with the procedure, Audrey gets cold feet and does not. Paul wakes up a mini-human all alone, his wife having effectively separated from him.

“Downsizing” is best watched, I think, as the sprawling biography of Paul Safranek, an ordinary everyman who has to figure out what life is about. When he’s welcomed into the microcommunity, he’s greeted with the phrase “Welcome to the good life!” But Paul begins to realize that his new mansion and affluent lifestyle are neither “good” nor life itself. He’s friendless, uncharismatic, single, overweight, and bored. Downsizing, which seemed like a great life choice, exacerbates all of Paul’s problems.

This theme of an ordinary schlub’s search for meaning is one that Payne has explored in some of his other outstanding movies, especially “About Schmidt,” which featured an overweight Jack Nicholson searching for some purpose for his life after retiring from his job and becoming a widower. Damon’s Safranek feels something like Nicholson’s Schmidt, and he also resembles Miles in “Sideways,” another Payne movie in which a pudgy Paul Giamatti plays a divorced sadsack who lives with little purpose except to enjoy wine.

The main question for Safranek is in fact that perpetually nagging question for all of us, no matter how old we are: “what is a good life?” Unlike Nicholson’s character in “About Schmidt,” Safranek is young enough to explore and change and to have grand adventures. He’s eventually befriended by his party-loving Serbian neighbor, Dusan Mirkovic (Christoph Waltz), and then by Mirkovic’s maid, Ngoc Lan Tran, who in many ways is the life of this movie.

About Ngoc Lan Tran, played memorably by Hong Chau, there is too much to say. She was a brief TV news celebrity whose fame Safranek is awed by. (One of his faults, as an aw-shucks Midwesterner, is that he is too easily awed by a tiny degree of celebrity.) Yet her fame has not done her much good. Safranek realizes that Ngoc, a miniaturized immigrant with only one leg, is far more interesting than her celebrity status. She shows him the other side of the miniaturized colony, one we did not suspect or think about, which changes Safranek’s life.

Safranek realizes, gradually and with some difficulty, that he has a unique set of skills which has prepared him for an unexpected calling. He knows Spanish, he has worked as an occupational therapist, and he has a way with patients in pain. Should he really retire to a miniaturized McMansion and waste those skills? Safranek is presented with several moments in which an escape from troubles would seem to solve his personal problems. He must keep asking himself: should I try to escape troubles for the sake of my own pleasure?

Most people, critics included, have had trouble with “Downsizing.” Its Internet numbers, RottenTomatoes ratings and the like, are somewhat poor. Admittedly, this is not a movie that will win anyone over with its emotional highs. My guess is that “Downsizing” will be put in the “cerebral movie” category when it’s released on Netflix or Amazon. Given its science-fiction premise, the cerebral label would fit.

I was less captivated by “Downsizing” than I have been with other Payne movies, including his last two wonderful efforts, “The Descendants” and “Nebraska.” And yet the concept in itself, the miniaturization of humans, is a fine speculative premise that’s well done here. It reminds me of good Golden Age science-fiction, including Richard Matheson’s novel, The Incredible Shrinking Man. If there were ever a long, very happy episode of “The Twilight Zone,” “Downsizing” would be it.

Additionally, Payne’s unique ability to make film-art on the razor-edge between seriousness and satire is on fine display here. Should we feel sorry for Safranek, or should we mock him? Should we side with or laugh at the environmentalists who appear later in the movie? I suspect that various audience members will react on all sides of those spectrums. Pool all of those reactions and you might get something special. Perhaps the value of this movie will be in watching it in groups and discussing it. Those groups will have much to chat about; the movie discusses environmentalism, immigration, economizing one’s life, the social division between economic classes, love and friendship, and the purpose of life itself.

And, should I be in one of those groups—thank you for asking—I would claim that Payne subtly champions a kind of local liberalism here, ala Frank Capra. Safranek finds that human suffering can only be alleviated on a personal, human scale. Global issues, including worry over the Sixth Great Extinction and possible ecological decimation of Earth, are something of a detriment to important charitable causes that we can do something about here and now, such as local poverty and hunger.

In that way, “Downsizing” is the same vicinity as a similar movie with a fantastical premise: Harold Ramis’ “Groundhog Day,” starring Bill Murray. Murray’s character in “Groundhog Day” learns to love a local place, the town of Punxsutawney, Pennsylvania, which in the movie’s beginning he thinks is a podunk town of no consequence. Murray’s goal resembles what Safranek discovers in “Downsizing”: we must use our talents for charitable causes that benefit our neighborhoods. Although we are small humans, we can make big differences in our own homes and very local communities. In “Downsizing,” Safranek’s story literalizes this “small human making a big difference” point.

“Downsizing” has a similar query: if you were going to be miniaturized, why would you want to be? To get rich? To save the planet? Or something else?

And, whether you are big or small, what is your life for? What is your purpose and calling? What can you do with what you’ve got, even if you are small?