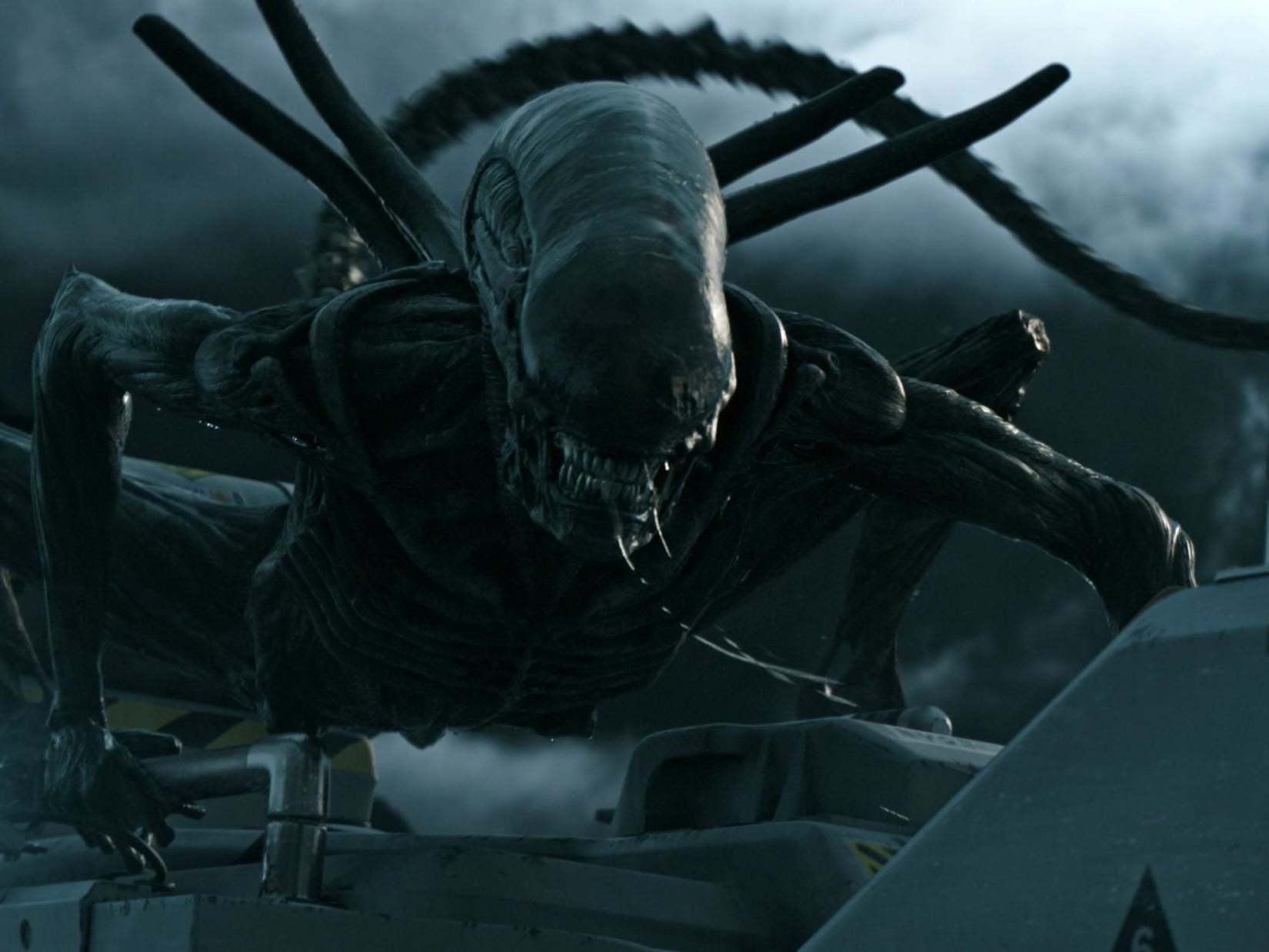 Alien: Covenant is the sixth movie in a franchise that is running on fumes.  This Covenant movie is a sequel to Prometheus (2012), which was a prequel to the first four Alien movies (1979-1997).  The best part of Prometheus, which was mostly lame, was Michael Fassbender’s synthetic android, a character named David.  In that role, Fassbender proved that he was born to play an android.  Here, in Alien: Covenant, he reprises that role and also plays another android named Walter.

We’ll get to David and Walter in a few paragraphs.  First, other than a short opening scene, we don’t see the show-stopping David until about an hour into the movie.  What we do see early on is basic science-fiction fare: a crew of a colony ship, the Covenant, awakens early in their mission because of a space disaster.  They receive a strange communication from a habitable planet and decide to follow the lead.  They land, they search for the source of the communication, and things aren’t as great as they seem.

That takes about an hour, most of it ambling along with no character development and little acting prowess.  I should say that Alien: Covenant repeats much that’s already been done far better in the first three Alien movies. The slow build-up in the opening hour nods to Alien (1979), which does the same.  (Other elements repeated: Aliens who hunt humans one-by-one, Aliens who burst out of human chests, and POV shots of Aliens on the prowl.)

Unfortunately, Alien: Covenant does nothing by going slowly.  I remember most of the characters from the first Alien movie excellently because of its pace and its dramatic tempo increase late in the movie. From memory: Tom Skerrit as the captain, the creepy android, John Hurt as a scientist character, Sigourney Weaver, the two wise-cracking mechanics, and so on.  Already, one hour after seeing it, I have forgotten just about every human character in Alien: Covenant.  The only memorable character in this first hour of Covenant is Walter, who is like David because he is also played by Michael Fassbender, only Walter has an American accent whereas David’s is English.

Let’s finish the plot description, though.  The crew members land on the Earth-like planet and find the ship Prometheus. This ship was featured in Prometheus, and we find out that it crashed with apparently no survivors.  Meanwhile, deadly plants release microscopic black spores into the air, which quietly enter into the brains of two crew members.  This we have seen on Star Trek: The Original Series, when it was already a parody of itself fifty years ago, but Covenant doesn’t care about that or much else that might be artistically complex.

Within a few minutes, the spores kill the crew members by turning into miniature white Alien creatures.  Blood and screaming ensue.  After a few deaths, the rest of the crew is rescued from the Aliens by David, who brings them to a massive necropolis.  Here, David meets Walter, and we get a couple of scenes where Fassbender talks to Fassbender.  These, along with the shots of the necropolis, are among the most compelling moments of the movie.

If Alien: Covenant had focused more on the David/Walter material, it would have been quite the show. Fassbender is a commanding actor whose radiance on-screen obliterates just about every other actor in this movie.

Unfortunately, Covenant treats us to too much B-movie science-fiction.  The visuals of Covenant are particularly disappointing.  The interiors of spaceships and landscape shots of the alien planet could have come from any decent early-2000s TV show produced by the Syfy network.  It’s strange to think that Sir Ridley Scott would approve the low-budget and inconsistent look of this movie, but while Scott has made many terrific movies (e.g., Alien, Blade Runner, Matchstick Men), he has a host of clunkers in his filmography as well.  The sad truth is that both Alien and Aliens—now nearly forty and thirty-five years old, respectively—are more visually compelling movies than Covenant, despite massive advances in film technology and CGI.

Covenant, as it turns out, tells us the origin story of the first Alien movie.  This is slightly more compelling than George Lucas’ origin story for the Skywalker family in the Star Wars prequels, which was not compelling at all. Although it will be nice for Alien buffs and fanboys to know where the Aliens come from, no casual viewer will care much after seeing Covenant.  The first Alien movie, which by now is a highly influential movie,stands by itself, without needing any explanatory help from a prequel.

One spoiler follows, which is meant for anybody interested.  Covenant tells us that David, the android who would be a creator, is the monstrous originator of the Alien creatures.  He’s a genetic engineer who is, we are told in the opening scene of Covenant, a product of Renaissance culture.  David is likened to Michelangelo’s David; he’s also the invention of a Leonardo-esque inventor. We see direct references to Piero della Francesca, and the vast landscape in the background of the opening scene rivals those of so many Renaissance artworks, including the “Mona Lisa.”

I have tried to figure out what Covenant is saying with these Renaissance associations for the David character, but I have not gotten beyond the simple thought that the Renaissance and the Enlightenment have bequeathed to us the means of our own destruction. David is an idiosyncratic android with no morality, who probably is on the spectrum for psychopaths. He invents the aliens because he wants to and doesn’t care about the consequences, even if they involve environmental destruction or genocide.  Thus, our own creations (David) turn on us by creating their own creatures (the Aliens) that can kill us.

This idea we have seen before, and done much better elsewhere.  What is Covenant but a simplistic rehash of Frankenstein, The Matrix, The Terminator, and every other science-fiction story that warns us about amoral robots?

Somehow, the Alien franchise has turned from a potent discussion of disease, childbirth, and our fear of organisms in nature into a juvenile attempt to discuss artificial intelligence and the consequences of robotics.  That leaves the Aliens without a job. They don’t scare much anymore and they are being outdone by movie androids.  I suggest that they go on strike until they are put to better use.  No more hunting humans until a good script comes along, please.